A Symptom of Cowardice 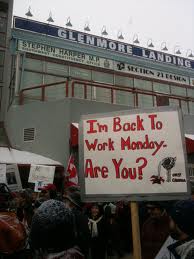 Some commentators such as Jeffrey Simpson have praised Dalton McGuinty for leaving politics at a time of his choosing, on terms of his choosing. But there are others -- even Liberals -- who aren't happy about those terms. Former McGuinty cabinet member and federal leadership candidate Gerard Kennedy is one of them. "I think people should be certainly questioning why this is in place and I still don’t have any understanding as to why this is necessary," Kennedy told the Globe and Mail.

And there is certainly unhappiness among Ontario voters. Lori Turnbull also writes in the Globe that:

This is an unnecessary abuse of the Premier’s prerogative to advise the Lieutenant-Governor to prorogue; the surprise adjournment serves no democratic purpose whatsoever and it prevents the legislature from fulfilling its fundamental purpose – to hold the government to account.


Prorogation has become standard procedure in Canadian politics -- and it has been used for purposes for which it was not intended. Stephen Harper prorogued Parliament in  2008, when he faced a non-confidence vote, and in 2009 when questions about the treatment of Afghan prisoners became impossible for them to handle.This time, Energy Minister Chris Bentley and the premier himself were facing contempt of parliament motions.

Prorogation has become a dodge -- a refusal to be held accountable for one's actions. It has become a symptom of cowardice.
Posted by Owen Gray at 9:30 am

It is time the public said the Mcguinty, "If you are going to go, go now!" An interim leader of the Liberals should then be named and the parliament recalled, so it can get on with the business of State.

There seems to be a division of opinion within the Liberal party over the abuse of the device of prorogation. This could be turned into a revolt with enough public pressure.

Absolutely true, Philip. McGuinty has had a hard time of late reading the public mood.

This could be another example of his having developed a tin ear.

Canada is Harper's garden of evil.

The Campbell/Clark BC Liberals work for Harper. Gordon Campbell was rewarded the post of, High Commissioner to England for his dirty work. Campbell would open Legislature and then bugger off out of the country. Christy Clark is far too busy to call a fall Legislature.

McGuinty suddenly resigning and proroguing? I smell a big fat rat, not mentioning any names of course. McGuinty certainly seemed, stressed and preoccupied about something. I guess it's a wait and see, what follows next.

But, everything in Canada does stink, especially Harper. What a blessing for this country, if only Harper would resign. Millions of Canadians say, Harper cheated to win the election, with his robo-call election fraud. He is certainly trying to quash the investigation.

I think the Liberals are pinning their hopes on Justin Trudeau. He would have a great chance of winning, the younger generations votes. They don't vote because, of the corruption and cheating to win in this country. Their votes mean nothing, so they say.

But, in the end, Anon their votes could make a difference. They could make Stephen Harper the Leader of the Opposition -- if he stayed around long enough to do the job.