A Mob That Is Mad As Hell 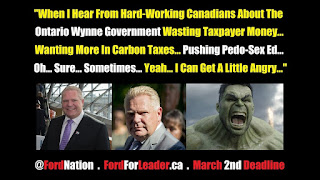 Mere months before the election, the province’s official Opposition sacrificed its leader in a scandal over sexual misconduct allegations; surrendered its official campaign platform in a policy panic; revealed the “rot” and internal wrongdoing in its nominations and machinations; and, finally, bungled the vote count virtually from start to finish, and ultimately in the aftermath.


Yesterday's vote count confirms two things: The party is deeply divided and it's deeply incompetent. Still, polls indicate that just about any PC leader can beat Kathleen Wynn. After the vote count fiasco, perhaps Andrea Horwath can run a "pox on both your houses" campaign and win.

But Horwath has her own problems. The last election revealed that she really doesn't have progressive credentials. And the memories of Ontario's last NDP government -- under Bob Rae -- haven't faded.

One thing is certain: the party of Bill Davis no longer exists. It has morphed into a mob that is mad as hell.

.. watched with the boss.. she hooted n hollered & laughed rolled on th floor at the the shite show. One highlight was Jason Kenney's ludicrous steaming horse shite keynote screetch from the pulpit.. and then something bizarro after from Vic Fideli about great strides made in the last 45 days. What planet do these parasites inhabit? Patrick Brown failed to beam down from hisl Planet Nine adrift spacecraft.. and a guy named Klees destroyed.. slayed.. ripped n tore.. then twas after midnight the Doug claims his throne.. Fortunately, all votes were printed out as PDF.. and hand counted.. after there had been some sort of witchy digital casting upon the computer voty whirled.. It was sensational tellybission.. or fission.. or fusion.. or fussing. No sign of Rick Dykstra and no word if anyone has checked with Kuwaiti officials. Ken Boessenkool has disappeared himself along with most of the p Brown 'braintrust'.. and goodness gwacious.. looky who showed up.. Jenni Byrne! Who next? Ray Novak? Loreen? Can Stephen Harper be far behind? The Ford BBQ coming soon.. !

The whole affair illustrated just how far the "Progressive" Conservative Party of Ontario has devolved, sal.

Sometimes, Owen, I feel like moving to a remote mountain top. With many now proclaiming Ford the premier-in-waiting, increasingly I feel little in common with my fellow Ontarians.


Owen, off topic, I sent you and Lorne an email yesterday. Did you receive it? I'm not sure if any emails are getting out from this new server software I'm using.

My wife and I -- transplanted Quebecers -- have always felt comfortable here, Lorne. We laughed at Rob Ford. But we're uneasy about where the province is headed.

I'll send you a test email, Mound. Let me know if it gets through to you.

I'm with the doomsayers, I don't trust the baser instincts of Ontarians. Ford has let the dogs loose, and I don't want to see the end result. Wynne was dead meat months ago and the electorate know it. Angry man Ford will capture the angry votes and enough of them to take him over the top.

The only hope now is that Horvath, if she ever emerges from her bunker, can appeal to progressive tory liberal hating voters to cut Ford's numbers. Then we watch out for an 'accord'.

Ford's rise is deeply disturbing, Ben. Ontarians should know what they're getting. He's no gift.

if the mob does what it did in the U.S.A. they might wind up with the same problems.

People may not like Whynn, however, how will Rob Ford make things better in Ontario. Part of his base is the holy roller types, sort of like the Jason Kenny camp. Sure Rob will cut taxes and along with your health care, roads, transport, seniors care, policing, fire, etc.

In B.C. we had 16 years of the B.C. Lieberals (more like Cons.) and what we got was over crowded schools, homelessness, over crowded hospitals, unaffordable housing, and major cities being bought up by people from Communist China. We now have an NDP government and although not perfect they are building schools and hospitals. its a start.

People of Ontario might remember that line about taxes: Its what you pay for a civilized society.

Exactly, e.a.f. As one commentator here said, "Rob Ford knows what he believes -- but he doesn't know much."