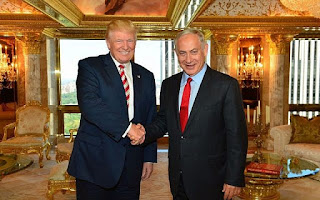 Trump was born into serious money, while Bibi was educated in a series of prestige institutions. Yet both pose as the plucky champion of the excluded, persecuted by the same permanent, snooty elite that has kept the little guy down for so long. “We are being attacked all the time, every minute and every hour,” Netanyahu complained on Thursday. “Listen to Israeli citizens who support us and who want justice.”


But the courts in Israel are hearing evidence from those who want justice from Bibi:

Case 1000 centres on allegations of old-fashioned bribery: gifts of cigars, champagne and the like to Netanyahu and his wife, Sara, from a pair of billionaire businessmen who, the PM admits, he helped out, including on “tax issues”. Case 2000 alleges that Netanyahu sought to cook up a deal by which he would use the law to hurt one newspaper in order to boost the economic fortunes of its rival, in return for warm coverage from the latter.

Case 4000 is similar, an offer to a media tycoon to ensure state policy favourable to his telecoms company, in return for positive coverage of Netanyahu from a news website owned by the magnate. What could prove most serious is Case 3000, which accuses some of Netanyahu’s most trusted consiglieri of fraudulently profiting from Israel’s purchase of submarines from a German company. (The PM is not yet officially a suspect in the submarine affair, but as Aluf Benn, editor of the liberal daily Ha’aretz, told me, this threatens Netanyahu most because it touches on the military and national security – areas Israelis regard as “sacred”.


Meanwhile, back in Washington, the evidence supporting cases of money laundering, obstruction of justice and Russian influence peddling keep piling up.

It's no wonder both men greeted each other so warmly at their White House meeting five days ago. There may not be many differences between the two men. But there are differences in their political systems. Freedland delineates them:

The big difference is in their countries’ systems. Ultimately, the only real recourse against Trump is political, by bringing impeachment proceedings in Congress. But in Israel, as the attorney general clarified this week, the law – enforced by institutions doing their jobs, in the face of intense political pressure – demands that an indicted prime minister leave office, no matter how strong his political position.


It will be interesting to see what happens to both men.

Image: The Times Of Israel

Email ThisBlogThis!Share to TwitterShare to FacebookShare to Pinterest
Labels: Trump And Netanyahu

.. uggh ..
I give not a shite re israel and its bizzaro convoluted 'politics'
somewhere along the line, 'they' whomever 'they' are
lost the picture..

The loose lip snarks of El Trumpo
or Andrew th Scheer
or Justin .. set my hair on fire


Any word on whether Bibi will take a quick hop north to press the flesh with his other official sponsor, Justin?

These days, sal, politics seems to reward those who are talented self dealers.

Birds of a feathr, as the saying goes, Owen.

Both men appear to believe that the rules and the norms don't apply to them, Lorne.

I prefer to call them the "two thugs". They look like it and act like it. Lets how the judicial system in both countries catch up to them and jail them.

I don't know who's leading the probe into Bibi, e.a.f, but it's interesting that Robert Mueller was the guy who brought down John Gotti in New York. Mueller knows who he's dealing with.