Some Much Needed Perspective 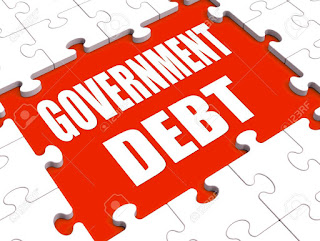 Recently, the government announced that its "market debt" has exceeded one trillion dollars. The news was treated as a bombshell. Former Parliamentary Budget Officer Kevin Page warned, “the $1 trillion threshold is extraordinarily important." But Scott Clark and Peter DeVries write that this is not the first time a Canadian government has hit that threshold:

Under current borrowing procedures “market debt” in its broadest sense exceeded 1 trillion in 2012-13. The government is not facing a structural imbalance between revenues and expenditures or a fiscal crisis; and deficit elimination is not a necessary requirement for fiscal credibility.


It all depends how you count and what numbers you leave out:


The debt of crown corporations did not used to be included in government debt figures. Like other corporations, they borrowed on the private market and that debt was treated as private debt. It was the Conservatives who changed that practice:

In the 2008 Budget, the Harper Government announced that the Government would consolidate the borrowings of the Canada Housing and Mortgage Corporation (CMHC), the Farm Credit Corporate (FCC) and the Business Development Bank of Canada (BDC) into the federal debt program, rather than having them borrow individually in the private market.  It was argued that consolidating the borrowings of these Crown corporations would reduce borrowing costs for them by eliminating the “agency spread”.


The Liberals have re-instated the Conservative method of counting:

In the Debt Management Strategy for 2018-19, the two types of “market debt” are listed because the Government again requires borrowing authority from Parliament in order to undertake any new borrowings above certain limits. The Harper Government had suspended this long-standing requirement in the 2008 Budget. In the Liberals’ election platform, they promised to restore this requirement and the government did so in 2017. They are now being attacked by the Conservative Opposition for being “more” transparent and accountable to Parliament than they were.


So, while you listen to Conservative furor over the Liberals' mounting debt, knowing a little bit of recent history can provide some much needed perspective.

Thanks for putting this into perspective, Owen. I recently wrote about the debt, and while I am still troubled by the Liberal spending that seems to have no specific end goal, your post shows the situation is not as bad as I thought it was.

Mark Twain warned us, Lorne, that there are "lies, damned lies and statistics."

Growing the debt every year, year after year, is not a good strategy. At some point govt will be borrowing money in order to pay the interest.

Govt tells you to focus on the debt/GDP ratio. So, as the debt grows, as long as the GDP grows, the ratio remains the same.

So all that needs to happen is that the GDP grows every year. This is not reasonable, since we live on a finite planet, and especially when we are trying to reduce GHG emissions.

Keynes said that deficit spending worked, Hugh, so long as you paid down debt in the good times. The problem is that governments have forgotten that corollary.


Keeping the federal debt in perspective is indeed important but I share Lorne's concern about the debt in any case. Where is the plan for how we're going to turn this around? Our governments were once capable of paying off debt, even the massive debt of world wars, but they can't handle that sort of thing any more.

Here's an example from the States where every post-war president, from Truman to Jimmy Carter, Democrat and Republican, reduced America's national debt as a function of GDP. Even Johnson and Nixon did that while waging the ruinous Viet Nam war. Then along came Reagan and the advent of the Neoliberal Era. America went from the world's largest creditor nation when Reagan was first inaugurated to the world's largest debtor nation when Reagan handed the presidency to George H.W. Bush. Democrats boast that Clinton balanced the budget but that was sleight of hand. There was so much tax revenue generated by the Dot.Com bubble that the government found itself flush.

My take is that neoliberalism set us on the road to crippling deficits. The neoliberal religion (it is like any other faith-based ideology) operated to transfer as much as possible in the way of property rights and even incidents of national sovereignty to the private sector in keeping with the flawed dogma of Hayek and Friedman. And, like other religions, it needed a bad boy, a Satan, the favourite being taxation. Welcome to the Church of Everyday Low Taxes. Corners would be cut and where they were not to be found they were imagined and cut anyway. Governments would be operated on debt, deferred as much as possible to keep the plebs temporarily comfortable and acquiescent.

And here we are without any plausible idea how to get out.

For the life of me I can't understand why the Canadian government borrows from private banks. The Bank of Canada was set up, in part, to provide low interest loans to government. This worked very well until Pierre Trudeau changed the policy. I assume he held stock in the Bank of Montreal. Government borrowing from private banks transfers tax dollars to them. It is a form of making the rich richer.

Question: is this an issue in NAFTA and other trade deals?

That's a really good question, Toby. And I have no idea what the answer is.

I agree with you, Mound. Countercyclical spending works in economic downturns. But, unless we pay down the debt, we eventually will be in credit card hell -- barely managing to make the minimum interest payment. The debt doesn't need to be paid off in one fell swoop. But it must be paid off regularly and consistently.


Have we forgotten, Owen, or have we indentured our governance to an ideology that almost ensures it will be debt-driven? Have we, in effect, become slaves to debt? How do we possibly get out of this barring some sort of confiscatory tax regime? This reminds me of Tennessee Ernie Ford's "16 Tons."

As Ernie sang, Mound, we "owe our souls to the company store."

Most countries do not have a federal system like we do. Add in provincial debt to the tune of $700 billion (Ont and Quebec add up to $500 billion), and we are no star in the debt to GDP ratio. At all.

We thus have 70% higher debt than the prancing JT and (I'm convinced none too bright) Morneau happily boast to overseas countries unfamiliar with our political system. They wonder how we do it. The answer is, we don't.

It's always taken a little bit of magic to make Canadian federalism work, BM. Perhaps that's why they called Justin's father The Northern Magus. Justin has charisma. But he is not a magus.