The Wrong Side Of History 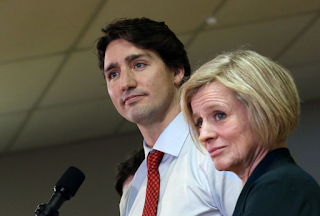 Things are starting to get nasty out in British Columbia. Michael Harris writes:

In the last few days, approximately 30 Canadian citizens have been arrested for opposing Kinder Morgan’s pipeline extension in British Columbia.

A day after that, the Mounties moved in and arrested an unlikely group of villains — Indigenous leaders and “water protectors.” These are middle-aged moms and housewives worried about native rights and the environment, and the odd university student.


The painful truth -- and it is painful -- is that Justin Trudeau and Rachel Notley are on the wrong side of history. They are "a little like the mayor of Asbestos, Quebec before the Jeffrey mine closed — desperately trying to market a product headed for the ash heaps of history."

As someone who used to live half an hour away from Asbestos, and whose job depended on a student population which partially came from there, I can testify that what hit Asbestos was an earthquake. Asbestos is now known for its huge empty hole in the ground -- and we no longer live there.

Either way, an earthquake is coming.  But it will be bigger if Kinder Morgan goes through. The danger to BC's coastline cannot be overstated -- not if you pay attention to the science:

In fact, the science is not on anyone’s side, as internationally acclaimed Canadian scientist David Schindler wrote last week in the Vancouver Sun.

This is how complete the government’s ignorance is on the question of the impact of a major spill of diluted bitumen on the B.C. coast. According to Schindler, no one really knows if the stuff would sink or float. No one knows the actual effect on marine life. No one knows how long it would hang around in the event of a major spill. There is a reason. No one has conducted the ocean research.


Trudeau and Notley are caught between a rock and a hard place. When that happens, history shows it's wise to err on the side of caution. And, as Harris says, the prime minister and the premier are on the wrong side of history.

Image: The Council Of Canadians

Email ThisBlogThis!Share to TwitterShare to FacebookShare to Pinterest
Labels: The Battle Over Kinder-Morgan

The new Trump Doctrine ' Energy Dominance ' will speed up the hit Alberta will take. With the US out drilling and out producing others, prices will inevitably fall in a suicidal race to the bottom. As the producer of the world's filthiest, lowest quality Alberta will be the first to fall.

With the whole industry going broke , who will fund a money loser like a pipeline? How many still want to put money into Enron ?

.. Owen, this is a struggle that must take place on the land. To fight based on whether dilbit floats is defeatist. The issues are far broader and extremely concerning. Once the supertanker is loaded and cast off, neither BC or Alberta or the foreign owned pipeline firm is responsible. Yes yes.. the world class cleanup horseshit & National Interest & Energy Security For Canadians all presented as some sort of political chowder or seafood linguini.

The terrestrial damage will be already be done.. fait accompli. To lands, air, waters, habitat, species, First Nations, electorate. Done like dinner.. and when a supertanker break up on rocks on Haida Gwaii or enroute to Houston in 60 foot swells, what then.. 20 years of suits and countersuits

Who profits? Who is driving this strip the earth & screw the ocean policy. Are we really OK with extirpating bear, orca, eagle, otter, salmon, herring, shellfish, caribou, wolf? That's where its headed.. and those species and their habitat are just some of the creatures locked in the environment & food chains. Its all connected.. they're all connected. Screw one, you just screwed them all.

I want to know where the money goes..
I want to know the taxpayer paid subsidies involved
in the simplistic terms I can understand
We got x number of jobs, x number of temp foreign workers
and foreign owned Big Energy profited how much
and how much we subsidized the process..
I can get by with 50 words or less
if it informs me in a satisfactory way..
I have an open curious mind..

Hell, we know former politicians can holiday on board with
the CEO of one of the most destructive environmental disasters
while governments absolves the owners of responsibility
Mount Polley.. any subsidies there ? Eh ?

Exactly, rumley. Buggy whips used to be absolutely necessary. Now they are quaint reminders of the past.

I agree, sal. This is big -- because everything is interconnected. This is a catastrophe waiting to happen.

Trudeau and Notley, in their egregious dereliction of duty, ignore that the "precautionary principle" has been upheld as the law of Canada by the Federal Court of Canada and the Supreme Court of Canada and refuse to accept the burden that places on them. Trudeau cannot rely on the conclusions of the National Energy Board of Canada that, during the election campaign, he rightly denounced as industry-controlled, rigged, just because he lied his way to power. There's a name for those who operate outside and in flagrant disregard of the law - outlaws.

Money pulls the strings, Mound. And the puppets respond.

An interesting comment, Anon. But it needs to be initialed.