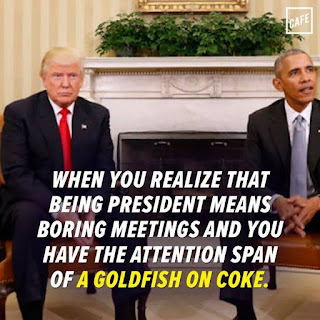 Michael Harris believes that all of Donald Trump's tariff talks will amount to nothing:

My two cents worth is that Trump’s tariffs will fizzle like just about everything else he says. As always, the cycle is the same, first comes the rhetoric, then the weasel words, and finally the reality.

It would pay everyone to remember that Trump conducts himself like a narcissistic, flimflam man off his meds. He resides in a mansion of hyperbole and vanity mirrors. It hardly matters what he says anymore because he so rarely does what he says anyway.


Trump's recent trade rhetoric fits a now well estblished pattern. In the end, it's hot air -- nothing but air:

Remember all those women Trump was going to sue for their “fake” claims that he sexually assaulted them. He never launched a single lawsuit.

Remember how Mexico was going to pay for the Trump Wall? Congress has now been handed the tab.

Remember how he was going to scuttle Obamacare and how “easy” it was going to be to replace it? There is still no replacement for Obamacare.

Remember how Trump warned that the special counsel in the Russia investigation would be crossing a “red line” if he investigated Trump’s business dealings? Mueller is now investigating the whole damn clan, including the president, and he’s still on the job.


There is a reason, however, for all the hot air:

Coincidentally, a Pennsylvania Republican in the heart of steel country is set to face the people in a special election in just over a week. Trump is desperately trying to hold onto the congressional seat vacated when the pro-life Republican incumbent was found to have counselled his mistress to have an abortion.


Trump can only think short term. He doesn't have the attention span for sustained thought. So we'll  see how sustained Trump's tariffs will be.

This Michael Harris guy is a real flake. Trump has stuck to his promise to end bad trade deals right from day one when he stopped Obama from imposing the TPP on Americans during the lame duck session.

He followed through on that by renegotiating NAFTA - which keeps far-right free-trading ideologue Justin Trudeau up at night. (Junior signed onto the TPP and wants to do free trade with China. Policies "progressives" were fiercely opposed to when Harper was working on them.)

Trump's new tariffs are just the start. If neoprogressive sky-screamers had brains they would see the opportunity Trump is affording the world by single-handedly taking on free-trade globalization and the fascist global oligarchs who profit from it.

With a tariff system in place, global wealth can be fairly distributed via social tariffs and environmental policies enforced via green tariffs.

A free-market globalized economy is anarchy on all fronts. It's impossible to control or regulate. It leads to all sorts of abuses from the revival of slavery (more slaves now than during the entire Trans-Atlantic Slave Trade) to skyrocketing global GHG emissions. (Turns out you can't eliminate global emissions by exporting them to China despite how much you gouge the people!)

That's the problem with the Left: they are eternal whiners and complainers. They never get anything accomplished because they are triggered infants who don't know the first thing about the real issues.

Triggered infants, GenX? I'm the first to admit the flaws in the global trading system. But you can't reform it on an impulse. Trump's imposition of tarriffs was done on an impulse. It is he who is the infant.

It was Jeb Bush who predicted that the man he called the "Chaos candidate" would be the "Chaos President." His prediction has proved true -- on an almost daily basis.

.. Well Gen X - I come from no political direction.. neither left nor right or center.. and tho admiring your velocity & exhaust system noise levels.. believe you are full of it. Nevertheless a shrieking loud cry from yerself.. perhaps a budding political figure.. or just a sadass trumpfan troll.. who's to know? A waste of 15 seconds of my life because I can speedread and know the smell of utter horseshite.. So I decided to spend another 60 secs letting you know so.. Did I leave anything out? Did you catch my drift ?

If desperate for attention - perhaps say so in 10 words or less..
And I will provide an email addy you may vent upon
and at my discretion may waste another 60-90 secs

But it might be polite
if you did not burden Owen,
a gracious generous host
with such tripe..

Did I get through to you ?
He's a very patient & seemingly kind man
but your diatribe seemed.. uh,
from the way way out there in crudeland

I try to say this in a kindly way

I agree, sal. Harris is one of our best journalists.

This 'salamander' character is quintessential neo-prog: a self-righteous fanatic filled with hatred and bigotry against anyone with a different opinion – and completely unable to provide a counter argument. (Not a single point among all that gibberish.)

Funny how void-worshiping cultural Marxists are just as sure of themselves as religious fundamentalists who believe God is acting through them. And like them, they don't need any information outside of their bible – they already have all the answers! (Too bad almost all of them are wrong!)

But look at the facts. The corporate Fake News media has been absolutely hysterical over Trump's anti-free-trade policies ever since he killed the TPP – since before his inauguration. Now this left-wing Fake News journo comes along and says Trump is not doing anything on the trade file?? Give me a break!

The 'left-wing' is a crazy cult of lies. You have neoliberal weasels on the one hand telling people free-trade globalization creates wealth and jobs – great for the "middle class." (Great at eroding it. Great at pointing out they think workers and the poor are 2nd-class citizens.) Then the neo-prog tail – always trying to wag the neoliberal dog – always failing – can't bear the idea that Trump delivered on a promise that their 'progressive' politicians only ever lied about. Why? Because corporations conditioned them to craziness!

Welcome to the Machine.

The issue isn't -- or shouldn't be -- whether or not Trump delivered on a promise, Gen X. It's whether or not the propmise was a good idea in the first place. Take a look at yesterday's post -- and read Paul Krugman's column. Trump makes promises. But, as his biographer David Kay Johnson -- who has been covering him for years -- says, "Donald doesn't know anything."

Keeping a promise which is rooted in ignorance is no badge of courage.

Krugman is a neoliberal weasel and pretend Keynesian. Take a look at the US trade deficit. It exploded beginning with Reagan and the neocon/neoliberal era. (It was in balance during the Keynesian 'New Deal' post-war era.)

Since 1981, the US has lost 94 percentage points of GDP in trade deficits. In today's dollars, that's $17-trillion! According to standard economic theory, trade deficits have accompanying budget deficits. These have added up to $19-trillion since 1981.

Now the wolves in charge of the hen-house are not happy enough having looted all this wealth. They want to ramp up free-trade globalization with the TPP, free trade with China and hemispheric open borders across the Americas.

Krugman knows what he's talking about too. Unfortunately, he's getting paid to say the opposite. (Ricardo's 19th-century economic theory – which economists take as gospel truth – says countries should maintain trade balances. That mercantilism is self-defeating. That is, of course, unless you're selling your country out to third-world oligarchs for a percentage – which is why we live in the most mercantilist global economy in history.)

As for the wolves in charge of the hen-house: these void-worshiping nihilists are animals. They have absolutely no self-control. They think there's an inexhaustible supply of wealth they can leech from the body economic – which they tear away at like a school of lampreys.

Like serial killers, they cannot stop themselves. They can only be stopped by external forces. In history, their excesses have caused great depressions and subsequent progressive reforms. Last time they crashed the economy, Hitler came to power.

Trump is literally saving the world from collapsing into WW3. If he fails: this crazy barbarian world of lies had it coming. (You won't be missed. Life will go on in the universe, where it is respected.)

... you are a person.. nay, a sage
of great generosity & patience

as my son might say
I am but a tilter at windmills..

You've misread, Krugman, Gen X. He's no neo-liberal. He has, however, devoted his career to the study of international trade. And, in the process, he won the Nobel Prize in Economics.

As for you're claim that Trump is saving the world, it is -- like Krugman's characterization of Trump's tariff plan -- "surpassingly stupid."

Your comments are always sage and insightful, sal. Gen X has been drinking the Kool-Aide.

A logical-fallacy appeal-to-authority referencing someone in a field as corrupt and incompetent as economics is exceedingly stupid.

That you people can't handle your own in a debate and adopt some position of superiority without providing a single argument to support your position is exceedingly stupid.

Tilting at racist windmills to afford some easy, fake virtue when all the systemic racism happens in Big Liberal Cities is exceedingly stupid.

Being in a constant state of hysteria because corporations manipulate your emotions to various self-serving agendas contrary to your own well-being is exceedingly stupid.

Dismissing rational arguments supported with dozens of facts as "drinking the Kool-Aide" is exceedingly stupid.

Suffice it to say you exceedingly-stupid Baby Boomers – who pissed away the prosperity your parents built up – are the reason Donald J. Trump is president today.

The reason Trump is not piling failure on top of failure with the same failed neocon/neoliberal economic policies that got us where we are today is because he's the only president with any brains since Reagan brought these ultra-failed economic reforms.

Trump's hysterical, uniformed, cliquish, void-worshiping detractors are the ones looking bad – they're just too exceedingly stupid to notice.

You're back again for a fourth go around with a new handle. Eventually your tone, your favouirte phrases and your bile give you away. Once again, good-bye.