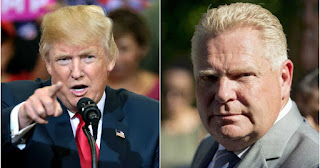 In some ways, Doug Ford is like Donald Trump. But, Robin Sears writes, Ontario's Liberals and Dippers would be wise not to treat Ford the way the Democrats treated Trump:

It seems likely that without serious discipline both the NDP and the Liberals will make the same mistake as the American Democrats did with a curiously similar nightmare in 2016.

Attacking Donald Trump for a year in primaries drove into the ground a dozen serious GOP competitors’ campaigns. For every attack on his ineptitude, his vulgarity and his complete absence of preparation for the role, Trump would smirk, roll his eyes and say, “Of course, the elites will say that about me! What better proof do you need that I’m on your side, not theirs.” Doug Ford will play the same card.


The Conservatives were extraordinarily inept when it came to choosing a leader:

The astonishingly inept performance of the Conservative leadership election team has delivered a one-term municipal councillor — who lost on popular vote, and in the number of ridings won — to be on the verge of taking power of Canada’s second most powerful government.


And it's the party's -- and Ford's -- own ineptitude that Sears believes is the best line of attack for both the Dippers and the Liberals:

My best guess as to where each is likely to go is to jump on gaffes that they have prodded Ford into: he is a very green, hot-tempered and unprepared candidate.

One can easily see the second-tier Team Ford being incapable of imposing enough discipline to ensure that at a talk show, evening rally, or worst of all, television debate, Ford is not goaded into saying something inappropriate on any of a dozen subjects.

Email ThisBlogThis!Share to TwitterShare to FacebookShare to Pinterest
Labels: How To Deal With Ford

In my view, the American election wasn't so much a referendum on Trump as a referendum on Clinton and whether a woman could be president. The media gave Trump literally billions in free airtime so that he could say outrageous and inappropriate things on dozens of subjects, most notably on ethnic minorities and women, and especially on Clinton. The media carried Trump's "lock her up" rallies live and made no attempt at balance with Clinton rallies.

Far from hurting him, the more Trump lied and was obnoxious, the more he pleased and motivated conservative voters who have been programmed by years of Fox, Rush, Alex Jones and countless other conservative hate mongers.

The same dynamic is now in play in Ontario, where we have a white, male, allegedly Christian blowhard running against two powerful and competent woman who the conservative media have spent years trying to make unpopular. The media will make this a referendum on Wynne, not Ford.

Verry insightful, Cap. There were a lot of forces lined up against Clinton. And the opposition against Wynne will be fierce.