Willy Loman In The White House 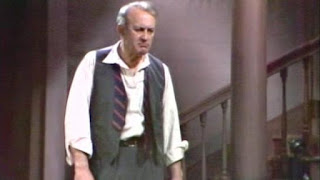 Arthur Miller's play, Death of a Salesman goes to the core of the American character. Willy Loman, the chief protagonist, fervently believes in the American Dream. And he believes that the key to that dream is being "well liked." E.J. Dionne writes:

All presidencies are shaped by the personal proclivities of the occupant of the Oval Office. But we have not had a president who focused so much energy on appearing to be strong and who, like the playwright Arthur Miller’s salesman Willy Loman, so desperately wants to believe he is “liked.” These drives are the biggest threats to Trump himself, and, I fear, to our republic.


Donald Trump's need to be liked drives everything he does. Consider the two initiatives he launched last week -- his decision to put tariffs on steel and aluminium and his decision to meet with Kim Jong Un:

The tariffs may, in fact, serve him well in the short-term. Note that Trump initially reached his decision to impose them when he was feeling “angry” and “increasingly isolated,” as Washington Post reporters Philip Rucker, Ashley Parker and Josh Dawsey wrote on March 3. With the investigation by special counsel Robert Mueller gathering steam and other scandals dominating the airwaves, Trump did what he always does: He sought to change the subject and shake up the news cycle.

But there is more. If Trump and the Republicans have reason to worry that the political energy of his foes could play out in substantially increased Democratic turnout in this November’s elections, there is a second danger almost as serious. His working-class supporters — the key swing group in the states that gave him his Electoral College victory — have little to show for his presidency.


Recent economic data confirm that things are not getting better in Trump Country:

While last Friday’s robust jobs report provided continued good news overall, it found that wages were nearly flat. And as Post blogger Greg Sargent observed last week, economic growth remains concentrated in the states that rejected Trump. “Trump Country” is not experiencing the renaissance he predicted, in part because he could not have kept his outsized promises in the first place.


Along with the tariffs, Trump's  meeting with Kim allows him to cast himself as The One And Only:

On Friday the White House conditioned the entire initiative on “concrete steps” from North Korea without specifying them. But there was a Trumpian point to it all. He was doing something no other president dared do while casting himself in a starring role.


Stars are stars because the public likes them. And the measure of how well they are liked is ratings. Trump consults his ratings as passionately now as he did when he appeared on The Apprentice.

However, the problem of wanting to be well liked -- Willy Loman's brother-in-law, Charley tells him -- is that it's always based on crude self interest. In the end, such a man is "a man way out there in the blue, riding on a smile and a shoeshine."

In the end, that's all that Donald Trump brings to his job. He's Willy Loman in the White House.

Image: Digital Theater Plus
Posted by Owen Gray at 9:43 am

Email ThisBlogThis!Share to TwitterShare to FacebookShare to Pinterest
Labels: Donald And Willy

.. can someone point out a more needy whiner than Donalto der Trumpto ? .. The Retrumplican scumbags a good place to look.. in the land of greed, dirtbag rabbit hole ethics and deceit.. Land of the free, home of the brave.. sure, right..

Trump is the only person I can think of, Owen, who would read Death of A Saleman as an instruction manual, not a cautionary tale.

I agree, Lorne. And that's why I can feel sympathy for Willy but nothing but contempt for Trump.

good article. Yes, as they used to say in show business, you're only as good as your last movie was.

Death of a Salesman is one of those books which always stays with you, like to Kill a Mockingbird.

Things haven't improved, because quality of life hasn't improved for many in the U.S.A. and in the end, what may bring him down is simply a few nasty pictures taken by Ms. Daniels. it really doesn't matter how he goes down, as long as he does. He serves no useful purpose in the grand scheme of things.

I'm more and more convinced that it's all going to come down around Donald ears, e.a.f. But, unlike Willy Loman, most people will feel no sympathy for Trump.