It's Going To Be Awhile 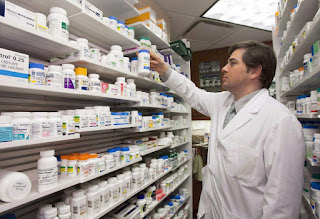 In Tuesday's budget, the Liberals announced the beginnings of a national pharmacare program. But, later in the week, Bill Morneau told the Economic Club of Canada, "We need a strategy … that deals with the gaps but doesn’t throw out the system that we currently have.”

That gap is glaringly apparent here in Ontario, as well as other provinces. Tom Walkom writes:

In Ontario, those under 25 have publicly funded access to necessary drugs. Except for welfare recipients, those between 25 and 65 do not.

Most provinces have some kind of catastrophic drug coverage. But only those who must spend vast chunks of their income on pharmaceuticals qualify.


Pharmacare -- like medicare -- must be a universal program. There are good reasons for making it universal:

It is like medicare in this and offers the same advantages — including the efficiencies of a single-pay system. It costs governments money but creates savings for everyone else.

Study after study calculates that — as with medicare — the savings outweigh the costs.


But it seems to take time for that fact to sink in. Consider the history of medicare:

When Canadian medicare was being debated in the 1960's, a similar division arose between those who wanted a full scale universal program and those who, like Morneau today, merely wanted to fill the gaps.

The gap-fillers were tenacious. Ontario Premier John Robarts, a Conservative, refused to bring his province into medicare until 1969. Alberta didn’t join until then-premier Ernest Manning, a fierce opponent of universal social programs, retired.


It looks like it will be awhile before we see phramacare.

Email ThisBlogThis!Share to TwitterShare to FacebookShare to Pinterest
Labels: Pharmacare

Owen, I have been reading a lot lately on how scandanavia works and it is pretty simple.the countries are mostly conservative and strongly capitalist with one big difference. Business is left to what it does best with high royalties used to fund emergency and retirement programs and the government provides those services via taxpayer money that voters want. The socialist paradise of decades ago failed and is gone and replaced by a better system that lets everyone do what they do best. The model is there for anyone to copy if they want to.
The flip side of the coin was reveiled when the wave of refuges poured in and swamped a system balanced to the existing population. There are no excess services for people who haven't paid into them under this system and all immigration has to go through a combined department of education, social services as well as immigration so that native workers have every opportunity at available jobs while immigrants fill in shortages and most importantly pay taxes to fund their share of the benefits of living there. Unfortunately there is no room for the word refugee unless they have useable skills. it is ultimately cheaper and more effective over the long term to provide assistance in these situations at the source.
Maybe we can only hope that discussing pharmacare will lead our own country to looking at realistic solutions to our many problems rather than our crumbling education and health care programs to mention just two.

As long as the current incarnation of the Liberal party exists, Owen, I think a real pharmacare program will remain solely in the aspirational realm.

The NDP pushed the Liberals into medicare, Lorne. They may do the same with pharmacare.

To implement pharmacare we don't have to re-invent the wheel, bill. Walkom points out that "with one exception, every developed country with a universal health insurance system also offers its citizens universal pharmacare. That exception is Canada."

We might have to tweek the template, but we're not flying blind.


Real pharmacare? Sorry, my fault. I just never got past the electoral reform promise. Oh dear.

If you get a reputation for being all hat and no cattle, Mound, the floor falls out beneath your feet.