What Will We Do About Myanmar? 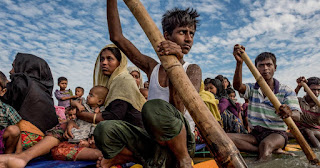 When the slaughter in Rwanda occured -- twenty-five years ago -- the nations of the Western world pleaded ignorance. Gerry Caplan writes:

Many in the Western world were indeed ignorant about the situation, which is one of the explanations later adduced for the failure of the “international community” to intervene and stop the slaughter. Most Western newspapers and TV networks either didn’t know or didn’t care about a tiny nation in Central Africa called Rwanda. For many, their negligible interest in Africa was appeased by the first free election in South Africa, which happened to take place in the same month, April, 1994, that the genocide began.


The West made a collective vow that it would never  happen again. It did not take long before that resolve was tested:

The first test case − the “next Rwanda” − came soon enough, as the government of Sudan unleashed mass death against the Darfuri people in the west of the country in 2003. The New York Times’ Nicholas Kristof wrote column after outraged column on his first-hand observations in Darfur. Movie stars investigated and spoke out. A worldwide grassroots campaign materialized. Thousands of Canadians added their voices.

U.S. President George W. Bush and his Secretary of State, Colin Powell, both agreed that a genocide was being organized against the people of Darfur . . . somehow, that did not impact American policy. Despite the provisions of the 1948 UN Convention Against Genocide, neither the U.S. nor any other government took direct action against the government of Sudan.


And now we are faced with the slaughter of the Rohingya in Myanmar:

Millions around the world seem to care about the fate of the Rohingya, none of them with any power to intervene. The UN’s human rights chief, Zeid Ra’ad al-Hussein, reports that Myanmar’s military have committed “acts of genocide” against the Rohingya people. Yet the UN Security Council is paralyzed, this time by China, just as it was paralyzed by Clinton’s America over Rwanda.


Will we do something?

Tony Burman, the excellent Canadian foreign-affairs columnist, [is] pressing hard for some kind of intervention – ANY kind, almost. Mr. Burman wants Canada to get involved, and we can surely be certain that when Bob Rae – a wise and sensible man — soon hands in his report as the federal government’s special envoy for the crisis, he too will call on Canada to take action of some kind.


We have volunteered to go into Mali. What will we do about Myanmar?

Email ThisBlogThis!Share to TwitterShare to FacebookShare to Pinterest
Labels: The Slaughter In Myanmar

There's always a lot of hand wringing and calls to do something. Nobody seems to know what that something is. There is often a touch of magic desired in the request. More often than not we get involved in somebody else's civil war to no useful end.

It's never wise to get involved in someone else's civil war, Toby. But can we stand aside when systematic genocide is taking place?

It seems we in the West are fated (or content) to do our hand-wringing after the fact, Owen, not during a crisis. Such displays of 'conscience' are much easier and cheaper to manage, I would imagine.

It's much eassier to have a conscience, Lorne, when it doesn't come with a price.

Owen, what actions would you propose? What could actually solve the Myanmar problem? What do you suggest that will not make things worse. We have seen recent solutions in Afghanistan, Iraq, Libya, Syria and other places. Uttering "Tut tut" at Myanmar generals seems to be a non-starter. Just demanding that we do something doesn't help.

Having a corrupt military rule in Myanmar serves somebody's purpose. Who? Frankly, I think that the bankers who finance corrupt governments and the arms traders who profit from terror should be pilloried and exposed for the demons they are.

Owen, I know I'm a bit foggy about this stuff but I always remember that every war has a banker wringing his/her hands with glee. Somebody is profiting from the Myanmar mess.

I'm quite sure someone is profiting, Toby. But it's worth remembering that carefully applied sanctions -- aimed particularly at those who profit -- can be effective. It was sanctions -- not a military invasion -- that brought down Apartheid in South Africa.


Owen, don't sell us short. Please don't underestimate our ability to look the other way when genocidal atrocity rears its ugly head. Even Romeo Dallaire didn't get some rapid reaction support from Ottawa when Rwanda fell apart. And we did a sterling job when five million civilians in Congo were hacked to bits.

Face it. South Asia/Africa are, to us, pretty low value territories. Cyprus, different story, those were white people more or less. Libya, same, same. Kosovo, sure.

We'll go into Mali but that'll be a minuscule drive-by, support mission. A gestural sort of thing. No real "boots on the ground" effort.

Burma? We're not ready for that. We're not trained or equipped for a dust up in a place like that.

Owen, if we Canadians really want to have an effect than we should start at home. How about with EDC?
https://www.edc.ca/EN/Country-Info/Pages/Burma-Myanmar.aspx

Sure didn't take long for our "partners" in democracy to take out a leader in Chile and replace him with a rabid dictator, did it.

And while I hear lots of "oh woe is me" regarding the situation in Myanmar, I can't honestly say I understand or have had the situation clarified enough for me to understand, but from afar it looks like another internal struggle over religious differences. My father came from northern Ireland, we as a family, understood all to well the strife that religious differences and who wants to control who can bring.

I agree that we're not equipped, Mound. But we should ask ourselves where do we see ourselves and why.

I agree, Toby. As Deep Throat advised Woodward and Berstein, it's always wise to follow the money.

Thanks for the link, Toby. The data is basic to understanding what is going on in Myanmar.

It's true it's about religion, Lulymay. Bu, as was the case in Northern Ireland, it's about power -- who has it and who doesn't. And that fact makes things complicated.