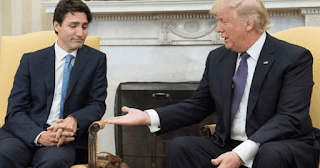 Lately, things have not being going well for Justin Trudeau. He's still trying to recover from his gaffe filled trip to India. But, thanks to Donald Trump, he has the opportunity to burnish his bona fides. Lawrence Martin writes:

The U.S. President has upped his reputation for running a gong show with his admission that he had no idea what he was talking about when telling the Prime Minister the United States runs a trade deficit with Canada.

He just made it up, the President admits on an audio feed from a private fundraiser on Wednesday. Didn’t know what he was talking about.

The confession, a rather unique one in the annals of relations between presidents and prime ministers, is a big boost for Ottawa negotiators in the trade debate, undercutting the credibility of the American posture. The Canadian side has been making the point about the U.S. having a surplus repeatedly over the last year. Washington has twisted statistics and data to claim otherwise.


Canadians have long suspected that Justin doesn't have his father's backbone. But Donald Trump is the perfect foil.  And Trump's economic advisor can also give Justin a boost:

In fact, Mr. Trudeau has the upper hand and it is getting stronger. Larry Kudlow, the President’s newly appointed director of the National Economic Council, says it makes no sense to go after Canada. While alleging that Mr. Trudeau is “a left-wing crazy guy,” Mr. Kudlow added that exiting NAFTA “would be a calamitously bad decision.”

Mr. Trudeau has been right it to make it clear to the President there won’t be any capitulating on trade negotiations in order to avoid tariffs. If a trade war breaks out, Canadians are likely to support their PM. Standing up to presidents when there are grounds to do so has worked in the past. It will likely work with this drama king.


Of course, Justin could step in it. But make no mistake. He knows Donald Trump can serve his interests.

Email ThisBlogThis!Share to TwitterShare to FacebookShare to Pinterest
Labels: Trump And Trudeau On NAFTA

.. so many variations on that hoary old proverb..
when your adversary is setting themselves on fire
when the foolish are broadcasting their ignorance
when the lemmings are rushin the cliff edges..

Justin would do well to take a massage & lie low
take a little family & personal time..
Scheer is blowing himself out daily.. on typicall stupid talking points
NDP including Singh are lost in space..
Jason Kenney is one step ahead or behind Admirable Scheer
and does it really matter
Doug Ford is doing the Doug Ford huff n puff
Kathleen Wynne is lurking in the grass waiting to pounce

Business as usual on the political frontages
and same with mainstream media.. completely adrift

My impression is that Justin would give away a kingdom for a selfie. Furthermore, there is a big gap between what Canadians need and what Trudeau's corporate masters want.

Let me ask, are these trade deals important as Global Warming sweeps our way? I get the sense that international trade is being used as an exercise in distraction in order to avoid dealing with the important stuff.

These are strange times, sal. Politics these days is a play from the theatre of the absurd.

Global Warming is the clear and present danger, Toby. But we think that, if we close our eyes, it will go away.


Justin held his own with Trump, even if the Orange Bloat imagined that he had bested his Canadian friend. I would like to think that any Canadian prime minister, properly briefed, would have been able to handle Trump. He'd be in for a rough ride when he got back to Ottawa if he hadn't.

I understand Toby's angst. A lot of us share it.

I read something interesting about this "balance of trade" kerfuffle. Remember when Trump recently slapped a tariff on washing machines from China? Some of those products enter via the port of Vancouver before being trans-shipped to their US destination. However, even though these products never actually "land" in Canada, the US NAFTA negotiator adds them to his tally of Canadian exports to the United States.

If nothing else, it's been interesting to see how the Americans do math, Mound. And I suspect how they do it doesn't matter to Trump. He thinks he already knows the answer.