Competing On The World Stage 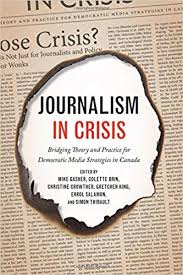 Canadian Journalism is in crisis. Michael Harris writes that a simple tax change could help stabalize the situation:

Canadian tax law has long provided incentives for companies to advertise in Canadian magazines, newspapers, and on television, but the tax code does not apply to digital media. If a Canadian corporation buys an ad in a foreign-owned newspaper or broadcast, it doesn’t get to count that as a business expense on its corporate taxes. This was to encourage Canadian newspapers and broadcast outlets to flourish against American competitors that benefit from enormous economies of scale. It was to ensure there was Canadian content created to protect our culture from being Disney-fied, and prevent us from becoming pale imitations of our information-spewing American cousins.


As things stand now, if Canadians buy advertising on Facebook or the Google platforms, they get a tax break:

Advertisements purchased on foreign web sites have always been — and remain today — fully tax deductible under the Income Tax Act. So Canadian companies now simply buy their ads on Google and Facebook — which take more than half the revenues and flood the marketplace — instead of sites owned by Canadian media companies. No one can compete with their audience size.


That doesn't solve the problem of the egregious lies that are posted on both platforms. One of the most egregious occurred a couple of weeks ago:

Emma Gonzalez, one of the leading voices of students demanding gun control in the United States, was recently photographed tearing up a rifle range target. But when her image was flashed across social media, it was the U.S. Constitution the student was ripping in two.

The gun nuts had their come-to-Jesus moment. These kids were not social activists in any positive way, they were subversives. It was all right there on the Internet. The real picture received less attention than the fake one.


There are some who would wonder why Canadians should get a tax break from an organization that is as effective as Dr. Goebbels' operation. The tax break wouldn't excuse the falsehoods. But if would help Canadian journalists compete on the world stage.

Image: amazon.ca
Posted by Owen Gray at 9:44 am

Email ThisBlogThis!Share to TwitterShare to FacebookShare to Pinterest
Labels: The Crisis in Canadian Journalism

The cynic in me says that our political leaders are, at best, ambivalent about real, hard hitting journalism, Owen. A quiescent and ignorant populace is far easier to manage than an informed one.

I'm loath to offer advertisers a tax incentive to place ads at the Rebel.

I'd take away the tax break on online advertising altogether. Online media that also publish dead tree editions will still benefit from a tax incentive by being able to bundle online with offline ads; online party propaganda outlets like the Rebel will not.

I suspect that sentiment is behind Donald Trump's claim that "loves the undereducated," Lorne.

That's an interesting suggestion, Cap. It would support both print and electronic journalism.


Both ideas, Harris' and Cap's, have obvious merits and this is the sort of thing that needs to be explored.

This close to an election, however, JT and Company aren't likely to be setting up any commissions of inquiry.

They are two worthy suggestions, Mound. But our politicians don't seem to feel a sense of urgency.

You can count clicks, you can't count eyeballs.