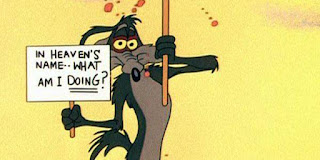 Apparently, Donald Trump and Kim Jong Un are going to talk to each other. The news should be viewed in the light of an opinion from a former C.I.A. analyst. David Ignatius writes in the Washington Post:

“Beep beep” was the subject line of an email message I received a few weeks ago from former CIA analyst Robert Carlin, as Kim Jong Un was accelerating his diplomatic charm offensive. “So typical,” wrote Carlin in his brief text. “The North Koreans as Road Runner, the U.S. as Wile E. Coyote.”


When it comes to foreign affairs, Ignatius believes that the United States has become a "cartoon villain:"

[Trump's] strategy, if you can call it that, has been to disrupt America’s traditional economic and security relationships and commitments. He must imagine that this gives him new leverage, but mostly the result has been a series of self-inflicted wounds.


Ignatius enumerates examples of that strategy:

Trade is the most obvious example of Trump’s clumsiness. While our economic competitors in China move to seize the commanding heights of technology, in artificial intelligence, quantum computing and robotics, Trump is trying to protect jobs in steel, coal and other industries that have been in decline for nearly 50 years. He seems determined to transform the United States into a lagging indicator, rather than a leading one.

Trump’s most untidy mess is the Middle East. He proclaims his willingness to walk away from the Iran nuclear deal. But strangely, he’s leaving the heavy lifting to European allies, which are drafting tougher provisions on Iranian ballistic missiles, on inspections of Iranian military sites and on the “sunset” of the agreement. Oh yes, they’re also lobbying Congress to support these moves.


And when it comes to the United States two greatest foes, Trump sits on his hands and cheers:

As for Russia and China, the United States’ two great power rivals, what strategy has Trump adopted? With Moscow, he has mostly sat on his hands; with Beijing, he’s been the biggest cheerleader for “president for life” Xi Jinping. He accompanies these weak policies with his usual tough talk.


If Trump's foreign policy is a Road Runner cartoon, the anvil will fall on his head.

The US is paranoid about being number one, and gaily talks of Russia and China as enemies, fuelled by the career paranoid artists at State and the CIA. "Enemies" in any logical use of the English language are opponents in actual war, but we have been brainwashed and forget the US has never formally declared war since the end of WW2. But has invaded 70 "enemy" countries anyway, in its attempts to "re-educate" the masses and make them ripe for corporate plucking. Decarie beats this point into heads over and over in his blog, and he was head of the history department at Concordia, not some dumb ex-CIA ghost writer toeing the bureaucratic line.?

I have zero time for the NYT and WaPo, beating the drums of orthodoxy into us. They are corporate foghorns for the status quo and maintenance of the military-industrial complex.

So Trump is actually going to talk to North Korea, and the best the careerists can come up with is a Road Runner analogy to belittle the effort? What a crock! I want to see hope, not war. The US is still going to hold "exercises" involving naval battle groups in the Sea of Japan to keep Kim in line. The constant parading of power is what made North Korea attempt to defend itself in the first place.

Same applies to Russia. The US rings the place with hundreds of military bases, and then apparently wonders why there are objections and reactions. The illogic in the US is astoundingly baffling, and always geared to the notion that everybody should always toe the US line. Look at us - we have 400 wet behind the ears troops patrolling the Latvia/Russia border so as to stem the paranoid fears that hundreds of thousands of pillaging Cossacks will soon be pouring over the border.

Frankly, it's utter BS from beginning to end. Back anyone into a corner, tell 'em it's your way or the highway, and what would you expect? Reaction. The US was too dumb to win over people with honey, it would rather bomb them instead. Well, I'm fed up with that PNAC exceptional line of thought myself. I don't want to continously bow to US hegemony. But JT caves in every single time and twice on Sunday.

It's like praising Mueller as if he were some kind of saint or something, when all I see is the establishment farting around trying to protect its own. All we have so far is that the business crooks Trump knows were cooking up dubious deals with crooked Russians. The various "reports" are childish BS, Steele was a UK plant to bolster the BS, and not a soul can prove Russia really made any dent in the US election results. But the US interferes all the time overseas, and nobody raises a peep. Whitlam was deposed as Oz PM, not a peep. Read some Pilger. In fact read some Dissident Voice, and Info Clearing House to get more than the one- sided crap the US "press" issues forth.

Doesn't mean I praise Trump. He's mainly a complete right wing idiot. But if in that minor brain of his, he occasionally comes up with an idea for possible peace, well I'm all for it.

Watch the establishment try to scuttle this move - it doesn't suit their agenda for raping the world.

Much of what you say about U.S. foreign policy -- particularly since World War II -- is true, BM. Genuine talks between the United States and North Korea represent a real opportunity. The problem, on one side at least, is the man who will be representing the United States. We've seen his deal making skills at work now for over a year. He says something, then backs away. His main talent is for trading insults. As Ignatius says, he comes off as a cartoon villain.