A Rare And Endangered Spieces 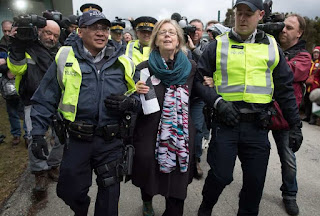 Elizabeth May talks the talk and walks the walk. Over the weekend, she was arrested in Burnaby. Michael Harris writes:

The Green Party leader was protesting Kinder Morgan’s Trans Mountain pipeline expansion when she and Kennedy Stewart, the NDP MP for Burnaby South, were arrested at the gate of one of the company’s work sites Friday. So far, 100 protesters have been charged along with them, including the co-founder of Greenpeace.

The charge that the two politicians face is civil contempt for blockading a road. It’s not a criminal charge and the politicians are free to continue their protest of the pipeline project.

The boo-birds who have attacked May for her “illegal” protest, also like to paint her as zealot-in-chief of the anti-development, tree-hugging set. It is true May loves trees. She proved that 40 years ago as a 20-something protester in her epic fight against Big Pulp and Paper during Nova Scotia’s bitter spruce budworm wars.


But May is no wild eyed radical. She does not want to shut the Tar Sands down:

The Green Party leader does not argue that the tar sands should be shut down. In fact, she endorses the position taken by Unifor, the major union for tar sands workers, that Kinder Morgan’s pipeline expansion is a job and profit-sucker, as well as a threat to the environment.

Instead of sending diluted bitumen south, where the U.S. makes all the value-added profit, May says that solid bitumen should be processed or refined in Alberta for the Canadian market.


However, the Darwinian capitalism of this century decrees that society absorbs long term costs and companies reap short term profits. May is swimming against the stream. But, Harris writes, history shows that those who swim against the stream often change their societies for the better:

From Magna Carta to Martin Luther, from the Boston Tea Party to the French Revolution, individual rights and freedoms have advanced on the shoulders of a few souls brave enough to stand up to arbitrary measures that reduced their fellows to serfdom. And yes, they sometimes broke the law to do it. Elizabeth May, Canada’s Joan of Arc of the environment, is in that tradition.


May is the kind of politician who is not only rare. She is also an endangered species.

She is indeed an endangered species Owen. With a long and principled stand for both our environment and our democratic principals I fear that she and her party are getting tired of beating their head against the wall of corporate funded BS embraced by so many of our other 'representatives'. I have long wondered how come it is more feasible to ship diluted tar sands overseas (and the danger to our coastal waters) than process it locally into a directly usable (and more valuable) product.

It's all about the cost of processing the stuff, Rural. Because it's dirty oil, it's very expensive to process. If the folks who dig it up can pawn off the costs on somebody else, the bigger the profit.


In any country, oil is a strategic national resource. Those nations that have none would readily confirm that. Yet our focus, like that of other producing countries, has been to strip ourselves of as much of that strategic resource as rapidly as possible. Bitumen, once refined, is a potential source of most petro-chemicals including plastics. It can also be used in the production of asphalt or, as First Nations have done for centuries, to waterproof your birch bark canoe.

Despite Peter Lougheed's "go slow" warnings, Alberta has repeatedly demonstrated the devastating effects massive production of bitumen can have by overheating the provincial economy into a ruinous bubble only to see it burst. So much notional wealth has been shipped out of Alberta and yet the province remains mired in debt. And that, kids, is why we cannot have nice things.

It's a return to the 19th Century, Mound. We were content then to be hewers of wood and drawers of water. The colonial mindset lives on.

.. the full story of 'dilbit' is a long & convoluted tale
and full disclosure, I directed/produced one of the early IPO videos
to help launch the tar sands funding..

I also worked prior.. as a landscaper near Swan Hills Alberta
to carve the properties & sod the properties
for Big Energy dilbit executives out of the sticky clay up there

Was busted for poaching trout on Victoria Day weekend up there,
the Nat Resources office refused to open.. to pay for permits
It was a nice 2 + pound Rainbow or Splake as I recall
but coming around the curve of shoreline
shouting 'I caught one' did nothing to assist my defense
and the unfortunate fish was in the Edmonton courtroom a month later
as was I.. fortunately a sweet little American girl had been caught same day
Her spincaster line n worm in the water north of Lake Louise & no permit
So we both got spanked with a small fine

My case followed hers... wondrous
Tho my fly rod n reel is now used by the judge
of that I have no doubt.. it was an astonishing cane rod
with a truly fine, early aluminum reel.. and brass guides.. I wept

My grandfather rolled over in his grave
he would have preferred I hurled it into the lake
and leapt in immediately after with a 10 HP Evinrude
or boat anchor tied to my leg for being so careless with one his fly rods
(he could be very blunt.. he was a hard man)

I did digress & apologies.. I have harsh views re dilbit
Will gather my thoughts n stay on topic

I just wanted to color in why I may get unduly perturbed
at what is happening in Alberta, the resource stripping
as some think a Toronto 'easterner' like me should shut up..
Hell, I was running bulldozers n backhoes up there mid to late 70's
and was rolling combines across the prairies
when the weather was fine, and the harvest to be done

I am convinced that there are powerful people who want Canadians to always be hewers of wood and drawers of water. Every action that Canada takes to add value seems to eventually be bought up or put out of business in some way. Alberta could have had a very long value added economy using oil and tar sands to kick start the process. It could have done so but the various powers that be did whatever it took to prevent that.

I suspect that if Alberta had truly tried to use Lougheed's prescription that the Marines would have been up here to save us.

The dilbit juggernaut has not made the world safe for rainbow trout or West Coast salmon. sal.

Lougheed -- with his Harvard MBA -- knew what he was about, Toby. The people who followed him -- like Ralph Klein -- were clueless.