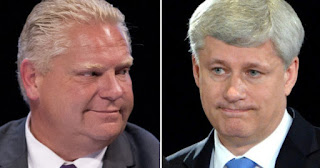 For those of us who worry that Doug Ford is Donald of the North, Tom Walkom has a calming message:

If he and his party win the June provincial election, it will be for homegrown reasons.


Walkom believes there is a common thread that winds through Ontario politics:

Ontario is usually a Red Tory province. Voters tend to elect parties, whether they call themselves PC, Liberal or New Democrat, that promise the Red Tory formula of fiscal rectitude and moderately progressive social policy.

But every now and again, when they believe matters have swung too much to one side or the other, Ontarians elect a more radical government — one that promises to purge the system and restore balance.


Ford could be another Mike Harris or Bob Rae:

If Ford does become premier on the promise of delivering fundamental change, he will be following in the footsteps of Bob Rae and Mike Harris.

Rae’s NDP was elected in 1990 by an electorate that had grown weary of then-premier David Peterson’s governing Liberals but was not prepared to vote in the Tories.

The voters were not necessarily opposed to Liberal policies. But they did chafe at the governing party’s unbridled sense of entitlement.

In the next election, in 1995, Harris’ PCs were elected with a sweeping mandate to restructure a public sector that the voters thought was badly out of kilter.

The Harris years were marked by both radical change and conflict. In 2003, the voters decided it was time for a rest and returned the Liberals to power.


And Ford is not a white nationalist:

Unlike Trump, Ford has not fanned the embers of white nationalism and nativism. Indeed, his Ford Nation backers are marked by their racial and ethnic diversity.

Unlike Trump, Ford levels no complaints against immigrants. Quite the reverse.


Susan Delacourt writes that Ford has more in common with Stephen Harper than Donald Trump.

Just a brief word on Stephen Hawking. He was a man who faced seemingly insurmountable barriers and accomplished so much. He represented what is best in all of us.

Image: Huffington Post
Posted by Owen Gray at 9:18 am

And so it begins, the media normalization of DoFo. He's not so bad, he could be the next Mike Harris. As if Mike Harris wasn't the most destructive government in Ontario history and the breeding ground of countless horrible ministers under Harper.

No, DoFo is a thug. He has neither Harper's discipline nor his understanding of the political system. In that sense, he is more like Trump.

While DoFo may have some support among immigrants according to media reports, I question how much. His desire to roll back the sex-ed curriculum 40 years is going to appeal to religious fundamentalists of all stripes, including some Muslim immigrants. I don't see him having broad appeal to minorities in general. Meanwhile, as the US experience shows, there is broad overlap between evangelicals and white nationalists. When you go courting McVety's group, you're sending all the right signals to racists too.

lWe are all the poorer with Hawking's passing, Owen. Buddha-like, he seemed to be an eternal presence.

Regarding Ford, I note Walkom, while talking about the negative attributes that he lacks, really doesn't identify anything positive about him. I think we both know why.

I think Cap hits the nail on the head, Lorne. Essentially, Doug -- like his brother Rob -- is a thug. Everyone seems to forget the Globe and Mail article which claimed that, in his youth, Doug did a brisk business selling various drugs.

As for Hawking, he was a gift.

Owen, yesterday I was listening to the CBC interview someone on how DoFo favours the privatization of marijuana sales. I remembered that G&M article and laughed. Not once did the interviewer bring up DoFo's own past experience with privatized drug sales!

As I said, the media normalization had begun. If they can make a golf pro like Harris seem like a respectable leader, they can do the same for a thug like DoFo.

A blast from the past, Mound.

You're right, Cap. When these guys show up, there's always a chorus to claim they're just regular folks.

Harris also claimed to be a former techer, Cap. He lasted three years in the job.