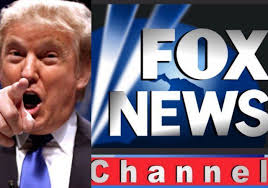 Robert Reich writes that Donald Trump is preparing for war. The war will be a war over his presidency -- and possibly a hot war to boot:

Trump is preparing for an epic war over the future of his presidency. This has required purging naysayers from his Cabinet and White House staff, and replacing them with bomb-throwing advocates like Bolton and Kudlow

Fox News is preparing for the same war, and has made a parallel purge – removing Trump critics like George Will, Megyn Kelly, and Rich Lowry, and installing Trump marketers like Laura Ingraham, Mark Levin, and Sebastian Gorka.


In this war, Fox News will serve as the state propaganda machine:

The membrane separating Trump’s brain from Fox News has always been thin, but in coming months it’s likely to disappear entirely.

We all know Trump watches an inordinate amount of Fox News, beginning in the wee hours with “Fox and Friends,” which provides much of the fodder for his morning tweets.

Trump has made John Bolton his National Security Advisor not because Bolton has valuable insights about foreign affairs, but because Bolton – for years, an on-air fixture on Fox News – is a showman who knows how to sell big lies and crazy ideas, and thereby help Trump in the looming battles.

As undersecretary of state for arms control in the Bush administration Bolton did more than anyone else to market the lie that Saddam Hussein had weapons of mass destruction. During his year and a half at the United Nations, Bolton was so outspokenly critical of the organization that he gained the devotion of xenophobic conservatives.


And the war will be an all out war -- a war in which there are no safe havens:

When the occupant of the White House and the sycophants surrounding him are prepared to do and use anything – including trade wars with China and possibly hot wars with North Korea and Iran – to win a political war at home, nothing and no one is safe.

Email ThisBlogThis!Share to TwitterShare to FacebookShare to Pinterest
Labels: The Fox News Presidency


I suppose he's right. Something has to give. Trump is in the ditch and can't climb out on his own. He needs something seriously chaotic. His greatest advantage is an utterly cowed Republican congressional caucus. As long as he can keep them whipped and fearful there's a lot of excess he can safely exploit. It's said that his remaining generals, Mattis and Kelly, are seriously at odds with Trump's hawks - Pompeo, Bolton and the torturing troll he has installed at the CIA. Bolton doesn't need Senate confirmation but he does need a security clearance so he's not out of the woods just yet. What a mess.

During the debates, Jeb Bush called Trump the "chaos candidate," Mound, and he predicted that Trump would be the "chaos president." His prediction was spot on.


Jeb was right on the money with that one, Owen.

Perhaps that's why Trump had such contempt for him, Mound.