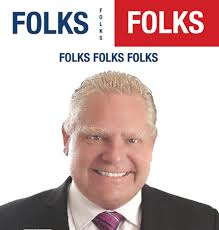 The latest poll suggests that Doug Ford will be the next premier of Ontario. Alan Freeman hopes the poll has it wrong:

The new Ontario Progressive Conservative leader and would-be premier of our largest and most powerful province, gave an interview this week to CBC Radio in Ottawa. It was frightening, not so much because of his lack of ideas or his ideological bent but his ignorance of what’s actually going on in Ontario, his lack of any policy knowledge or basic facts.

What he did demonstrate, like Donald Trump, was an ability to repeat slogans that appeal to people who feel they’re being over-taxed, over-regulated and generally abused by elites, in this case the Liberal government of Kathleen Wynne.


Like Trump, Ford is a fraud. He poses as a regular guy. He's not:

First off, it’s important to remember that Doug Ford is not everyman. He’s a wealthy businessman whose father was a Conservative politician and legislator. Yet Ford wears his apparent cluelessness like a badge of honour.


The ordinary guy is not clueless. He may be angry. He may feel that his options are limited. It's true that some of his friends are clueless. Problems arise however, when we elect clueless people. Ford says that Ontario is "a disaster." His conclusion betrays his ignorance:

Now, it’s true that hydro rates in Ontario are too high but they’re not the highest in North America. According to an annual survey by Hydro-Quebec, average rates for residential customers in Toronto in 2017 were 16.3 cents per kilowatt hour, more than double the cost in Montreal but a lot lower than the 29.67 per kilowatt paid by residents of New York City. Likewise, large-power customers paid a lot more in Ontario than Quebec but less than in Boston.

And Ontario is hardly an economic disaster. There are plenty jobs around. In fact, Ontario’s jobless rate in February was 5.5 per cent and economic growth in 2017 was an impressive 2.7 per cent.

Last year’s average unemployment rate in Ontario was the lowest since 1989 and TD Bank recently reported that one of the province’s major economic challenges is the scarcity of labour. And what does Doug Ford promise? “We’re going to start creating jobs,” he said. To be filled by whom? Does he have any clue about the true state of the province’s economy?

In fact, many of the economic problems facing the province result from that economic dynamism, growth that has been too concentrated in the Toronto region, leading to housing costs that are out of the range of middle-income families and congestion that risks strangling the economic engine of the province.

Ignorance will solve none of these problems.


And that's precisely the point. And, because Ford would bring preening ignorance to the premier's office, he's not the man for the job.

Image: torontostandard.com
Posted by Owen Gray at 9:48 am


As it was explained to me, the third brother, who runs the family business out of Chicago, is the son who got the brains. The labeling company was created by the father and greatly expanded by Doug's surviving brother. Apparently the whole family feeds off it.

That's my understanding, too, Mound. Doug appears to believe that money has made him wise. Obviously, he has been misinformed.

The Star had some good letters on the topic of Doug Ford today, Owen. The lead letter is especially good in trying to bring some critical thought tohis bluster: https://www.thestar.com/opinion/letters_to_the_editors/2018/03/17/your-letters-is-ontario-ready-to-join-ford-nation.html

After watching so-called "little people" of all races and income being interviewed on the streets in Ontario (which means the GTA on Global TV budgets), it's worrying to see simple nice folk say they'll vote for Ford. Doug's for the little guy, you see. They're convinced of it. Wynne and the educated top-down policy makers are simply too remote for these people. NDP no longer resonates - at all. People want apparent down-to-earth localized government that seems to listen to them. Nobody knows their civics or could care less about workings of government. Doug speaks to these folk, like it or not. His understanding is no more complex than theirs.

Can't beat that groundswell. Ontario is forked. The intellectual dross will take over so you might as well prepare for it. King Doug will dispense promises and shekels, you see. And remember everyone's name too. As second most powerful elected pol in Canada, he'll likely tell Justin off in no uncertain terms, and Jason will rejoice even as Notley goes Tony Blair rightwing and still loses next year.

That's when we progressives will finally realize people don't care about philisophy. They want someone to rule them and dispense favours. It's nice and predictable and understandable. And, I fatalistically expect, a winning formula in Ontario at this time.

The Campaign Research poll was an online poll. They have been shown to be unreliable time after time.

The first letter hits the nail on the head, Lorne:

As a wealthy business owner, is Ford not an elite whose pro-business and anti-tax policies meet his needs and not necessarily those of the little guy?

We can’t go back to the 20th century. Times have changed and continue to change rapidly. We desperately need a truly progressive government.

I hope you're wrong, BM. But I fear you're right.

A good point, UU4077. Yesterday, the NDP offered phramacare and free tuition. We'll see if those promises move the numbers.