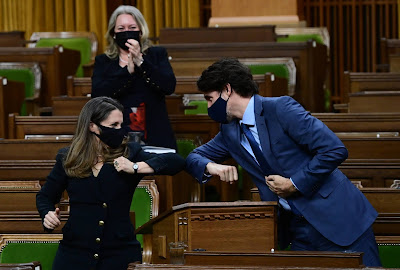 Chrystia Freeland's budget has something for everybody. Michael Harris goes into the details:

The star of this 739-page budget? The federal government will also spend $30 billion over the next five years on a national child-care program. That is something that the Liberals have been promising since 1993, when it was a key plank in their campaign platform document, the Red Book.

This marks the second time a Liberal government has introduced a national child-care program. The first one was created by former prime minister Paul Martin. That short-lived program was barely up and running when incoming prime minister Stephen Harper cancelled it. Harper replaced the national plan with a $100-per-child payment made directly to parents.

The finance minister also announced a new hiring credit for employers, which can be used to hire new staff or raise the wages of existing employees. The federal government will cover as much as $1,100 of a worker’s pay every four weeks.

Addressing the crisis in affordable housing, the budget included a new tax on absentee foreign property owners speculating in the Canadian housing market. Faced with an over-heated real estate market, Ottawa will also invest in incentives for first time homebuyers, and generous tax credits to homeowners to make their homes more energy efficient. A total of $4.5 billion will go into that program in the form of $40,000, interest-free loans to participants.

Canada’s minimum wage was raised to $15 an hour.

The provinces got a $7 billion top-up in health-care transfers.

Pensioners get a $500 cheque this summer, and a ten per cent increase annually starting in July 2022.

There is $57 million for farmers who had to pay to quarantine offshore workers coming into the country.

Employment insurance sickness benefits have been extended from 15 to 26 weeks.

The doubling of Canada Student Grants has been extended for two years, and there are also interest payment breaks for students with outstanding loans.

She has tweaked a few taxes:

Other new measures include a sales tax for online platforms and e-commerce warehouses, and a digital services tax on big web companies.

But the budget focuses on spending, not taxes. It will drive deficit hawks crazy. Will it survive? Harris believes that, in the end, the NDP will support it.

Inequality needs to be addressed from both ends - support for low incomes funded by tax on high incomes. Without the tax on high incomes, the money spent on the bottom end winds up in the hands of those at the top. A minor tax on luxury items ain't gonna cut it.

The NDP is advocating for a wealth tax, Cap. Perhaps that will the price for their support.

In the age of the Internet many old methods of taxing don't work fairly. It is simply too easy to shuffle digital wealth across borders. People cheat and the rich have every incentive to do so.

Where is the big money? In finance. When we were young (at least when I was young) finance was a savings account and a check book. Investment was Canada savings bonds and utility stocks. Nobody had a financial advisor. Even Henry Ford had a couple of bookkeepers counting his millions - no financial wizards - well into the postwar years. Today finance is the goose that lays the golden eggs.

Thanks for the link, Toby. I agree. We no longer make things. We move money around.

OAS gets a great big 42.00 a month with a 10% increase. That is definitely not a15.00 an hour living wage as it now is being called once again a“minimum wage”. Most retired people in this country do not make $77,000 dollars a year nor did they have the opportunity to save for that kind of retirement. Most of these Canadians happen to be women. What a slap to provide $500.00, a one time payment which does not pay for a filling in the Dentist’s office. Where do these politicians think they come from...from under a cabbage patch??? Yes inequality is big time in this country and retired people don’t deserve a quality life after 65 except for people like Mrs Trudeau Sr. The way many retired are treated in this country is down right shameful. For example, a person in her 70’s, who has ulcerative colitis who is able to treat herself to a gluten free ice cream once a month, can no longer do so. It has increased in price from $4.69 last February to $8.99 now. Food has increased 100% since last March. This is a pitiful. Anyong

There's something for everybody, Anyong. But things are still unequal.

There's something for everybody,

Should we swallow that bait we would have to accept that the 'status quo' is a metric to achieve.
Consider this!
https://theintercept.com/2021/04/23/deconstructed-whistleblower-financial-crisis/

To be honest, all bets are off but the odds are on the monopolies and cartels.

Those who refuse to learn from history, TB, are doomed to repeat it.

Owen, your comment to Toby is bang on - except that you forgot to add when you said "we move money around" I would have added that "and it only goes one way".

They call it "Trickle Up Economics," Lulymay.