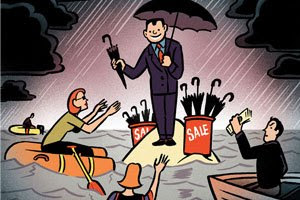 Linda McQuaig looks back forty years, to when biotech was part of the Canadian landscape:

It's hard to believe it has come to this. Forty years ago, when a biotech industry was just a gleam in Fidel Castro's eye, Canada had already made it to the top.

We already had one of the world's leading biotech firms -- Connaught Labs, a publicly owned enterprise that had developed and produced its own vaccines for seven decades, and whose research scientists were considered among the best in the world.

Cuba, on the other hand, had only a modest lab with six technicians. But Castro had a dream -- creating an innovative biotech industry to produce vaccines for Cubans and others in developing countries often ignored by big pharma.

Then came Brian Mulroney. And he had an agenda:

Brian Mulroney had a different dream -- privatizing Canada's public enterprises in line with requests from the business community. So, in the 1980s, the Mulroney government sold Connaught Labs, then one of the world's most innovative vaccine developers.

He sold out the resources we need now. And we're in a spot. To solve our problem, Justin Trudeau is forming a public-private marriage. The old Connought plant -- now owned by Sanofi-Pasteur -- will produce vaccines for Canada and other countries.

That is not a solution. On the contrary, it's a reckless use of a lot of public money.

Ottawa is in ongoing negotiations with Sanofi over a contract aimed at giving Canadians priority access to vaccines produced at the Connaught plant during a future pandemic, federal industry minister Francois-Philippe Champagne said last week.

But surely it would have been better to postpone announcing the $415 million until after Sanofi had agreed to the government's terms about priority access for Canadians.

Without that nailed down, we can just keep our fingers crossed that Sanofi will come through for us in the future.

The situation reveals how much Canada is at the mercy of the powerful drug industry now that we no longer have a domestic vaccine capacity that we control.

Indeed, Sanofi might use its negotiations with Ottawa to push hard on another issue that's important to Sanofi and other big pharma companies.

In December 2017, big pharma was outraged when the Trudeau government announced changes to the Patented Medicines Regulations aimed at reducing patented drug prices by billions of dollars.

Big pharma has retaliated by not submitting 39 drugs, including treatments for cancer and Parkinson's, to Health Canada for approval, citing uncertainty over the proposed changes.

It's a textbook case of how Disaster Capitalism works.

Email ThisBlogThis!Share to TwitterShare to FacebookShare to Pinterest
Labels: Trudeau's Deal With Sanofi-Pasteur

I am sure that many people don't even know about Connaught Labs, Owen, so I always enjoy the fact that Linda McQuaig offers a lens on the things we had and lost, and the things that yet could still be achieved, if we just had the political will. Unfortunately, neither the Liberal government nor the Conservative Party has any interest in turning back the pharmaceutical clock.

We are better than this, Lorne. unfortunately, we have forgotten what we had achieved.

This is but one example of the tattered state of resilience in globalized Canada. There are some things, some assets that offer a unique, irreplaceable service far in excess of their free market value. The neoliberal era, that continues under today's Liberals, blinded us to that.

When I was in the military it was stressed that modern warfare was very much a "come as you are" party. You went to war with what you had, not with what you wanted or what the pols might want after the horse had left the barn. In other words, commercial considerations were not determinative as they might be in the realm of the public service.

Resilience is preparedness and that comes at a cost that may be considered unjustifiable, wasteful until the very moment you cannot survive without it. But the High Priests of neoliberalism that we install in our highest offices substitute balance sheets for vision. That is manifest in Trudeau's love affair with P3 projects.

Yes we need another Connaught Labs. Yes, it will be costly. Yes, it won't pay its way. Joe Biden is now trying to clean up his country's problems with these public-private ventures. The private sector partners have had a nasty habit of using public financing but treating their research and discoveries as their exclusive property. Can we trust this prime minister won't let that happen here? No.

The prime directive has been clear for some time, Mound. Neoliberals believe in privatizing profits and socializing losses. We the people pay the tab.

Canada's conservative premiers have created the disaster conditions for vaccine-makers to hold our collective feet to the fire. Had the premiers collaborated and implemented the Atlantic Bubble strategies, our need for vaccines would be less pressing and our negotiating position improved.

So what does Big Pharma want? A former Sanofi Pasteur executive spelled it out this week in The Atlantic: patents, prices, and procurement. As McQuaig points out, the drug-makers want longer patent protection, which is simply rent-seeking. It has little to do with funding research, as most drug-makers spend more on advertising than they do on R&D. What R&D they do is largely geared at tweaking existing drug formulas to extend patent protections.

Next are prices and procurement. The US with its private health insurers pays the world's highest drug prices. Big Pharma wants Canada to do the same by giving up what they call our “virtually monopsonistic” procurement system that leads to us paying considerably less. Again, more rent-seeking.

Finally, they want public-private research partnerships in exchange for more domestic production. As always, PPPs see the public taking on the risk of financial loss while the private sector takes the gains.

Canada would be foolish to agree to this wish-list. It would simply lead to higher drug prices with absolutely no guarantee of increased Canadian R&D or production. Sadly, without Connaught to keep Big Pharma honest, I suspect the political conditions for capitulation are already there.

Do we have to wait for absolute proof that the CIB is a fraud before we try to find some new ruling families?

We used to believe in a "mixed economy," Cap. We believed that there really was a place for both private and public enterprise. We are now paying dearly for abandoning what was very good policy.

We allowed The great M to abandon our Connaught without knowing what we were losing all in the name of greed. The working people of this country are not worth anything. Anyong

For decades now, our politicians have catered to the preferences of the rich, Anyong. COVID recognizes no such preferences.

APoliticans do not give one whoot for the working people of this country. Anyong

They do when they're desperate for votes, Anyong.

For decades now, our politicians have catered to the preferences of the rich, Anyong. COVID recognises no such preferences.

Covid 'should' have been the great equaliser but it only put more money in the hands of those that are not only rich but are above governance.

That is exactly what has happened, TB.

I didn’t explain myself very clearly I see. 8:10 your comment is what I was trying to say. Anyong

It's interesting to see people come to the same conclusions, Anyong.