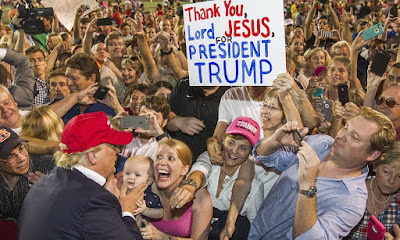 David Brooks writes that, among Republicans, Trumpism is metastasizing:

There are increasing signs that the Trumpian base is radicalizing. My Republican friends report vicious divisions in their churches and families. Republican politicians who don’t toe the Trump line are speaking of death threats and menacing verbal attacks.

What’s happening can only be called a venomous panic attack. Since the election, large swathes of the Trumpian right have decided America is facing a crisis like never before and they are the small army of warriors fighting with Alamo-level desperation to ensure the survival of the country as they conceive it.

Polling data underscores how virulent the virus has become:

The first important survey data to understand this moment is the one pollster Kristen Soltis Anderson discussed with my colleague Ezra Klein. When asked in late January if politics is more about “enacting good public policy” or “ensuring the survival of the country as we know it,” 51 percent of Trump Republicans said survival; only 19 percent said policy.

The level of Republican pessimism is off the charts. A February Economist-YouGov poll asked Americans which statement is closest to their view: “It’s a big, beautiful world, mostly full of good people, and we must find a way to embrace each other and not allow ourselves to become isolated” or “Our lives are threatened by terrorists, criminals and illegal immigrants, and our priority should be to protect ourselves.”

This level of catastrophism, nearly despair, has fed into an amped-up warrior mentality.

“The decent know that they must become ruthless. They must become the stuff of nightmares,” Jack Kerwick writes in the Trumpian magazine American Greatness. “The good man must spare not a moment to train, in both body and mind, to become the monster that he may need to become in order to slay the monsters that prey upon the vulnerable.”

Trump may be gone. But the virus he hosted has mutated and is spreading like wildfire.

Mr Brooks makes a comfortable living pretending that the GOP is not the irredeemable far-right/fascist party it is. Lately, that's taken the form of referring to "Trump Republicans" as though there were some other kind. Trumpists like Hawley, Taylor Greene, Jordan, Cruz and Gaetz are at the core of the GOP, while people like Cheney and Romney may be toward the fringes. But all of them vote with the party at least 95% of the time indicating broad agreement with party principles (or lack thereof).

Anyone not on board has left the party. Unlike his peers Jennifer Rubin, Max Boot and David Frum, David Brooks has not left the GOP. I draw the obvious conclusion and treat his opinions accordingly.

The Night of the Long Knives, redux?

I get the sense that America is taking some wild corner way too fast. At some point they could lose traction or run out of road, careening into the verge.

These sentiments are more than disturbing. They're alarming. What does it take for once relatively sensible people to come unhinged? Was the storming of the Capitol just a dress rehearsal for something much greater looming not too far beneath the surface of America?

As you know, Owen, Chris Hedges has long proclaimed America to have entered a "pre-revolutionary state." When he first penned that phrase, the United States was positively docile compared to where it is today.

The survey questions show the Trump Gullibillies see the survival of their country, white America, in peril from non-whites, i.e. terrorists, criminals, and illegals. They crave the survival of America "as they know it." Ozzie and Harriet America, white America, as they know it. Ammon Bundy has rallied his gang of free range grazers. How long before these people turn Timothy McVeigh into their Horst Wessel?

I would like to think that these slobs are too attached to fast food and too-lite beer to really represent a cohesive threat but I still wonder if this could turn into some sort of very loosely organized and widely dispersed insurgency.

All I know for sure is that I never thought Amerika could get to this point.

Brooks hangs in, Cap, hoping the Republican Party will come to its senses. Others concluded long ago that the party sold its soul and is, therefore, beyond redemption.

Nor did I, Mound. I underestimated the power of our darker angels.

10:57 Does it not occur to you this is very closely related to what happened in Germany in 1930-1933. Americans of German ancestry and the religious right, have not given up on Nazi ideals it seems. Trumpf acts like a Nazi and shows he is a wanna be Hitler????Anyong

I'm not sure that Trump has any particular pull with people of German ancestry, Anyong. But I do know he prefers supporters who don't know how to think critically.

The photo says it all.
We love you Jaysus and the Donald!
Supporting and believing in the unseen, unchallenged, factually unsupported is a recipe for failure.
That a 2000 year old hippy commands so much obedience proves the willing ignorance of modern man.
That modern man still looks for disciples of that hippy and manipulate his supposed words for profit and control adds to the stupidity of the moment.
The wilful belief and obedience of millions in the supernatural in 2021 is nothing more than the belief in witches and ghosts.