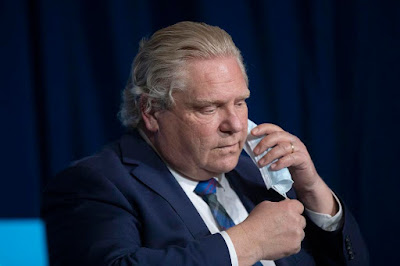 This week Doug Ford said he was sorry. And he cried. Bruce Arthur writes:

The premier is in self-isolation after exposure to a positive COVID case, and broke down talking about not being able to hold a parent’s hand as they die, and maybe that was part of the emotion. Maybe it really was the accumulated weight, but then, we are all carrying accumulated weight. Talk to an ICU nurse sometime. Mostly, Doug Ford didn’t look like he was up to the job.

The apology and the tears were good theatre; but they were a distraction:

There is a better way to do this, and instead the government decided on policies so absurd they enraged the entire political spectrum, with plummeting polls to match. Which, if we’re being honest, was probably the biggest reason Doug said sorry.

Ford also said the buck stopped with him, before blaming the federal government for everything. The strangeness, the breakdown, the setting — it was all reminiscent of the Rob Ford era, and it was striking.

It was all a show to avoid what is the whole point:

The point is that so much damage has been done, and will be done, and what matters now is what this government does. There are already 800 COVID-19 patients in Ontario ICUs, and the patient transport system is the only reason several hospitals haven’t been overwhelmed. The ICU number isn’t even the true number, because there are so many patients who would ordinarily be in the ICU, but are being given supplemental oxygen on the wards. Elective surgeries are gone. Triage is underway.

The point is that this government owns the third wave, lock, stock and coffins. They were told what would happen; they opened Ontario up anyway, waited until three weeks ago to do anything, waited another week before doing a little more, and left the vulnerable root causes untouched.

They could have controlled it. They chose not to. Ford cried the same day one of his MPPs, Jane McKenna of Burlington, spoke in the legislature of COVID-19 Chicken Littles. That’s probably the kind of person the premier was speaking of when he mentioned the people who thought a stay-at-home order should not have happened at all.

The point is that if Ontario manages to avoid the worst-case modelling presented by the science table it will be because so many people did so much to save us from a provincial government that still didn’t understand the playgrounds shouldn’t close. The case curve finally appears to be flattening; it’s now possible Ontario could hold this to 1,000 in the ICU. But ICU numbers will take some time to fall. Emptying the ICUs, even if cases drop and continue to drop, will take months.

So what the government does matters, Real, easy paid sick leave for workers who need it; Ford is already signalling he won’t impose costs on business owners, though. Close more nonessential businesses; that still hasn’t happened. Pour vaccines into hot spots; that may be on the list. Hot spots in Toronto and Peel are slated to get 25 per cent of Pfizer now; the science table asked for 50 per cent. When the science table laid out its recommendations in that letter earlier this week, it dawned on me that it was the first time Ontario had ever seen a strategy that wasn’t just to react, to protect donors, and to hope the hospitals didn’t tip.

Reaction defines Doug Ford. Proactive behaviour is not his thing.

The hospitals are so swamped that Ford is now moving non-urgent Covid cases into nursing homes. The thinking appears to be that residents there have already been vaccinated, so it's a good opportunity for extra private-sector profit.

Meanwhile, in Kentucky, an unvaccinated healthcare worker set off a COVID-19 outbreak at a nursing home where the vast majority of residents had been vaccinated, leading to dozens of infections.

This is a reminder that even vaccinated people should continue wearing masks, regardless of what your Con rage-uncle posts on FB.

Ford is panicked and he's scrambling, Cap. We should not trust his ability to make good decisions -- period.

Are we becoming inured to incompetence and failure? Look how many Americans turned out to vote for Donald Trump despite his lethal bungling of the corona virus pandemic. Will Doug Ford, despite the current slump in the polls, also rebound?

Bruce Arthur's column reads like a cheap novel and yet it's true. We're witnessing how inflexible rightwing ideology can be, how it blinds its practitioners and leaves them sluggish and unresponsive whether they be premiers such as Ford, Kenney or Moe or heads of state such as Bolsonaro, Modi and Trump. There's a defect of intellect built into today's mutation of conservatism.

Edmund Burke must be spinning in his grave, Mound. Modern conservatives have made the term a synonym for stupid.

The buck stops with me too. I don't ever point any fingers until after I get my paycheque.

Antifa did it. Wait a minute. This one looks like we could pin it on the Socialists. It ain't a stretch when we've got such an appropriately enlightened audience.

Just between us, I have tell you that it's your fault too. Incompetence has always been my default. You should have known that when you hired me. I'm a pure product of the libertarian meritocracy. Neither Burke nor Locke could ever have predicted me. But you've got no excuse; if you'd have put down your News Of The World for a minute you'd have seen me coming.

We have friends that live in Toronto in an apartment. He was a scientist at Chalk River that was part of the team that developed some special nuclear thing that our government of the day gave away without any compensation.

But, I digress. He is now 89 and in a stage of advanced AZ disease and must be moved from bed to wheelchair and reverse. His wife is his sole caregiver. Why? because given the situation in care homes, she is scared he will probably get this Covid and/or future iterations that are quickly arriving on our shores. She does not have help come in because, you know - COVID issues.

This poor lady is not alone in her situation -- and we cannot even guess how many are because, you know, COVID and its recommended restrictions and who actually thinks it applies to them. This is a terrible time to be a senior - especially in certain provinces.

The other half in our house has a compromised immune system and since we arrived back home on March 1, 2020 we have scrupulously followed all the guidelines.

There are all kinds of people whose health is already compromised, Lulymay. And Mr. Ford's carelessness has put a target on their backs.