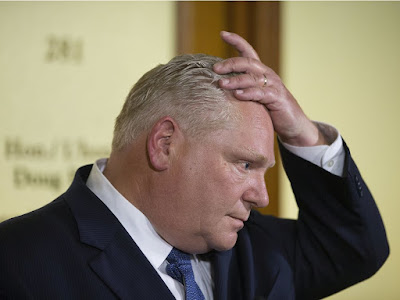 Yesterday, Ontario's education minister announced that all schools in the province are returning to online learning. Bruce Arthur writes:

The schools … well, it’s really something when the province insists schools are safe, refuses to properly test, keeps kids home after Christmas, moves March break, calls on the federal government to somehow procure vaccines for children, won’t cancel classes before April break, insists schools will reopen after April break, and then shuts schools the next day. So we get the blunt-force application of closures across the province, because there is simply too much virus in the community. Well, how did that happen?

As our knowledge of this virus grows, we need to make changes. But the changes in Ontario have been an exercise in whiplash:

“The government is playing chicken, and I think they’ve actually lost,” says Dr. Andrew Morris, a professor of infectious diseases at the University of Toronto, and the medical director of the Antimicrobial Stewardship Program at Sinai-University Health Network.

“I think they thought that they could time things, regardless of their cynicism of how many people get sick. We’re going to be leading CNN and the BBC in the next couple of weeks. Who would have thought that a year later we wouldn’t have learned from other jurisdictions? But here we are.”

It’s not like the changes are perfect. Ontario needed restrictions, but it needed them Feb. 11, and even the current versions probably aren’t enough to actually reduce cases. A redeployment of vaccines by the risk profile of postal codes is a great idea, and necessary, though the CBC’s Mike Crawley exposed that five of the 114 vaccination hot spots were in fact less COVID-heavy than the provincial average, and that four were held by Progressive Conservative MPPs; meanwhile, seven ridings with much higher rates that were not designated as hot spots were all held by opposing parties.

In the end, it's clear that Mr. Ford can't handle a crisis:

He is in over his head, and it is the weakness that will linger. This failure has plenty of parents in his government, and the incompetence has been exposed in increasingly ruthless fashion, day by day. Sunday, the minister of education wrote a letter saying schools would stay open after the April break; Monday, the premier declared they would be closed. It’s a pattern. On April 1 the government announced restrictions, and changed them five days later as the baked-in numbers kept rising. The vaccination plan was described in great detail on Tuesday last week. Wednesday, it was completely different.

History will remember Doug Ford for his inability to handle COVID.

Doug Ford for his inability to handle COVID.

Well it may be his greatest débâcle but there are many more which historians can add. His attacks on the edocational system in general and depressingly bad environmental policies come to mind.

He appears to be a not very bright man with poor judgment who is completely out of his depth. He almost looked good for few weeks last spring when he was listening to health experts but he clearly has returned to only consulting with his incompetent kitchen cabinet. He is only reacting "positively" when the situation is so bad that he must. Unfortunately his measures look to be too little and too late. I suspect even Rob Ford would have done a better job and that is saying something.

Too little too late, jrk. That's it in a nutshell.

What's the problem? Rick Hillier is just a $20,000-call away. Wait a minute. I forgot that he was just hired to design the vaccination plan. Technical experts on the medical and epidemiological sides were available for consultation, but nobody was paid to listen to them.

Doug's confusion is a reflection of a day-trading mentality borne of the political mindset that libertarianism advances. When you attach no importance to an understanding of cause-and-effect, it's all just too easy until analysis is required and then you discover that the Market isn't paid to think. One solution is to confuse your constituents and then pick some of them to blame.

Indeed, John, the market doesn't think. We have lived for too long with the notion that the market is wise.

Ford called on the feds to procure vaccines for kids?! What a maroon! No Covid vaccines have been approved for kids. Pfizer was the first out the gate and they sought FDA approval for 12-15 year olds last week. They have yet to apply to Health Canada. What does Ford expect Trudeau to do? Give drugs to kids without safety and efficacy studies? That sounds like something Ford might have done.

"What's the problem? Rick Hillier is just a $20,000-call away. Wait a minute. I forgot that he was just hired to design the vaccination plan."

How's that working out for yer?

Hillier should be made to pay back his half mil for not doing a damn thing that produced results - good job he never had big war to fight!

This is Rob Ford's dim brother, isn't he?

Yes, he's messed up but he stands in a long line of screw-ups who tried to appease too many constituencies and lost the plot along the way. Is Jason Kenney really much better?

Covid-19 has been a learning exercise for all of us, each in his own way. It does drive home the peril of weak, myopic leadership which is pretty widespread these days. They keep us persistently behind the power curve, desperate to keep from stalling out.

These blunders have been a costly and murderous learning experience but there's no sign we're interested in learning. Experts have been warning us for years that there are massively seismic threats looming and we need to bolster our resilience and prepare to weather two or three of these events arriving either simultaneously or overlapping.

One lesson from the past we need to learn is that some emergencies require of everyone certain behaviours we reject in ordinary times. The anti-vaxxers, for example, are enraged at restrictions on their freedoms but insist on all the privileges of their communities, their societies. The rest bear the risks and costs of their selfishness. These people with their "super-spreader" habits play an outsized role in overwhelming hospitals and such.

My GP will not treat families that refuse to vaccinate their children. He doesn't want them mingling with other patients in his waiting room or in his examining room either. That's a perfectly justifiable position.

If a percentage of the population is indifferent to the risks and costs they create for other members of society, perhaps they should form their own communities of like-minded people, take whatever risks they choose and live or die with the consequences.

I suspect Hillier got out early because he knew all hell was going to break loose, Ben. The military has a word for this kind of screw-up.

We have lost the sense of the common good, Mound. Some of our movers and shakers keep insisting that selfishness is a virtue.

Hiring Rick Hillier looks to have been a publicity stunt. I don't think he was ever supposed to actually do something.

Lots of people aren't quite sure exactly what Hillier did, Toby.

With the odd exception around the world most Governments have played roulette with their covid responses.
Most play to their political base and not science.
Partisan politics has never been exposed for what it is until now.
It sure makes a mockery of all the calls for democratic institutions being for the benefit of all.

@ Cap
What does Ford expect Trudeau to do? Give drugs to kids without safety and efficacy studies?

At the moment he appears to be just flailing around in a panic. We would have to assume that Ford comprehends the vaccine development process to understand this "subtle" issue.

He may well believe that Trudeau should be cooking up a vaccine in the kitchen of Rideau Cottage. Remember that Doug's drug experience is on the delivery and retail end not the production side.

I agree, TB. Governments around the world have not seen COVID for what it is -- a public health crisis -- that cannot be solved by playing to the prejudices of a political base.

The irony is that -- despite his experience -- Doug's record on the distribution end is not very good. jrk.

.. I accept that it's a new frontier.. Accordingly I cut some slack.. A lot of slack. But I also recognize when partisan politics or quasi religion or 'smartest guy in the room' syndrome become part of the picture. The picture fractures. I told my son last year that COVID would become the 'great leveller' - that it would flatten the 'normal' landscape. I was both right and wrong, all at the same time. It was far worse than I realized.

That's the big lesson from COVID, sal. It's been far worse than we realized.