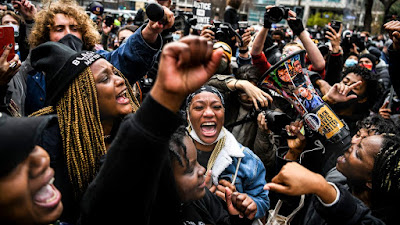 Derek Chauvin has been found guilty. Eugene Robinson writes that it shouldn't feel like a victory. But it does:

It shouldn’t have been an open question whether a police officer could kneel on a man’s neck for more than nine minutes, snuffing out his life, with complete or even partial impunity. We shouldn’t have had to hold our collective breath from the moment it was announced there was a verdict in the Derek Chauvin trial to the moment that verdict was read. This shouldn’t feel so much like a victory.

The jurors in Chauvin’s trial trusted their eyes and ears. They saw the video of George Floyd pinned to the hard pavement, they heard him plead again and again that he couldn’t breathe, and they held Chauvin fully accountable.

They saw George Perry Floyd Jr. — fully — as a human being.

In 1857, the Supreme Court of the United States declared that black people weren't human. They were "chattel" -- property -- and could be used or abused at their master's whim. And, despite the Emancipation Proclamation six years later -- and subsequent Supreme Court decisions -- the notion that black people are not human persists.

Yesterday's verdict was a clear rejection of that notion. Whether it will find its way into public acceptance remains to be seen.

Email ThisBlogThis!Share to TwitterShare to FacebookShare to Pinterest
Labels: The Chauvin Verdict

Here's the statement from Minneapolis Police shortly after Floyd's murder:

On Monday evening, shortly after 8:00 pm, officers from the Minneapolis Police Department responded to the 3700 block of Chicago Avenue South on a report of a forgery in progress. Officers were advised that the suspect was sitting on top of a blue car and appeared to be under the influence. Two officers arrived and located the suspect, a male believed to be in his 40s, in his car. He was ordered to step from his car. After he got out, he physically resisted officers. Officers were able to get the suspect into handcuffs and noted he appeared to be suffering medical distress. Officers called for an ambulance. He was transported to Hennepin County Medical Center by ambulance where he died a short time later. At no time were weapons of any type used by anyone involved in this incident.
The Minnesota Bureau of Criminal Apprehension has been called in to investigate this incident at the request of the Minneapolis Police Department.
No officers were injured in the incident.

Good thing a bystander videoed the incident or Chauvin would likely have walked.

That video has made all the difference, Cap.

This from the New York Times, Owen:

Mr. Chauvin, who was fired, has said through his attorney that his handling of Mr. Floyd’s arrest was a reasonable use of authorized force. But he was the subject of at least 22 complaints or internal investigations during his more than 19 years at the department, only one of which resulted in discipline. These new interviews show not only that he may have used excessive force in the past, but that he had used startlingly similar techniques.

I suspect there are many others who believe that Chauvin's actions were "reasonable," Lorne. There is much more to be done.

What appalls me is the level of authorized force.

This whole thing has been beyond comprehension for me. The one thing that sticks out in my mind though is the helplessness of the observers, white or black. One would obviously be hesitant to throw themselves at the murderous police official because of what might await the action. This is the power the police have. Even if you know what you are witnessing is wrong you would be in real fear of the outcome for your helping to save an individual. It would make me sick and would haunt me forever.

There are still plenty of people who believe that the best way to solve a problem is to use a hammer, Toby.

Unfortunately, zoombats, that fear of retribution is entirely understandable.

It's more than sad that, when the jury retired to deliberate, the "network experts" so heavily hedged their bets on the verdict. It reminded me how unpredictable America has become over the past two decades.

It wasn't just the media either. One CNN reporter standing outside the court house moments before the verdict was read mentioned that downtown office buildings had emptied out, employees sent home early, taking to the freeways to avoid a possible riot.

Yes, the killer cop didn't get away with it - this time - but how many Americans found the convictions an outrage? How many states have we seen enact Jim Crow voting laws in the past two months? How many blacks died at police hands in the course of Chauvin's trial alone?

Attorney general Garland has ordered a review of the Minneapolis police department. I'm certain that will be labeled a witch hunt.

Slavery was the original sin at the nation's birth, Mound. And the United States -- like Lady Macbeth -- has not been able to wash the blood from its hands.

.. I've mentioned previously in many media & forums how 'militarized' policing has become. It often works hand in hand with 'Politics' and the Judicial. In my view it's become outrageous. Whatever the 'hiring protocol' has become, it's beyond flawed.. run by prior hires who either fit or succumbed to the systemic koolaid and patterning.

I know tons of firefighters.. I know ZERO cops. They keep to themselves. I do meet decent cops here & there enroute home from hockey, but they give me major cred per my Drivers Licence Transcript special security background and that I ain't drunk. I give them total respect, civility and aside from spot checks, they have zero reason to give me grief.. the headlights are aimed, tail lights all working and I neither roll stop signs, speed or bang into folk from behind.

I'm tall.. old now and Caucasian .. It's amazing how well I have been treated at border crossings & airports. I have been handcuffed once only, suspected of stealing a motorcycle I owned. Once written up on 4 charges by a Scot cop who gleefully read my full black Irish name and had my car towed - he was dutifully trashed by a judge later in court - I have never needed, much less hired or could afford a lawyer. So being white & on the right side of the law sure is advantageous .. but check those tail lights !

Being white in our society is a privilege, sal -- a privilege that people of colour simply don't have.

Justin Trudeau caught in a roadblock whilst wearing blackface could be a conundrum?