Calling On The Ghosts 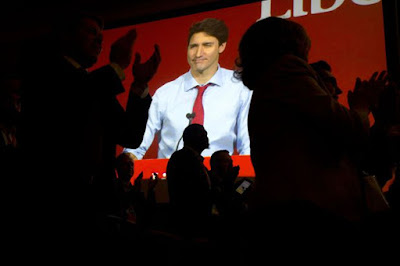 When Justin Trudeau came to power six years ago, he vowed that his party would not be the same old Liberal Party. Susan Delacourt writes:

Once upon a time, Trudeau made great efforts to cut his Liberal party’s ties to its past, even the history of his own father’s years in power. He abruptly disowned the senators appointed under past Liberal leaders as one of his first acts at the party helm. He vowed that a new, Trudeau-led party would close the book on past Liberal dramas.

But, at this week's virtual convention, he resurrected the ghosts of past Liberal prime ministers:

Anyone who has followed Trudeau throughout his path to the top of the party, there was no missing how Saturday’s speech was a change in tone toward ghosts of Liberal past, or even his own past.

He was introduced on the virtual stage by Intergovernmental Affairs Minister Dominic LeBlanc, who entertained the audience with anecdotes of babysitting Trudeau and his brothers, and the deep ties between his parents and two generations of prime ministers.

Trudeau began his speech with a gracious shout-out too to Turner, the “true Grit” who died last year. When he spoke of what further challenges awaited the Liberal party of 2021, during and after this pandemic, he said repeatedly: “There’s still work to do.”

It was an unmistakable reference to Jean Chretien's victory speech in 1993. As Trudeau asked his supporters to reach out to those who didn't vote for the Liberals last time, he also picked out his targets:

Trudeau doesn’t have as many neighbourly thoughts about Conservative leader Erin O’Toole, calling him and his party out for being “disconnected” from the world in Saturday’s speech. The Bloc Québécois also took a few hits from Trudeau, but not the New Democrats, notably, who are helping the Liberals stay in power.

Will the strategy work? We'll get the answer in the next election.

Libs normally target NDP voters with the old song and dance about a vote for the NDP is a vote for the Cons, so Trudeau must really be counting on Singh's support in the coming months. I expect that will change once the writ drops.

What seems to be forgotten is that the " old guard liberals " ran the party into the dirt: third place after Dion, Turner, Martin and Ignatiev were done. Trudeau changed thngs and won a majority. There are bloggers here who are still bitter that their advice ( which resulted in that third place ) was ignored .

If JT has any track record it's for promising great things and failing to deliver. He had it in his power during his majority to implement electoral reform, the key to restoring representative democracy to Canada. That was a matter of choice and he chose to ignore his promise, the platform that contributed heavily to his majority.

What Rumley overlooks is that Trudeau "promised" to change things. Those promises, and a revered name he never lived up to, translated into his majority. A good bit of Harper fatigue cinched that win.

Our focus is better placed on how the Liberals went from that majority to today's minority that survives solely by the good graces of the NDP and Bloc.

A lot will depend on how Canadians see things from the perspective of the pandemic, Mound. I honestly don't know what that looks like.

Trudeau had the opportunity to make Canada a country of equality and has not. When people work and continue to worry about taking care of essentials, it does not make make a country great. Anyong

Trudeau has missed opportunities, Anyong. But, as I wrote to The Disaffected Lib, my hunch is that a lot will depend on how the public views his pandemic performance. At the moment, I don't know how that will all shake out.

Trudeau could have been a transformational PM.
If he'd implemented the 2015 campaign promises.

Now he'll appear as odd cipher reference when history talks about his dad.

The choice next time will require some hard analysis, zoombats.

History may see Justin as Canada's John Quincy Adams, PoV-- just a shadow of his father.