Time For A Wealth Tax 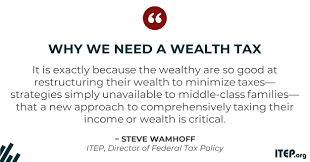 The federal budget will be announced next week. Linda McQuaig writes that it should contain a wealth tax. Unfortunately, the wealthy have been successfully arguing against such a tax for years. In fact, there already is such a tax. It's called the property tax. But McQuaig favours an NDP proposal:

An NDP proposal -- based roughly on proposals by U.S. Senators Bernie Sanders and Elizabeth Warren -- would levy an annual tax of one per cent on net wealth above $20 million. If you don't have $20 million, it's not coming for you.

The NDP plan would raise an estimated $10 billion a year -- or more if the rate rose for bigger fortunes, notes economist Alex Hemingway of the Canadian Centre for Policy Alternatives.

Several arguments have been advanced against such a proposal:

A wealth tax has not worked in other countries. The wealth taxes adopted in many European countries were badly designed. They had low thresholds, so they taxed many people who were not ultra-rich, just well-off. Today's proposed wealth taxes only target those who are clearly, undeniably wealthy.

The ultra-rich will find ways to evade or avoid the tax. Our tax laws, which permit widespread tax avoidance and evasion, are not laws of nature but policy choices made by legislators. Stopping tax evasion is simply a matter of political choice -- especially with today's technology that makes it easy to digitally trace the movement of money. An increase in Revenue Canada's enforcement budget -- to be used against tax haven trickery -- and tougher penalties for cheaters could be extremely effective. The only thing lacking is political will.

A wealth tax would discourage savings and entrepreneurship. Hardly. The tax would only hit those who have accumulated enormous assets, typically long after their initial entrepreneurial effort (or those who have inherited huge assets through no effort). Does anyone seriously believe that, in the future, creative Canadians would stop being entrepreneurial if they thought they would only end up with a fortune of, say, many hundreds of millions of dollars rather than perhaps a billion dollars?

Some wealthy taxpayers have very low incomes and thus might not have the cash to pay an annual wealth tax. If truly wealthy individuals have small incomes it's because they've arranged their finances this way in order to avoid paying income taxes. They could easily sell some of their assets. There's no reason to sympathize with their plight. After all, if working people lose their jobs, they're forced to sell assets (except their homes) until they're sufficiently poor to qualify for welfare benefits.

Back in the 1950's we had much higher marginal tax rates -- and the wealthy survived quite nicely. The difference between then and now is that now there are many more extremely wealthy people. Is there any reason to believe that they too would not survive nicely?

Email ThisBlogThis!Share to TwitterShare to FacebookShare to Pinterest
Labels: Taxing The Wealthy

"Biden has offered a “Made In America” tax plan that includes hiking the corporate tax rate to 28% and removing incentives for corporations to send factories and profits offshore. "

this is a good first step.
finally there is an adult in charge in the US

And Biden knows something about government, PoV. The former guy knew nothing -- period.

Such a measure is long overdue, Owen, but I have little doubt the Liberals will find reasons not to proceed with such a measure against their many wealthy supporters.

Enforcement is what's needed. As McQuaig points out, "Stopping tax evasion is simply a matter of political choice."

Following the release of the Panama Papers, other countries recovered far more tax owing than did Canada and, unlike Canada, sent scofflaws to prison. None of the people that used KPMG's Isle of Man tax scheme were criminally charged and neither was anyone at KPMG. KPMG was protected so the government could continue to outsource work to them.

These are all political choices. And until politicians choose to enforce the Income Tax Act against the wealthy, a wealth tax will just be window dressing.

Point well taken, Cap. Any tax is only as could as its enforcement mechanism.