The Folly Of Killing Sick Days 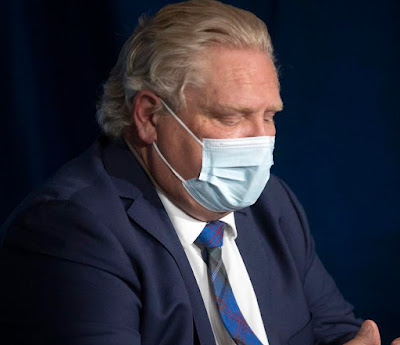 Doctors have been pleading with the Ontario government to legislate paid sick days. Apparently, Doug Ford -- now that he is self-isolating -- is considering the policy. Martin Regg Cohn writes:

This province long ago closed its eyes not merely to a natural virus, but to our own human nature. COVID-19 spreads in unpredictable ways, but our premier acted in utterly predictable ways and his supporters never gave it a second thought.

To understand how we got here — in mid-pandemic without payroll protection for sick workers — we have to go back to pre-COVID times and ask ourselves:

Ontario's previous premier -- Kathleen Wynne -- had legislated two paid sick days for Ontario's workers. One of the first things Doug Ford did when he came to power was to get rid of them -- claiming that they were "job killers:"

Too many businesses begrudge workers who ask to be paid a day’s wages when they book off sick — seen as something for nothing. Bigger companies can afford to be more generous; unionized firms are compelled to be more accommodating; but left to their own devices, most businesses will duck — and dock pay.

The business lobby pushed back hard when a previous premier (ah yes, remember Kathleen Wynne?) changed the law to require two paid sick days for workers. It will be the death of us, they argued — we can’t afford it.

Pre-pandemic, his popularity at its peak, basking in his honeymoon, Ford wiped out Wynne’s other social reforms — including a $15 minimum wage, free pharmacare for young and old adults, a basic income pilot, a ban on doctor’s notes.

“Keep fighting with me — you know that I’m here to fight for the little guy,” Ford said in late 2018 as he set his sights on sick pay.

How things have changed:

An open letter to Ford early last year from health-care experts noted, “The medical literature consistently states that employees with no sick leave are more likely to go to work and expose others to infection.”

That’s why we elect governments to step in to do the right thing. What was indefensible then remains unfathomable today.

I like your last line Owen, personal experience will teach Doug something? Thoroughly tongue and cheek. He is incapable of learning anything; when appearances of doing the right thing fail, he slithers away. This nasty third wave, entirely predictable and getting worse by the day, only summer and vaccines can lessen its effects but what about after that? There's enough anti vaxxers out there to all but ensure this will drag on into the fall and next winter. Out here in BC, too, our bragging rights long disappeared with the asinine, "let's live with the virus, bring the health care system to the brink and then repeat" strategy ensuring also, that this will not go away as anticipated, growing anti tax sentiment also, will kill any progress. Shameful that we got here as a nation, but at least Atlantic Canada got it right.. BC Waterboy

Doug's personal experience is paid sick days. All MPs, MlAs, MMPs and whatever else they are called across the provinces and territories personally experience paid sick days at 100% of their usual rate, not at a portion of their pay or up to a cap.

Ford's not losing any pay by staying home, let alone getting fired like a precarious worker. Nasty things like that happen to "the little guy," not the likes of DoFo. The little guys should have chosen their parents more wisely.

Yes, Atlantic Canada got it right, waterboy. It's all about character.

A progressive attitude has taken hold in the Ontario CRAP Party since the Mike Harris days. The "powerless losers" of Ontario have responded to the outreach. They realized they were much better off to acknowledge their status as "little guys" and get with the programme and on with their side-hustles. Social coöperation and acceptance of personal responsibility have replaced the class struggle. An emergency such as this pandemic reinforces our understanding that we are in own places all in this together. If our transition to a side-hustling economy had been closer to completion, there would be less need and discussion of worn out notions such as "sick days". A man like Doug Ford can lead us there.

Unfortunately, you can't teach an old Doug new tricks, Owen. He lives the delusion that he is one of those "hard-working" "self-made" men that always pulled themselves up by the boot straps and carried on.

I think most folks know that this is Doug's illusion and, in the long run, he is unlikely to change. Oh, he can look sad and repentant once in a while and appear like he's had a "coming to jesus moment, but that's just for the media and some of his disappointed followers, but its a mere blip on his personal horizon.

Steve's comment about the benefits politicians of all stripes is important, because a large per cent are from the conservative ranks and are paid for by all taxpayers. Obviously, their supporters see no problem with that but still cannot agree that all Canadians should have access to these same benefits. Funny, isn't it?

It's beginning to sound like he'll lead himself there, John -- kicking and screaming all the way.

It's hard to be for everyone, Lulymay, when you're also for privilege.

Doug is now getting a taste of his own medicine, Cap.

The truth of this matter is “getting something for nothing” is an awful attitude for any millionaire to espouse. The long time wealthy of this country made their money on the backs of the poor. How dear Ford talk about people wanting to be paid sick leave when he receives it on the backs of the Canadian Tax Payer.Then to boot, turn around and say...people will do anything to try and get something for nothing. What a fool. Most people want to work without stealing from their follow worker. Anyong

When these folks argue that we can't afford sick days, Anyong, they ignore the price we have already paid from COVID.

Anonymous Lulymay said...
Unfortunately, you can't teach an old Doug new tricks, Owen. He lives the delusion that he is one of those "hard-working" "self-made" men that always pulled themselves up by the boot straps and carried on.

Yet another myth bites the dust!
As I have posted on the M of S site; our lifestyle our metrics have changed .
Socialism has never before been so so welcomed be it teenage 'welfare' cheques or Air Canada bailout monies.
The world financial systems and the worlds socialist systems seek to make themselves relevant in this age of confusion.

COVID has proved that rampant individualism is no match for a virus, TB.