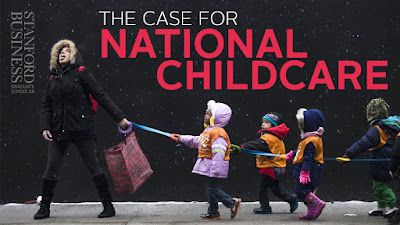 We may be on the cusp of a national childcare program. Why has it taken so long to get here? Susan Delacourt writes that all three of our major parties share the blame:

Start with the Liberals. It is true that the past Liberal government delivered a national child-care program, province by province, with the final deal sealed just before the 2005 election that would send Paul Martin’s government to defeat.

Stephen Harper’s Conservatives campaigned against that Liberal child-care system, arguing that their proposal to give money directly to parents was the better way. “Choice in Child Care,” it was called, and parents would get $100 a month. When the Conservatives won power in early 2006, they duly sent out the cheques and dismantled all those deals that the old Liberal minister, Ken Dryden, had put together.

New Democrats had a hand in that defeat for child care by bringing down the Martin government, as Les Whittington, former political reporter for the Toronto Star, noted in a column this week for the Hill Times.

So did the voting public, mind you. As Dryden said a few years later, he kept running into voters in the 2005-06 election who were sure they would get to keep the best of all worlds: the Conservatives’ cheques for parents and a national child-care program.

That history should teach us a few lessons

Liberals are proposing to go at this new program with more money — lots more — than what was on the table in the 2000s. But while the $30-billion over five years is certainly more than the $5-billion Martin and Dryden promised, the process is close to identical: protracted negotiations with the provinces, with the hope that one plus one plus one over the long haul will eventually add up to something national.

That may be the only way we get to national programs in this fractured federation — Canada’s cherished national health-care system came about the same way, after all — but it’s a slow road, littered with petty bureaucratic and political dramas.

Put it this way: if you liked how the various levels of government worked together for national vaccine rollout or paid sick days, you’re going to love the new child-care program.

And the Conservatives are ignoring their part in that history:

Conservatives, meanwhile, have displayed remarkable nerve this week arguing that Liberals failed to deliver a national child-care program that they killed 15 years ago. They have, however, managed to remember just how much they preferred the idea of cheques going directly to parents — all that “families know best” stuff they’ve dusted off for use in another decade.

“The problem with what the Liberals are proposing I think is worse because it limits a family’s choice,” Saskatchewan Conservative MP Corey Tochor said this week. Tochor wasn’t an elected politician back when we last did this child-care drama, but he has the old script intact. “We should be trusting families to make the choices that are right for them.”

Finally, we may get national childcare. Maybe. If we don't screw it up.

We have been around the block a few times on this issue. The eternal cynic in me refuses to believe anything I hear from anyone.I know I'm flogging a dead horse here but I still smart from the big lie on electoral reform and others. On the eve of an election we have been fed a shovel full of promises that were made to be broken. It seems though that even the choice from the the pool of protest votes is getting shallower.

Having seen how disgusting the NDP can become when it attains mainstream status, as is the case in British Columbia, and having been a long-time critic of the direction of the federal NDP and it's shithead team of professionals, ... I am not an NDP partisan.

But still it rankles me to see this bullshit about how the NDP carries ANY blame whatsoever for the defeat of Paul Martin's minority government.

Paul Martin was given a clear choice: Stand up to the creeping privatization of the Canadian healthcare system or lose power (and therefore all the wonderful policies that it took the Liberals 20 years and the loss of majority power to finally get around to doing).

And I still remember the way that Paul Martin used the Unemployment Insurance premiums as a cash-cow to fight deficits (that weren't caused by the welfare state) as well as to deliver on his tax-cuts to the wealthy.

Liberals need to learn to take responsibility for their own actions.

You'd have thought the success of Quebec's childcare programme would have spurred imitators in every other province. Unfortunately, the English-speaking provinces contain large numbers of Ayn Rand purists who believe taxes are slavery and government programmes are Stalinist. If only there were a way to put the little devils to work and charge their parents for the privilege...

I read that, at the end of her life, Rand was quite happy to accept government assistance in the form of Social Security, Cap. Unfortunately, her admirers don't know that she was a phony.

I agree, thwap. Liberals like to blame their sins on somebody else.

Child care was first proposed in Canada in May 1971 by Ed Broadbent. I stayed home to look after my children and they were involved in many activities. I lost my skills and had to re-educate myself after my children reached 18. This resulted in a divorce and
I have never been able to reach a place where
I will be secure in my older years. If all governments in Canada cannot reach an understanding regarding the extreme importance of education in a child’s young life then two issues need to be forced upon all governments in this country: First, get rid of this pathetic Co-operative Federalism. Second: send a Delegation to a country where they are successful with early education like Norway for example to learn how it is done. And last, FIX IT so it can not be rejected or changed by any incoming government except for change for betterment in the future. There are four ares that should not ever be fiddled with by goverment, education, health care, employment and retirements.Anyong