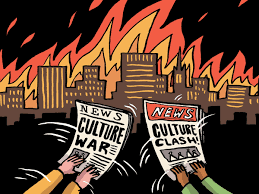 Last week, that blonde flamethrower from Georgia -- Marjorie Taylor Greene -- declared that she was a member of "The America First Caucus," which she said was dedicated to "Anglo-Saxon values."  She and the whole Republican Party are waging a culture war. Why? Max Boot writes that the answer is easy to understand if you follow the money:

Decades ago, in 1992, the New York Times ran an earlier exposé of Republican fundraising. The direct-mail pioneer Richard A. Viguerie had started an organization called the United Seniors Association that bombarded retirees with letters warning that “All the Social Security Trust Fund Money Is Gone!” and demanding $5 membership dues to protect their benefits. Most of the money raised went into more fundraising — including generous payments to Viguerie’s own companies.

Viguerie, who had once worked with George Wallace, was one of the creators in the 1970s of the direct-mail fundraising juggernaut that helped elect Ronald Reagan and lots of other Republicans. But the direct-mail wizards raised money by introducing to politics the kind of high-pressure sales tactics normally reserved for the sales of penny stocks or timeshares. Before long, the profit motive became as important as politics. While fleecing the faithful, the fundraisers radicalized Republican politics.

As Terry Dolan of the National Conservative Political Action Committee said: “The shriller you are, the better it is to raise money.” Conservative fundraising appeals, now on the Internet, depend on “triggering” right-wing voters on incendiary issues such as abortion, gun rights, marriage equality, transgender rights, immigrant “invasions,” and now “cancel culture” and “wokeism,” while warning of imminent doom unless you send in your donation today. That creates a financial imperative to wage culture wars to keep the cash registers ringing.

Mickey Edwards, a former Republican member of Congress from Oklahoma, recently wrote in the Bulwark about his experience as chairman of the American Conservative Union in the early 1980s, when the process was just beginning:

“The ACU, and conservatives generally, had long been focused on a few things — keeping taxes low, keeping regulation in bounds, adequately funding national defense, and, more generally (this was how conservatism was defined in political terms), prudence and skepticism in the face of proposals for sweeping overhauls. However, what I found in the fundraising letters I was being sent to sign were harangues centered on social issues. Waging the culture war was a more effective way of raising money.”

War has always been hugely profitable for some. For Republicans, a culture war makes the cash registers ring.

Email ThisBlogThis!Share to TwitterShare to FacebookShare to Pinterest
Labels: The Republican Culture War

Is it just me or does Greene look like George Chuvalo's love child? (

An interesting observation, Mound. Like most of us, I suspect that Greene's family tree has lots of non-Anglo-Saxon roots.

From what I've read, Greene has been receiving massive amounts in donations. She and her gang have a significant following. I know one, I suspect two, who are in those ranks. The moral compass is off its gimbals.

The phrase "the smart money" no longer applies, Mound.

Looks like the America First Caucus cancelled itself. Probably just as well. As I understand it, the Normans cancelled Anglo-Saxon culture back in 1066, chanting "Jutes will not replace us!"

I wonder if those guys protesting in Charlottesville know who the Jutes were, Cap.

guys protesting in Charlottesville know who the Jutes were

To be sure , most of them do not realise that there was an established culture in North America before the white man showed up!

The teaching of history is the most overlooked omission of world wide education.

Perhaps this is not an oversight from our leaders??

And as George Santayana remarked, TB, those who refuse to learn from history are doomed to repeat it.

The focus is on administration, John -- not what she's administering. She appears to be a woman full of hate but empty of content.