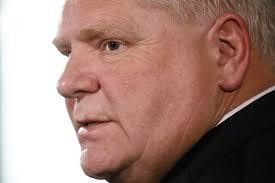 Bruce Arthur was with medical professionals at the Brampton Civic Hospital when Doug Ford announced his government's latest plans to fight COVID:

The doctors and nurses and respiratory therapists watched Doug Ford’s press conference from the respirology ward at Brampton Civic Hospital. Brampton Civic is one of the hardest hit COVID-19 hospitals in the country: every day the ICU and the wards fill up, and doctors transfer patients anywhere they can find a bed, and then they do it all again. When the system starts to collapse, people think Brampton Civic will be the first hospital to fall.

The premier was on the screen. The hospitals are destined to be crushed; the modelling the province didn’t believe is coming true. This was Ontario’s third escalation of restrictions in three panicky weeks. Maybe this would be the moment the government truly took this seriously.

Ford began to speak. “The reality is there are few options left,” he said. Then he announced what his government would do.

And, as Ford announced his new plans, the anger exploded:

“It started out with pure anger when I watched the press conference, because there was the feeling that they might actually recognize who is actually getting sick from this and dying from this,” says Dr. Brooks Fallis, an ICU doctor at Brampton Civic. “They’ve done nothing to meaningfully protect them. And today they prioritized allowing those people who can stay at home to have non-essential goods made and delivered to them by people who end up in the ICU. It just felt like today was sending a whole lot of people to their death when they didn’t have to.

“And when the whole system starts to collapse and we run out of patient transfers and the emerg backs up into the parking lot, that’s when people will start to die who didn’t even need to die with the virus.”

“If we want to bring the numbers down we need to focus on exclusively restricting indoor spaces as much as possible, and making outdoor spaces as safe as possible,” says Dr. Peter Juni, the scientific director of Ontario’s independent volunteer science table. “There is no way to be safe with other people indoors under the current circumstances. There is no way. Not in places of worship, not in big-box stores, not anywhere else.

“I feel sick,” says Dr. Ashleigh Tuite, an epidemiologist at the University of Toronto who has contributed work to the science table. “I actually feel sick. Every week we have this buildup, and is this going to be the week where suddenly they get it, and they’re actually going to do something to make this better, and if they don’t get this now they’re not going to get it. It’s been a few hours, but I'm still shaking.”

“I do feel defeated,” says Dr. Michael Warner, the head of critical care at Michael Garron Hospital in East York. “I’m kind of past anger, and on to defeat. I’m guess I’m just resigned to our shared destiny. I cannot see any circumstance where I can now protect my patients from being forced to be palliated because of the lack of beds.”

There is only one inescapable conclusion:

Idiocy is even more deadly than COVID.

As they say, Owen, when you elect clowns expect a circus. That's exactly what we're getting.

possibly part of the Ontario problem
he is making about 3 million a month? in this wreck?
why would he kill that golden goose
when all the blame can go to everybody else cause
he pleaded don't do it
classic conservative

Thanks for the link, lungta. Doug knows how Disaster Capitalism works.

Who would have thought you could make that much money printing labels? What's so special about the ones this insider makes?

Once again, a good question, John. I suspect that Doug is a good coupon clipper. His assets have been diversified. There's a lot of money that has not been invested in labels.

That's the problem when people like Doug acquire/inherit that amount of money - the always seem to need a hobby and, in this case, Doug's "hobby" is politics. Might be fun for him, but I sure pity the people in Ontario because what they got in Doug was crickets.

There were plenty of warnings and there was plenty of history, Lulymay. But a majority of Ontario voters ignored all that.

Doug is still a blazing idiot but it has been fun watching him advance rapidly rearward on some of the worst parts of the lockdown. The semi-revolt by the police services was fascinating.

What next? By Monday morning, at least a provincial sick leave program? Naw, Doug is too mean and too stupid to do that. I get the feeling that he is in a blind panic and unable to hear let alone comprehend expert advice. He was never very good at listening to experts but this has hit a new low.

He makes decisions with his gut, jrk. Careful analysis is not what Doug does best.

He makes decisions with his gut
Obviously size isn't everything.

Doug is a big man who lacks a big brain, jrk.