The Tune Has Changed 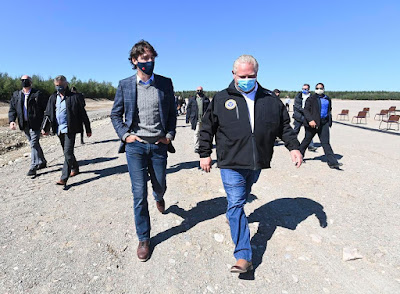 Ontario used to think of itself as the crown jewel of the Canadian provinces. But, this week, Newfoundland and Labrador  -- who Ontarians used to think was Canada's neediest province  -- sent in a medical team to help Ontario in its fight against COVID. Among them was Dr. Allison Furey, the wife of premier Andrew Furey who -- like his wife -- is a doctor. Susan Delacourt writes:

The pandemic has officially turned the rules of Canada’s federation upside-down — Ontario is now a have-not province in COVID-19’s brutal third wave.

This is a notable development in the short and long lens of history. In the immediate term, it means that Ontario’s stay-at-home orders have now escalated to the level of a national emergency in the province. In the larger picture, Ontario finds itself in the not-so-traditional place as a taker, not a giver, of aid in this country.

This moment has looked inevitable for at least a couple of weeks now, as the province continued to post record high COVID case counts and surges of patients into acute and intensive care units of beleaguered hospitals.

Friends don’t keep score in tough times, but politicians do, and it might be a bit of a stretch to describe relations between Ontario and Ottawa as “friendly” in this stage of the pandemic.

A year ago, when Deputy Prime Minister Chrystia Freeland and Ford were having nightly “therapy” calls, it looked like a real, enduring friendship was blooming. But over the weekend, Freeland said in a Sunday CBC interview she hadn’t chatted to Ford recently. She had instead passed along her best wishes in a budget-related call with Ford’s finance minister.

The Ontario premier hinted a few weeks ago in a press conference that he had taken some guff from other first ministers about how often he complimented the feds through the pandemic. Perhaps it was that peer pressure, or his own declining poll numbers — or maybe the relentlessly descending situation in Ontario — but the shout-outs to the federal Liberals have definitely been fewer and far between.

When asked repeatedly about whether he would ask Ottawa for help, the premier more or less said that all he needed was more vaccine, which was Ottawa’s job. Oh, and stricter lockdowns at the border; also Ottawa’s job.

In Ottawa, meanwhile, Trudeau and his team would say they were standing by, giving Ontario what it wanted, but insisting that vaccine rollout and running the health-care system is a provincial job.

The difference here from the first wave is that political blame is now a rolling force in 2021; something politicians are trying their hardest to avoid or deflect.

The times and the tune have changed.

Email ThisBlogThis!Share to TwitterShare to FacebookShare to Pinterest
Labels: Ontario And Ottawa In the Pandemic

One of those nurses is my niece.....Good on Newfoundland and Labrador. It was FDR that coined Newfoundland uneducated and backward. Anyone know about the excellent contribution Newfoundland made during the first and Second World War? Then Britain turned its back by refusing to give Newfoundland back it’s Responsible Government in 1946 and Newfoundland ended up where it is today still being considered second class. Alberta has 39% crude and Newfoundland has 37% sweet crude. Of course Alberta includes tar oil in order to make 100% oil.Anyong

Newfoundland has been misunderstood for decades, Anyong. Now Newfoundlanders are giving the rest of us the comeuppance we deserve.

Victory has a thousand fathers, but defeat is an orphan. -- John F. Kennedy

The Covid virus has defeated Ontario three times now and finger-pointing has reached a crescendo. After a promising initial response to the pandemic, both federal and provincial governments have shifted away from doing what's needed for public health when that would involve creating a more equitable society. So no paid sick leave for everyone and no guaranteed basic income. As always, the unwritten goal is to force people to work in unsafe workplaces for wages that don't cover the cost of living, so that others can live in unimaginable luxury.

Crown jewel, my arse. Ontario always had delusions of grandeur. Why do you think we built those mountains?

"I thought somebody else was doing that."

They'll need a bigger catcher's mitt. Did I get this right? Doug is going to solve things by throwing five billion at the LTC parasites? I guess Chainsaw Mike got antsy over worrying that precious moments of this crisis were going to waste.

Minister Fullerton pointed the finger at the previous government more than half a dozen times in the Q&A portion of her presentation today. She's got a point. When the Liberals are handed the keys to the playhouse, they seldom do anything to address the outrages that CRAP Party inflicted on us when they had a lock on them. Teamwork.

It's all about passing the buck, John.

Where the stuff comes from, sal, is less important than getting off the stuff completely -- or at least using much less of it.

2:41 My comment was to say Allberta calls bitumen crude which it is not. Newfoundland's oil is all sweet crude while Alberta's is only 39 percent. Alberta likes or it ought to be said Kenney likes to call all oil produced, crude...it's a lie. Anyong

Mr. Kenny's oil is in a class all by itself, Anyong.

As a kid growing up in Montreal, I must admit that we had certain preconceptions about Torontonians, Mound. We used to say that, in Hogtown, they rolled up the sidewalks after nine o'clock on a Saturday night.

Some people like to say they were born and raised other than were they are located now...pops. Anyong

It's been my experience that, if you leave the place where you were born and raised, you also change your perspective. And that's all for the good, Anyong.

We used to say that, in Hogtown, they rolled up the sidewalks after nine o'clock on a Saturday night.

I am pretty sure that I have read descriptions of visitors to Toronto fleeing to the fleshpots of the Niagara Peninsula for the weekend---however I believe this may have been, mainly pre-WWI. Still, in the 50's and 60's I have heard that Montreal cinema owners used to pray for the headline, "Movie banned in Toronto!".

The next premiers' conference should be interesting assuming Doug manages to turn on Zoom.

My friend's father -- who grew up in Montreal and had worked both there and in Toronto -- said, "Toronto has no savoir-faire." He was Montreal Irish, not French Canadian. But that remark was pretty common on both sides of the language divide, jrk.