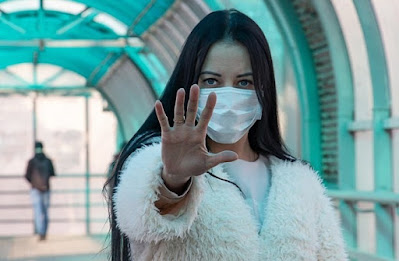 We have been dealing with COVID for over a year now. It's clear that in  North America and Europe we've failed on several fronts. Andrew Nikiforuk writes:

Canada’s failures mirror what many critics call a “total system failure” in public health throughout North America and Europe.

In contrast, many East Asian countries — applying the lessons learned from SARS — acted quickly and were prepared.

Some of those failures go back a long way:

Established after the 2003-2004 SARS outbreak in Ontario, the Public Health Agency was originally staffed and run by scientists. It’s National Microbiology Lab in Winnipeg contributed to the global fight against Ebola and other diseases, and was world-renowned.

But under Stephen Harper’s Conservatives, the government replaced scientific experts with political operatives and bureaucrats at the agency and other ministries. For example, it demoted the chief medical officer to the role of adviser and installed a president with no scientific background as head of the agency.

The Liberal government did not correct these changes or the trend to downgrade scientific capacity in the government.

In 2019, the Liberal government further undermined the Public Health Agency’s pandemic mandate by neutering the role and function of Global Public Health Intelligence Network because the government no longer considered pandemics a real threat to national security.

The Public Health Agency’s president, Tina Namiesniowski, resigned last November. And the head of the National Microbiology Lab, Matthew Gilmour, abruptly left the lab last May during the beginning of the pandemic.

1. Caught flatfooted on surveillance. The agency was not adequately prepared to respond to the pandemic, “and it underestimated the potential impact of the virus at the onset of the pandemic.”

2. Failure to practice responses ahead of time. Prior to COVID-19, the agency did not complete a test of the efficacy of its Federal/Provincial/Territorial Public Health Response Plan for Biological Events. It was going to simulate the impacts of an influenza pandemic.

3. No plan until pandemic was six months along. As a consequence of these failures, the agency didn’t complete a plan for the COVID-19 pandemic until August 2020 or six months after the declaration of a global pandemic.

4. No early alert. The agency’s Global Public Health Intelligence Network, whose job was to provide early warnings of viral trouble, did not issue an alert on COVID.

5. Misreading the COVID-19 threat. The federal government has launched an independent review of the effectiveness of the GPHIN and its contribution to public health intelligence domestically and internationally.

The Public Health Agency had a model for doing 24-hour rapid risk assessments on novel pathogens, but it had never been formally evaluated or approved. It rated COVID as a low risk.

6. Not making sure health measures were followed. In terms of border control, the auditor general found that the Public Health Agency “did not always meet the targets it set to verify whether travellers subject to the mandatory 14-day quarantine upon entering Canada were following the quarantine orders” between March 31 and June 30, 2020.

The lessons are everywhere. Whether we will learn from them is an open question.

I have just skimmed the AG's conclusions but the Gov't of Canada's situation seems to mirror that of a lot of national and provincial/state governments around the world. Reduce funding/priorities for public health agencies because nothing has happened in a few of years. Then, when the s**t hits the fan we are left with a mess. I believe we may have been lucky in Ontario that the Ford regime had not managed its planned consolidation of the public health agencies in Ontario.

I had not noticed the more egregious issue of the Harper Gov't making the post of president a political appointment. The last one I remember was an academic doctor who probably knew what he was doing but that was close to 20 years ago.

It is clear from the performance of countries such as China (after some confusion and delays in Wuhan), Vietnam, South Korea, Taiwan Australia and New Zealand that it is possible to contain the virus if not eradicate it but one must move quickly which I assume means having the resources and political willpower in place. Clearly the Public Health Agency of Canada lacked both.

I really wonder just how serious was the lack of political will? Judging from the timeline it looks like the PHA at least recognized a potentially serious problem in mid--late January but the Gov't took no real action until March.

BTW, the lack of a functioning Global Public Health Intelligence Network is symptomatic of PCA problems in general but I don't see it as all that important in this case. China had notified WHO of the Wuhan outbreak by (depending on your time zone) 31 Dec 2019 or 01 Jan 2020 which appears to be 1--2 days after Wuhan had confirmed a new virus and alerted the Chinese CDC. Taiwan, if I understand the reports correctly, had activated its emergency procedures and was screening flights from Wuhan that day or the next.

That's essentially my understanding, too, jrk. After SARS we built an infrastructure to deal with pandemics. But, because we were lucky, we felt we didn't need that infrastructure.

We need to look at how our Maritime premiers dealt with the pandemic: they have relatively few cases of the virus compared to Ontario, and their economic life is returning to normal levels. From early on, they acted aggressively, and at no stage since have they mistaken a momentary reduction in cases as a reason to open businesses and/or relax covid restrictions. In Ontario we are about to face a terrible reckoning for a childish lack of discipline. The blame for our grief belongs as much to us as individuals and our current provincial government as it does to the failures of federal governments.

The most maddening thing is this: "The Liberal government did not correct these changes or the trend to downgrade scientific capacity in the government."

Trudeau was elected in 2015 on the promise that he would "follow the science" and undo Harper's policies that cut the legs out of scientific advisors in nuclear energy, fisheries and oceans, inland waterways, environment, and, yes, pandemic management. Six years since his election, nothing's changed. Would a Con government be content to leave Harper's changes in place? Not a chance, they'd be busy making things worse. So why do the Libs act as a pawl in the ratchet rather than doing what they promised and reversing Harper's policies?

It takes character to make hard decisions, CD. Unlike our maritime premiers, there's a considerable lack of character in most of the rest of the country these days.

The Libs had the opportunity to fix the damage Harper did, Cap. On the public health file, they failed.

.. I grow more and more concerned about 'partisan politics', sold out Mainstream Media & Religion.. by the minute. None should have anything to say or do re Healthcare, Education or Environment. We now see it across the board that they think it's their private domain to meddle in. The buffoonery of John Horgan, Jason Kenney, Moe, Pallister.. Doug Ford is astonishing. They say one thing.. Do another. They're all just elected MPL's or MLA's or even MP's.. They are not Thoracic Surgeons, Master Educators, Marine Biologists, Epidemiologists.. they're partisan political parasites.. When we as citizens start electing Independant Local Candidates - whether fisherman or women, teachers, nurses, truck drivers, family doc's, miners, loggers.. we are going to make progress. I may have more to say on these matters later.. Right now though, I'm watching the hammer fall from COVID.. It's going to hurt, it's going to kill.. It is hunting us. It likes hitching a ride in our ventilation systems.. I been saying this for well over a year. We are sharing oxygen with COVID & each other.. and 'our political parasites' are prattling on re the ever exponential hold moly ECONOMY .. and what fighter jets to purchase & who is screwing with the vaccine statistics.. Buffoonery r Us !!

9:52....you are very close to the truth. I was in South Korea when this thing broke on Arirong tv in S. Korea during the first week of November 2019. Then at the end of the third week of Nov 2019, the Chinese knew they had something bad on their on their hands.Then on December 10, 2019 the Doctor who had been researching this problem died in China. On Jan 4, 2020
I fell and broke my left shoulder and was in hospital in Andong, S.K.. The doctors came to me on the 9 of Jan and told me I ought to go home (Canada) because they were expecting a pandemic. I flew on the 13 of Jan. When I got to the hospital in Alberta on the evening of the 13, they didn’t know one thing about COVID and looked at me as if there was something wrong with me. I was in contact with my Korean friends who kept me informed as to what was happening there. If Canada didn’t know what was happening before the end of February, then they are simply lying. Anyong

Asian countries learned from SARS, sal. So did we. And then we forgot.

As I wrote to the salamander, Anyong, the Asians knew what they had to do. And they were looking after your welfare. Back here, we were out to lunch.

I completely agree with the salamander. I lived for 16 years under a BC Liberal (Conservative) government that was totally corrupt. The NDP and my fellow believers challenged them on most of their indiscretions as we watched them load every board and institution with their lackeys.
Finally, the NDP take control of government and everything that we expected to happen did not. The same people are still there. When Fazil Mihlar (a Fraser Institute right wing propaganda mouthpiece) remains Deputy Minister at B.C. Ministry of Energy, Mines & Petroleum Resources I know we are screwed. The Campbell/Clark ideology remains in power today, the only difference being MLA's that pretend to be NDP!

@ Anonymous Cap 11:13 am
Trudeau was elected in 2015 on the promise that he would "follow the science" and undo Harper's policies that cut the legs out of scientific advisors in nuclear energy, fisheries and oceans, inland waterways, environment, and, yes, pandemic management. Six years since his election, nothing's changed.

Actually a lot has changed, The Harper paranoia and complete attack on science is gone. NRC scientists can publish and even talk to the press without 105 PMO e-mails. The problem is that the Trudeau Liberals have not repaired some of the damage, the PCA being an excellent example, nor greatly advanced the agenda in some cases, though the carbon tax decision in the Supreme Court probably should be viewed as a victory.

I agree, Rob. The faces change, but the policies remain the same.

There is a deeply rooted policy establishment in government, jrk. That's why, as a wrote in response to Rob, that the faces change, but a lot of the policies remain in place.