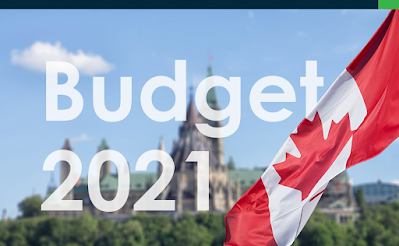 Budget 2021 is big. It has many moving parts. It breaks records. It weighs in at 700 pages. Over six years, there is $143 billion in net new spending. There are 10 priorities. If one takes the time to add up all the line-item spending initiatives for all priorities, you will exceed 250.

This is a spending budget. It is not a spend-and-tax budget. There are relatively few significant tax measures of notable consequence for the fiscal bottom line. Higher taxes for e-commerce; some luxury goods; limits on interest deductibility; and, course, tobacco. Taken together, these taxes will raise about $10 billion over the next five years. Not pocket change, but not enough revenue to fund a higher Canada Health Transfer, a national pharmacare program or a much stronger social safety net system with a basic income component.

So there are a lot of things that are not in this budget. But the really big take away is a national childcare program. Paige says it will generate a lot of economic stimulus:

It is the one signature and legacy initiative that carries the greatest prospect of boosting long term growth and well-being. Some $30 billion over five years has been set aside. Negotiations await. Notwithstanding broad public and analytical support, the provinces are living on a tight fiscal string. Quebec already has the model program. Others are playing catch-up. The final shape of a national program will be debated in provincial and territorial capitals in the months ahead.

The government is betting that, if we can get COVID under control, stimulus  and pent up demand will grow us out of the deficits we have created:

The government is committed to fiscal stimulus. It signaled this intention in the 2020 Fall Economic Statement. It is allocating more than $100 billion over the next three years with about $50 billion set aside in 2021-22. The scale of the stimulus in 2021 is even larger when you add more than $20 billion in measures announced last fall. It is a lot stimulus (at least three times the federal stimulus provided in 2009) for an economy projected to rebound strongly this year when vaccinations are in place.

The Liberals are also betting that this stimulus will not severely overheat the economy:

Clearly, the federal government is willing to risk the potential for an overheated economy and higher short-term inflation should the release of pent-up demand, higher savings and optimism become a reality. It wants a strong kickstart. It wants to put COVID-19 in the rearview mirror.

Conservatives will scream that the budget will lead to hyperinflation. They will be apoplectic. But they also believe that climate change is a hoax. The NDP will howl that we need much more stimulus -- in the form of a national pharmacare program.

Who's got it right? Time will tell.

Email ThisBlogThis!Share to TwitterShare to FacebookShare to Pinterest
Labels: Budget 2021

And when it comes to a national child care program, this time the Liberals really mean it. Really!

The $8.4 billion that goes toward early learning and child care doesn't get spent until 2025-2026, well after the next election and potentially even the one after that. In other words, it's a carrot on a stick that some voters may one day get to eat. Meanwhile, if you're an essential worker who needs to pay for childcare to show up for work now, you're SOL. Colour me skeptical.

As I wrote, Cap, time will tell.

How did you perceive the future on New Year's Eve, 2020? How does that compare to where we find ourselves today? What we thought so predictable 16 months ago has been stood on its head. Yet this budget is premised on predictions of a now unpredictable future.

We're experiencing what is now called the Great Acceleration. The world is changing so rapidly in so many ways that prediction has become a conceit.
http://www.igbp.net/news/pressreleases/pressreleases/planetarydashboardshowsgreataccelerationinhumanactivitysince1950.5.950c2fa1495db7081eb42.html

Thanks for the link, Mound. Everything has changed in the last 70 years. We spend our lives trying to catch up. We're not doing very well.