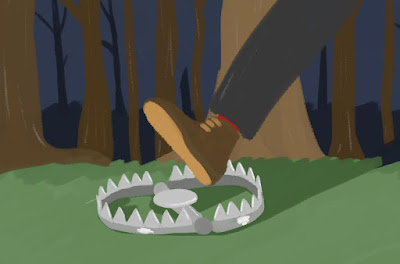 The United States Justice Department has been booby-trapped. Joyce Vance writes that it is full of ticking time bombs:

Attorney General Merrick Garland knew he’d inherit some ticking time bombs when he took charge of the Justice Department. What he didn’t know, apparently, until the New York Times reported it this month, was that one of them was this: Under the Trump administration, the department subpoenaed Apple for information that included accounts belonging to Democratic members of Congress and their staff and families, and concealed that fact from them for almost four years.

Like Richard Nixon, Trump had a long enemies list. But Trump went further than Nixon when it came to his attempts to destroy those people. His justice department sought information from Apple on two congressmen and gagged Apple from reporting the subpoenas:

The subpoenas just happened to home in on two opponents of President Donald Trump, Reps. Adam B. Schiff (D-Calif.) and Eric Swalwell (D-Calif.), and these or others also retrieved information about James B. Comey, the FBI director Trump fired, and Trump’s own White House Counsel Donald McGahn, rumored around that time to have been cooperating with the Mueller investigation. It’s also odd that a prosecutor from New Jersey, without much experience in leak investigations, was brought in by Attorney General William P. Barr in 2020 to resuscitate the probe, which hadn’t produced enough evidence to charge a crime in the three years since it began under Barr’s predecessor, Jeff Sessions.

Both Barr and Sessions claim to know nothing about the subpoenas. Garland has asked the department's Inspector General to investigate. You can bet that what he finds will stink -- as my mother used to say -- "to high heaven."

Some houseboy(s) too eager to do Trump's bidding will get trashed. That should take a few years - more than enough to get the man back in the chair or Ivanka in '24.

I was never sure of who was in charge when Trump was President. Trump kept all of us busy with nonsense while the nasty crew around him did dastardly things such as you posted. It was like watching a magic show constantly distracted and nobody seeing the wallet disappear.

Throughout his life, John, Trump has always expected that someone else would pick up the tab. He's working from a time-honoured playbook.

"Trump's role is to ensure that the media and the public attention are always concentrated on him. ... And in order to maintain public attention, you have to do something crazy. Otherwise nobody's going to pay attention to you. ... So every day there's one insane thing after another. ... But meanwhile he's onto something else, and you go to that one. And while this show is going on in public, in the background the wrecking crew is working."

Of course, this isn't first instance where Chomsky has pointed out the use of this tactic.

Chomsky became famous for explaining how consent is manufactured. John. Now he's returning to an old theme -- the utility of bread and circuses.