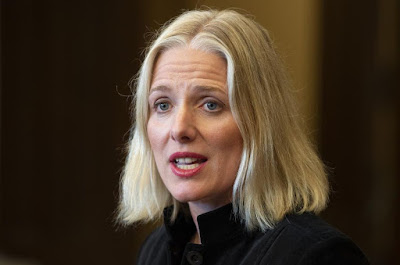 Catherine McKenna won't be running in the next federal election. Susan Delacourt writes that after the abuse she has endured, her decision is not surprising:

The woman who made her name as Justin Trudeau’s environment minister spoke in front of a pedestrian bridge built across the Rideau Canal during her tenure as MP for Ottawa Centre — an accomplishment of some local-riding pride, she said.

It’s called the “Flora Footbridge,” named after legendary Conservative politician Flora MacDonald, a trailblazer in politics for women such as McKenna.

The symbolism for this surprise announcement, then, couldn’t have been more perfect, with all the allusions to bridges built, between political parties and generations of women in elected office, right in the heart of the national capital.

As we know, though, real life in politics is rarely as lovely as the photo ops. So McKenna had to field a lot of questions on Monday that revolved around the price she paid for being a prominent feminist and climate-change advocate in Trudeau’s government.

Online abuse; disgusting graffiti defacing her constituency office; threats that resulted in the need for extra RCMP protection — all these punctuated her public life. As McKenna spoke, an RCMP officer hovered nearby, eyes surveying the small crowd taking in the open-air news conference.

McKenna was also unusual because of the way she balanced politics and family:

McKenna, in many ways, had more going for her as a woman in politics than Flora MacDonald did. She kicked off her career in cabinet with a declaration that she would go home every night to have dinner with her three children — a family-friendly policy that would not have been open to MacDonald or other women of her era. (MacDonald had no children, as was so often the case when women had to choose between career and family.)

McKenna also enjoyed more latitude to call out misogyny where she saw it. Long before she was sworn into a gender-balanced cabinet in 2015, previous women ministers were often told to keep their mouths shut, lest they be accused of “whining” or lacking the fortitude to compete in the rough-and-tumble world of politics.

But a person can only endure so much. It's never been easy to be a woman in politics. It still isn't easy.

Call me skeptical as I play the world's smallest violin ...

Methinks the CONs juvenile misogyny helped deflect from the truly sad situation McKenna found herself in: that the Trudeau climate policy is long on aspiration and short on action and the only pipelines they scorned are the little ones from your drink to your mouth.

McKenna now says she will "dedicate her professional life to fighting climate change"
Ooops.
We all thought that's what an enlightened Environment Minister should be doing.

I agree that Trudeau is more aspiration than action, PoV. Perhaps that had something to do with McKenna's departure.

I did notice that she is self confident enough to not worry about a gold plated pension.

As Carney waites in the wings….Carney will have to go through Christia though. Anyong

The lady has a Masters's degree from the London School of Economics and a law degree from McGill, rumley. She'll do alright.

Carney is her replacement at Environment -- or maybe Finance, Anyong. The succession plan is already in place.

The JWR/Bennet incident has strangely rendered this vesting topic unmentionable.
But since brave Sir Rumleyfips ventured forth above I am answering the call of duty.

"The lady has a Masters's degree from the London School of Economics and a law degree from McGill, rumley. She'll do alright".

I think her rewards are yet to come and with Carnie already making news in the Environmental headlines it seems to me a bit of backroom planning might be going on here.

I'm quite sure a succession plan is in place, zoombats.

We'll see, PoV. I could be wrong. But McKenna strikes me as someone who won't worship at that golden calf.