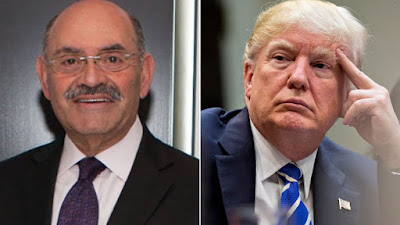 Today is the day. The Washington Post reports that:

Prosecutors in New York have given former president Donald Trump’s attorneys a deadline of Monday afternoon to make any final arguments as to why the Trump Organization should not face criminal charges over its financial dealings, according to two people familiar with the matter.

That deadline is a strong signal that Manhattan District Attorney Cyrus R. Vance Jr. (D) and New York Attorney General Letitia James (D) — now working together, after each has spent more than two years investigating Trump’s business — are considering criminal charges against the company as an entity.

The two people familiar with the deadline set for Trump’s attorneys spoke on the condition of anonymity to disclose private conversations. Under New York law, prosecutors may file charges against corporations in addition to individuals.

That's why Trump was in Ohio over the weekend, claiming yet again that he is a victim. But the walls are closing in:

In recent months, according to people familiar with the investigation, prosecutors began investigating Weisselberg’s personal finances, in the hopes that Weisselberg might be persuaded to offer testimony against his boss. But prosecutors have grown frustrated with what they see as a lack of cooperation from Weisselberg, according to a person familiar with the case. This month, Post reporters observed Weisselberg driving into work at Trump Tower — home to both Trump’s Manhattan apartment and his company’s headquarters office — on a day when Trump was staying at the tower.

Weisselberg apparently believes he can beat the wrap -- as does Trump. I suspect both men have been misinformed.

Email ThisBlogThis!Share to TwitterShare to FacebookShare to Pinterest
Labels: The Crumbling Trump Empire

Classic game of prisoner's dilemma, Owen. Do they both stay silent and minimize the damage, or does one rat out the other?

I note the glaring absence "Individual 1" on the above list of those facing charges. There's still plenty of room for Trump to skate away. Vance Jr has shown that he's not above taking bribes, sorry, "campaign contributions," in exchange for letting Trumps walk free.

The New York AG is also in on this business, Cap. Trump has skated away his whole life. But I suspect this time he's going to have a rough time.

I put my money on Trump for if he goes down then many other dodgy dealers could also suffer the same fate.
Dodgy deals are a way of life for billionaires and multi millionaires. ; they seldom reach those heights by working an extra shift of overtime!

True, TB. But sometimes it all comes down around their heads.

Two things about the investigation into the Trump Org: The story about the deadline was leaked by the Org's lawyers as a possible ploy to gain public sympathy among Trump supporters as surmised by lawyers such as Andrew Laufer and Bradley Moss on twitter. Apparently prosecutors give deadlines all the time to defence lawyer to come up with evidence/arguements as to why charges shouldn't proceed. The other is on CNN, former house impeachment manager Dan Goldman stated the charges facing the Trump Org at state level are not severe enough to convince Weisselberg to turn state's evidence and if convicted might not face jail time. What will happen is that if charges are laid, creditors to the Trump Org will call in their loans which will lead to the bankruptcy of the Trump Organization. In other words, hit him where it hurts in the pocket for now. As one wit said on social media, "No one does bankruptcy better than Trump."

I'm not sure anyone will go to jail, perfect. But Trump could go bankrupt. And, this time, no one will rescue him.

Ah, but some Russian oligarchs have invested with Trump in the past. If they see that Trump has future value to Russia and Putin, they'll come up with more backing.
Mennis the denace.

True, Dennis. But I suspect they've written him off and cut their losses.