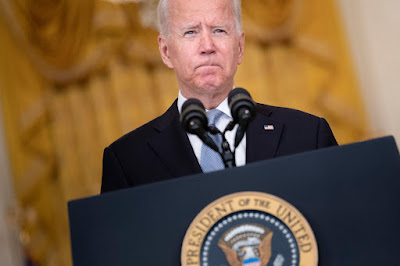 As he began, he sounded pugnacious if not angry. “I was not going to extend this forever war. And I was not going to extend a forever exit,” he said. He praised U.S. troops and diplomats who risked their lives to save more than 120,000 lives, impressing upon Americans the magnitude of the evacuation effort. For critics who point to thousands of Afghans who will live in misery, he explained that no country has done more to airlift allies to safety after losing a war. Regarding Americans still there, he argued there is “no deadline” to get them out. Getting those Americans out will be vital to retaining his credibility.

He then launched into a point-by-point rebuttal of his critics’ main claims. “Some say we should have started mass evacuations sooner, and couldn’t this have been done in a more orderly manner. I respectfully disagree.” The chaos would have started then, he argued. He also insisted that “there is no evacuation you can run at the end of a war without the complexities, challenges, threats we faced, none.” His concession that the projection for how long the Afghan government and military would be able to hold was “inaccurate” will go down as a world-class understatement.

Speaking to critics who argue the United States could’ve secured Afghanistan at low cost and low risk, he said, “I don’t think enough people understand how much we’ve asked of the one percent of this country who put that uniform on.” This was both Biden the president and Biden the father speaking. He understands how the war chewed through American lives and families for no discernible gain. “There is nothing low-grade or low-risk or low-cost about any war,” he said.

Americans don't like to lose a war. But, in the last fifty years, they have lost quite a few. Some Americans continue to believe that the greatest nation on earth simply can't lose a war. The most important thing that Biden said was that "the era of nation-building is over." That has been the central thrust of American foreign policy for over fifty years. And that is why the United States has got so much wrong.

Sometimes, it's really hard to hear -- and accept -- the truth

Email ThisBlogThis!Share to TwitterShare to FacebookShare to Pinterest
Labels: The American Withdrawal From Afghanistan

The era of nation building ended in 1952, after the end of the US and allied occupation of Germany and Japan. I don't think any other US occupation could be objectively described as nation building. Sure, Americans like to delude themselves about being a force for good, but that nonsense doesn't fly in any country that's been on the sharp end of the US military. The US should have pulled out of Afghanistan the minute Bush lost interest in Bin Laden and went after Saddam. The Taliban was never an external threat to anyone.

The last successful American military campaigns were the invasion of Grenada in 1983 and the invasion of Panama in 1989. Both of those go in the Pentagon's victory column.

American forces have won plenty of battles since then but those successes didn't translate into victories. This repeats the pattern set in Viet Nam where the US forces were never defeated in the field (Khe Sanh came close) but left in failure.

BBC's world service reported this morning that a top bin Laden aide has resurfaced in Afghanistan after laying low in Pakistan these past 20 years. It's said the locals cheered him heartily.

My guess is that war, in some form, will return to Afghanistan after a brief interval to allow a new cast of players to fill the power vacuum left by the American/ISAF withdrawal. China is itching to move in to stitch up Afghanistan's mineral resources (see what they've done in the Baloch territory of southern Pakistan) and extend a land route for its Belt and Road economic initiative. China's handling of its Uyghur Muslim population may have repercussions.

We're all familiar with Stalin's scorched earth policy to deny Nazi occupiers the ability to sustain themselves from Soviet territory. The Taliban are in an eerily similar situation. The nation they now must govern is destitute. ISIS is waging its own insurgency. Worst of all, climate change is blanketing the country in a multi-year drought and heatwaves that are leaving the country's 39 billion people with serious water and food insecurity. It's as though the Americans handed them the keys and said "here, good luck."

This might be all the incentive the West needs to make a clean break from the Middle East and South Asia regions. If we could simply switch to alternative, clean energy it could be a simple matter.

One book that left a lasting impression on me is Barbara Tuchman's The March of Folly, Mound. The march continues.

In light of this debacle and its parallels with Vietnam, it would be nice to think that the U.S. has learned a lesson when it comes to their meddling, Owen. However, I imagine their massive hubris prevents them from seeing this as a 'teachable moment'.

"The nation they now must govern is destitute."

This is part of our western mindset and the beginning of a new narrative about the backward Afghanis who ... just won't stop being the graveyard of empires.

oh, but there is hope!
https://www.counterpunch.org/2021/08/31/the-taliban-will-escape-pariah-status-by-posing-as-the-enemy-of-isis/

There is still a Puritan streak in American foreign policy, Cap. They believe it is their mission to bring democracy to the world.

Clearly, Lorne, Americans refuse to learn from history -- and they are doomed to repeat that history.

Are you referring to the article in the Guardian, PoV? The misery will continue.