No Need To Investigate? 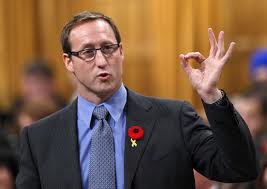 Peter MacKay argues that there is no need for further investigation of the Robocall affair. These were isolated incidents, he says. And, anyway, "It's certainly not something our party condones, it's inappropriate behaviour to say the least."

But Lawrence Martin provides a catalogue of Tory subversion, starting with their first victory and the In and Out Affair. He then provides a list of twenty-one other transgressions -- including Tony Clement's "border security" spending in his riding, smearing Richard Colvin over Afghan prisoner documents, and smearing Irwin Cotler by using the same telephone techniques employed in the last election.

After awhile, things become painfully obvious. MacKay's claim that there is no need to  further investigate the Robocall affair is akin to saying the coming of Spring is an isolated incident.
Posted by Owen Gray at 8:46 am

nothing to see here...just keep moving, gas is $1.30ish in the GTA, talk about that.

The rising cost of gas has to do with Iran, Gordie, not rising demand. Harper has been stoking concern about an attack on that country.

It's part of the same pattern. He does what he does because he thinks he can do it without impunity.

Gordie, were you being sarcastic? I hope you're not as shameless and scuzzy as Peter MacKay.

Read the comments under the CBC report about MacKay's blithering. Pretty good stuff.

The rising cost of gas has almost nothing to do with Iran. Do we get any of our oil from Iran? Does the US?

The rising cost of gas has to do with speculators with enough financial clout to move markets. Iran announced that it would halt shipments of oil to Britain and France. Then speculators took advantage of fear to run up the market, even though Britain and France hadn't actually been buying Iranian oil for some time anyways.

Rising oil prices have killed enough demand in the US that they're now a net exporter of gasoline, but the prices keep on rising.

It is worth remembering that Mr. Harper was very much in favour of joining the "coalition of the willing."

History has proved that his vaunted intelligence is not all it's cracked up to be.

I'm not sure if Gordie was serious or ironic, thwap.

I recently read something about oil prices (and speculators, and Iran, and other stuff... not necessarily in that order) here:http://crooksandliars.com/karoli/rove-and-hannitys-barely-concealed-glee-ove

I suspect that ultimately the reason for rising prices has to do with supply (as well as, of course, demand).

Thomas Homer-Dixon wrote an article about this fossil fuel issue recently (and has written and talked about it for some time): http://www.theglobeandmail.com/news/opinions/opinion/our-peak-oil-premium/article2321815/

The article talks about Iran, and supply, and demand... It also points to some of its sources of information, which one could look into. (I always recommend looking into authors's sources, especially if you feel that something sounds "fishy" [no offense to actual fish intended], or if you very much disagree with what you read, or if you very much agree with what you read.

The world has an energy supply+demand problem. We want and need more and more energy. Billions of people are in countries like India and China that are rapidly developing, and rapidly requiring (and demanding... and being able to pay for) energy. Fossil fuels have been and will continue to be an important source of energy. But even without paying any attention to the climate crisis, we need to pay attention to this energy problem. Doing nothing to expand other sources of energy (and doing everything to stoke concerns about Iran) will only drive prices of fossil fuels up.

I wonder who could possibly benefit from that...

I agree that, in the long run, prices will rise because of the supply/demand imbalance.

But, given the slow economy -- and the noises coming from other countries -- the worry over reaction to Iran's nuclear program is behind the present oil price spike.

The simple truth is that, when Mr. Harper makes statements about Iran using nuclear weapons, he contributes to the rising price of oil.

Or he contributes to the rising price of oil insofar as it increases (or decreases) due to speculation, rather than supply/demand.

Of course... I must admit that when it comes to this issue I am... speculating. But not in a financial way.
-mg

I'm not going into the price of gas but want to affirm that nothing Peter MacKay has to say has any relevance to an ethical government.

The "Conservative" Party is a coalition created by lies, deceit and betrayal.

Remember?
MacKay SIGNED a deal with David Orchard promising no joint candidates with the Alliance party and to rebuild the PC party! It wasn't months before MacKay violated the deal and signed a merger agreement with Harper. I blame MacKay directly for the Reformatories we have in government today.

You must remember that oil has always been central to Stephen Harper's existence.

I agree that Peter MacKay has a lot to answer for, Anon. The merger left Progressive Conservatives out in the cold.