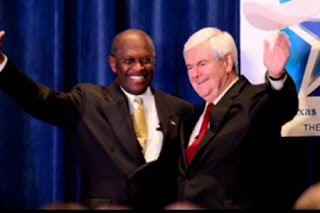 Richard Cohen writes this morning that Herman Cain's endorsement of Newt Gingrich is proof positive that the Grand Old Party is brain dead:

It’s hard to know who is the more ridiculous figure — the grandiloquent, bombastic and compulsively dishonest Gingrich, or the beguilingly ignorant Cain, a man who has never held elective office and who was reduced to speechlessness when asked a question about Libya. Nonetheless, Gingrich, his Alfred E. Neuman grin on his face, accepted the endorsement and then went on with his nihilistic campaign for the White House. This has been an exceedingly silly political season.


In fact, the Republicans have become the silly party, precisely because they cannot accept the concept of nuance:

If you ask me what I think of abortion, I’d say, “It depends.” It depends on whether you’re talking about the ninth month of pregnancy, the first, the health of the mother, the fetus — or, even, the morning-after pill. But in the Republican contest, the answer to the question is always the same: no, no and no again. Thanks for giving the matter such careful thought.

It is the same with taxes. Should they be raised? It depends. It depends on economic and fiscal conditions — and on whose taxes will be raised and by how much. The answer cannot be “No, never.” That’s not an economic position; it is an ideological one and exhibits a closed mind.


And so it is with all issues -- global warming, the Iranian nuclear problem, relations with China. The answers are all simple. The problem is that the world isn't. And the Republican Establishment -- if it still exists -- has not had the courage to bring this to the party's the attention. For too long, Cohen writes, the movers and shakers in the party have

been mute in the face of a belligerent anti-intellectualism, pretending that knowledge and experience do not matter and that Washington is a condition and not a mere city.


They are now reaping the harvest of their neglect.

The Republicans painted themselves deep into a corner during George "the Baby" Bush's presidency. While they won the hearts of the far right, making it an important ally to the party's electoral success, they have continued paying for that success by always honouring the views of the far right, regardless of how simple-minded those views are.
To rein in the silliness, it may take a very strong Republican Presidential candidate, one who's not afraid to cut through what has to be intellectual cynicism and begin speaking the truth.

It's easy to forget, Gertrude, that the Republican Party was the party of Abraham Lincoln and Teddy Roosevelt -- both men of extraordinary vision and sympathy for ordinary citizens.

It would be nice to know that there is a Lincoln or a Roosevelt in the Republicans' future.

But one has to wonder if -- at least as they are presently constituted -- they would have the wisdom to choose such a person as their presidential candidate.

But, of course, the modern republican party is a reflection of a large portion of the public in the US, and that public is frighteningly ignorant of almost everything. And, what is worse, they are not just ignorant, but they are wilfully and actively ignorant (as you have recently pointed out), and they actually oppose knowledge and see meaningful debate and education as an enemy. (A real parallel to the Harper government) They support an ideology of "know-nothingism"

As for Lincoln and Roosevelt, I don't think the comparison is germaine. For one thing, the growth of the two parties in the US is complex because the democrats grew out of the Jeffersonian group in the very early days of the Republic. But the Jeffersonians were about decentralization and state's rights as against the Federalists who really wanted to recreate the system of British centralization and were even in favor of a real American aristocracy. But those ideologies shifted as progressives began to see the government as a vehicle not just for tyranny but for helping average people. (In other words they began to catch up with Thomas Paine!) Meanwhile the growth of the Republican party was complex because it was, in its pro-capitalist and pro-elitist stance, an extension of the Federalists but because the growth of the Federal government was becoming more progressive and more interested in social welfare, they took on the position of states' rights.

As a result of these machinations, Lincoln stands somewhere in that middle ground between progressives of the 18th century and conservatives of the 20th.

As for Teddy Roosevelt, he really was an old B**tard and a dreadful colonialist and despite his support for the American Progressive Party, I do not believe we should dignify him as a man of vision.

I grew up in the states and left in 1990 because I saw that it was degrading as a nation into a cyber-punk world of chaos and ugliness, like the vision of Bladerunner. The only hope for the US is that the progressive parts of the nation split from those parts that are stuck in the past.

I agree, Kirby that -- on some issues -- the Democrats and the Republicans have switched positions. Now one party stands for what the other used to stand for.

And while there was an ugly side to Roosevelt -- he began the expansion of what came to be known as the "American Empire" -- he was also a trust buster and, in some ways, a progressive.

My point is that the Republican Party used to embody some noble ideals. Those ideals have no place in the modern party.