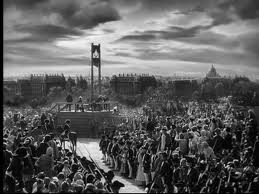 Both Jeffrey Simpson and Chantal Hebert wrote this week about what is happening in Alberta and Ontario. Simpson captured the Dickensian contrast quite accurately:

Alberta’s government will get bigger in spending and personnel; Mr. Drummond said Ontario’s must shrink. Alberta is heading for big surpluses, Ontario for large deficits – $30-billion in 2017-2018, Mr. Drummond reckons, if nothing is done. Alberta has no provincial debt; Ontario’s debt has reached a ratio of 35 per cent of the provincial economy and is going higher. Alberta has the highest bond rating; Moody’s Investor Service just knocked down Ontario’s from stable to negative.


But it's Tom Walkom who actually got down to cases. If Dalton McGuinty makes the cuts Drummond is recommending, people will be thrown out of work:

Rough calculations, based on his figures and finance department estimates, suggest that the Drummond plan will end up throwing roughly 250,000 additional Ontarians out of work by 2018. Even without another global crisis, that translates into an unemployment rate of about 11 per cent.


That's the problem with implementing austerity in tough economic times. When people are unemployed, government tax receipts go down -- and deficits go up.

This is not the first time it has been the best of times for Alberta and the worst of times for Eastern Canada. Back in the seventies, after the Arabs raised the price of oil, interest rates spiked along with oil prices. Eastern Canada was thrown into an economic funk. In an effort to share the pain, the Trudeau government introduced the National Energy Program. To this day, the phrase infuriates Stephen Harper.

The problem with the NEP was that it was imposed shared sacrifice. And its failure has made any mention of shared sacrifice suspect. But that is exactly what is required now.

We know where Stephen Harper stands on the issue. He is concentrating on selling oil to the Chinese. Yet he said nothing when Caterpillar moved its locomotive operations to Indiana at the end of January. However, if unemployment in Ontario spikes, so does the federal deficit. The prime minister from Alberta cannot afford to neglect Ontario.
Posted by Owen Gray at 8:52 am

Email ThisBlogThis!Share to TwitterShare to FacebookShare to Pinterest
Labels: Best of Times, Worst of Times

The Alberta government is running true to form dreaming about mega-billion dollar surpluses into the distant future. That is anything but assured if we're going to salvage something of our planet. We now know that staying within the 2C warming target necessitates leaving almost four-fifths of known fossil fuel reserves in the ground, untapped.

What that means, Owen, is that we're approaching a "carbon bubble." Fossil fuel assets have been assessed as sub-prime, about as dodgy as American home mortgages in 2007. Once the investment community reacts to that, and it will, world oil prices will plummet and so will the fortunes of the world's filthiest and most costly fossil fuel, Athabasca bitumen.

At that point Albertans do as they've always done in cyclical busts - they toss the keys to their McMansions on their banker's desk, let their monster trucks get repo'd and move back into the old mobile home.

Then they buy bumper stickers that read, "Dear Lord, let us have one more boom and we promise, next time, we won't piss it away."

If this carbon bubble bursts world oil prices will be in the toilet for good. Unconventional oil won't stand a chance competing against much less costly conventional reserves. Prices could actually drop artificially to stimulate consumption and demand.

I suspect this is why Harper has such a tent in his pants to churn out as much bitumen as he can before the door slams shut.

My wife and I and two of our young children were in Alberta when the last bust occurred, Mound.

Luckily, we were renters. But we remember the trail of license plates heading back east as we drove back home.

I read your recent post on the carbon bubble. Perhaps that's why Harper is so insistent about selling oil to the Chinese.

Whatever the reason, his strategy does not suggest that he is a good economist.

I have been waiting years for an Ontario premier to have the courage to remind the federal government that Ontario is still the place that Canada goes to get most of its money.

And such will finally be the case. But don't expect Stephen Harper -- who grew up here -- to be very sympathetic.

Remember, he calls Calgary his "home town." He's spent his adult life running away from his past -- particularly his youthful admiration for Pierre Trudeau.