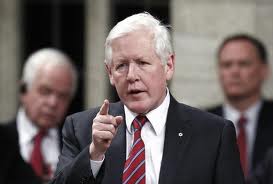 Bob Rae stood up in the House yesterday to announce that one of the members of the Liberal research staff -- Adam Carroll -- was responsible for the Twitter account which savaged Public Safety Minister Vic Toews:

"I want to offer to the minister my personal apology to him," Rae said. "Matters of personal and private conduct are not to be the subject of political attack or political rhetoric."


Rae's apology should be set against the Conservative response to Speaker Andrew Scheer's ruling that  robocalls which spread misleading information about Irwin Cotler -- the callers claimed that Cotler's retirement was imminent -- was "reprehensible"  behaviour.  Peter Van Loan stood up in the House and claimed that the callers were merely practicing their right to "free speech."

The differences couldn't be more stark. And, therefore, the prime minister's strategy to simply deny any party involvement in the widening scandal is not at all surprising. He and his party live in an alternate moral universe. They  -- as Mr. Toews tirade about opposition to his surveillance bill attests -- see themselves on the side of righteousness. It's "the others" who are on the side of Satan.

It is up to the opposition parties to hold the government to account. The Harper Party never admits a mistake.
Posted by Owen Gray at 8:44 am

I suspect that the sad irony of this story is that this concern to act (and be seen to be acting) ethically is precisely why the Harpercons have a majority and the Liberals have so few seats. I have never been a Liberal but I always respected Martin for being an upright guy and calling the Gomery Inquiry. Unfortunately it was, in part, calling the inquiry that lost them the election and Harper's strategy of absolute denial of everything and riding out scandals no matter how bad they are, seems to work remarkably effectively, particularly when you have the support of 90% of the media. As I have said, my feeling is that this mood has changed somewhat and my hope is that people will start to have some respect for some a more honest and direct approach but in the past little while deceit has been more effective than honesty.

Martin did the right thing and paid for it, Kirby. Harper learned that lesson and has profited from it.

And, to date, he has profited from the fact that Canadians have cared more about their wallets than their rights.

One hopes that the knowledge that they have been cheated -- ethically as well as financially -- is beginning to set in.