A Vote For Plutocracy 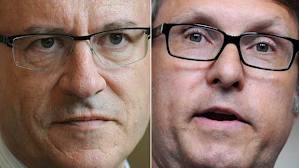 In a split decision, the Supreme Court today upheld Ted Opitz' win in Etobicoke Centre. The court reinstated 59 of the 79 votes that Justice Thomas Lederer threw out, reasoning that the only invalid votes were "instances where there was no voter's signature on the registration certificate. The signature is supposed to be the voter's statutory declaration that he or she is over 18 and a Canadian citizen."

Chief Justice Beverley McLaughlin was in the minority, who would have discarded 65 of the 79 ballots. The majority on the court held that the discrepancies were merely clerical errors. There was no attempt, they said, to manipulate the vote.

So the Conservative juggernaut continues. What is abundantly clear -- both here and in the United States -- is that there is no majority support for the conservative agenda. That is why, in the U.S. there has been a concerted effort to deny the poor and people of colour access to the voting both. That is why Mitt Romney now claims he is a moderate -- until after the election. And that is why Conservatives misdirected voters to the wrong polls in the last election.

Today's ruling does nothing to change any of these things.
Posted by Owen Gray at 11:53 am

Either that or we resist this idiotic, partisan bullshit.

If nothing else, thwap, the last eighteen months have shown us how the Conservatives have played the system.

To be forewarned is to be forearmed.

But will what comes after the last 18 months be enough to wake the Canadian Electorate out of the hypnotic Canada's economic action plan stupor?

A good question, waterboy. Being forearmed does not imply that one is willing to go into battle.