Honey, I Abandoned The Kids 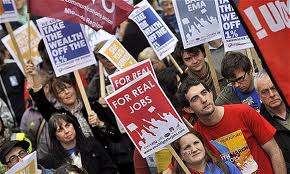 Judith Maxwell, former chair of the Economic Council of Canada, tells the Globe and Mail: “People over their forties in Canada have no idea what it’s like for a young person trying to find a pathway to adulthood right now.”

Our present political masters, focused entirely on the next quarter's results, have not given any thought to the next generation:

While young people have always struggled to get established, economists and labour experts say this time is different. Those in their 20s today are facing far more hurdles than their parents’ generation, and those difficulties are likely to linger, with profound economic consequences for Canada. There is diminished job security, the growth of temp work, rising costs for food, tuition and housing and record debt levels. To top it off, young people entering the work force today are far less likely to retire with a company pension than their parents’ generation.

The different playing field for young people today can be measured in a number of ways. One is the decline of secure jobs: The proportion of 20- to 24-year-olds in temporary positions has climbed steadily, to about 29 per cent this year from 21 per cent in 1997, Statistics Canada data show.

Full-time work is harder to find as well. Last month, a broader measure of youth unemployment – which includes not only the jobless, but part-timers who would prefer full-time work and people who’ve given up looking for work – hit 19.6 per cent, the highest level for any September in 15 years.


Today's young have been abandoned by their governments. Our leaders tell us they are focused on the future -- that is why they are cutting spending.  And, all the while, certain that their own retirements are secure, they toss the young under the bus.

You and I, Owen, have known a much different Canada, the country that was bequeathed to us by our fathers, grandfathers and great grandfathers. Whether it was immigrating to a new country and clearing land for a farm, world wars or the Great Depression, they endured hardships we, today, can't imagine.

Maybe because we were spared their ordeals, we became much too self-interested and much less conscious of the need to prepare a proper place for those to follow us.

Several years ago Bill Moyers did a magnificent, multi-part documentary exploring the demise of posterity in American society and governance. It was, to me, the best work he's ever done and a true eye-opener.

He showed the role played by posterity in generations that preceded ours in daily life and in planning for the future. You must truly want to leave a better world for your descendants if you're to have any chance of doing that.

The Boomers treated posterity as a quaint notion but a drag on their immediate prosperity, an obstacle to the Holy Grail of maximized production and consumption.

I think of Teddy Roosevelt's "Square Deal" speech of 1910 and the powerful way he defended the need for posterity.

Now, although it may be too late, even The Economist is calling for "radical centrism" in the form of a Rooseveltian revolution (referring, I believe to Franklin, not Teddy). Perhaps they meant both, a New/Square Deal.

But to achieve what The Economist champions requires a tide change in attitudes and a resolve to go straight through today's existing political establishment, Liberal and Conservative, and, quite possibly, NDP also.

Had they a shred of wisdom our political classes would recognize the need for wholesale reform and implement it if only because it is inevitable and they run the risk of chaos if reform has to be seized from them.

I agree, Mound. We boomers have been absolute narcissists.

Greece has become a dirty word these days. We have rejected that nation's myths as quaint and outdated. We refuse to acknowledge that we are drowning our young. But there's more to it than that.

I agree the kids of today have been abandoned. What do they have to look forward to but the crisis created by us and the governments before them. I speak with my young relatives and tell them to educate themselves. They are trying, but the costs as well as living day to day is becoming more and more difficult to do, if at all. Jobs are part time, casual, low wage, no benefit positions. It's a race to the bottom brought on by governments and big business imo. There is more than enough, but some want it all. Some want others to have nothing and live in despair. For what? The current regimes and that's what they are imo, disgust me. Wake up young ones and pay attention. What do you want from life? Get out and vote, raise your voices, be heard. Enough is enough.

The young have a tough row to hoe, Anon. They are the ones who are really paying for this race to the bottom.

One hopes that they will learn the wisdom of organized opposition.

But that doesn't let us baby boomers off the hook. If we have any integrity, we will organize in their favour.

The political builders of small boats into the future
have always provided space for their own offspring
I am not seeing any attitude difference between now and 60 years ago
There is a resource difference
and a practicality difference
(18 years of computer skills and the mall leave you pretty handicapped)
I am not arguing that things are not tragic for our youth
nor am i promoting the boomers "narcissism"
What i am arguing is some romantic notion that the nature of people and posterity was any different... ever
Throwing people under a bus is the game...those that do are called winners

True, lungta. All kinds of people are thrown under the bus in a winner-take-all society.

The problem with throwing the young under the bus, however, is that you consume your seed corn.

You obliterate the future.

Lungta seems unaware of the very real and critical role posterity played in the creation of Canada and the U.S. for that matter.

Posterity was never a "romantic notion" but common sense. Posterity is an integral part of progressivism. It lay at the core of Teddy Roosevelt's "Square Deal" and FDR's "New Deal."

People once took immense pride in building rather than owning and consuming. It is the glue that binds great societies and their highest achievements. We're now paying the price for ignoring that for the past four decades.

"The problem with throwing the young under the bus, however, is that you consume your seed corn."

Precisely. There will be consequences, and the Ancien Regime doesn't see them coming.

The concept of posterity, Mound, rested on the firm conviction that we have an obligation to future generations.

Teddy Roosevelt's support for national parks and conservation in general was a prime example of that conviction.

For the last forty years we have gone blissfully on our way -- without a thought for those who come after us.

Just as they didn't foresee the Great Recession or the loss of the Security Council seat, Ed.

Despite their claims of expertise, they're really not a very bright bunch.

I have four kids (the oldest 24 and the youngest 8) and I (and they) are amazed by the lack of knowledge and awareness of their peers. It seems to me that an inordinate number of the so-called "millennium" generation have been unknowingly swayed by the neo-conservative attack on the political system which has generated the idea that the political system, unions, etc, are a waste of time. And so far too many young people are disassociated from the structure that actually wields power over them. One might even say, a la Marx, that they are the supreme victims of reification and they don't even see the power structure as a relationship between people but only a mechanism of interacting "things." To use a French (Situationist style metaphor) they become little more than disassociated, bodiless souls who float in the virtual spectacle believing that the ersatz power of texting or consulting Wikipedia at a café is actual power and they are blinded to the real power that operates behind the spectacle.

The new technology makes it easy to become disassociated from the power structure, Kirby.

And those who wield power can use that technology to disseminate ignorance -- as, for instance, is the case with the campaign of the Koch brothers and others to cast doubt on the science of global warming.

Having said that, what we saw in Quebec last summer was a generation which felt it had consistently been given the short end of the stick. If those young people follow the example of Howard Beale, they will throw out their present masters.

Jean Charest made a quick exit a short time ago.

I understand KC's point about the millennials and it is said to be a powerful component in the malaise currently besetting Europe's youth and transforming them into the "Dangerous Generation." It is their disconnect that can draw them to charismatic extremists that can inflame existing frustrations and harness it to their cause. Greece is wrestling with this very situation today. If we can't leave hope and opportunity for them, what choice do they have?

The 30's provide myriad lessons about what can happen when demagogues harness the energy of the young and direct it towards those the powerful have deemed to be scapegoats, Mound.

As the situation in Greece suggests, we are at a watershed moment.