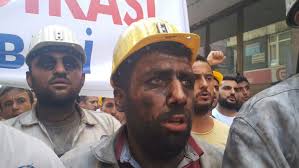 Two days ago, as Donald Trump signed an executive order to roll back Barack Obama's environmental legacy, he was surrounded by coal miners. “Come on, fellas,” Trump said. “You know what this is? You know what it says, right? You’re going back to work.” It was all part of the con.  E. J. Dionne writes:

Trump already signaled his indifference to the lives of his working-class supporters by backing the failed House Republican health care bill. It would have deprived 24 million Americans of health insurance. And the administration’s next big priority is corporate tax cuts, not an issue high on voters’ wish lists in Erie, Pennsylvania, or Bay County, Michigan.

Then again, not many proletarians hang around at the Trump resorts and golf courses where our commander in chief has already spent nearly a third of his time in office.


It is a con being played on the country's most vulnerable citizens:

We are living in a society where the long-standing injustices of racial discrimination against African-Americans and Latinos are compounded by the injuries of class. These afflict all lower income groups, but they are currently hitting white Americans particularly hard.


The painful truth is that the coal mining jobs Trump promised are not coming back. They have been replaced by automation, natural gas and renewable energy sources. Those who surrounded Trump were being conned -- arrogantly -- and in public.

Trump came to office by stoking their legitimate economic anxiety. But he sold them a lie. And, as they discover that lie, their anger will be frightening to behold.

Email ThisBlogThis!Share to TwitterShare to FacebookShare to Pinterest
Labels: Conning The Desperate

The idea that American jobs depend on more fouling of the air and water is ludicrous on its face. What good are the jobs if the air you breathe and the water you drink sickens and kills you and your family?

And in other news, I see that the world's largest coal producer is set to emerge from bankruptcy protection. A last-minute sweetheart deal with the U.S. Department of Justice seems to have hastened the process. What a surprise!

I expect Peabody back in bankruptcy eventually since none of this changes the underlying economics of coal, which is being driven out of the energy market by much cheaper wind and solar power. The building of new coal plants has declined by 2/3rds and the coal industry is in freefall.

It's worth remembering, Cap, that the president has declared bankruptcy four times.

I feel badly Owen for those people who believed Trump, when he said he would get them jobs.They just want to work.

Trumps blatent lies to them about him getting them those jobs is truly appalling."It is a con being played on the country's most vulnerable citizens."

I have found for a long time now, that how a person treats vulnerable people, will tell you everything you need to know about them.The same can be said about governments.

How we treat the least among us defines who we are, Pam.

There's also a fair amount to be learned by observing how the vulnerable respond to those who reach out to them.

By and large they aren't at all pleased by those who try to tell them the truth and they adore those who ladle out the snake oil cure alls.

Con men have known for a long time, Dana, that you shouldn't tell people the truth. You should tell them what they want to hear.

So on that note then I would ask what purpose or value there is in reaching out to these vulnerable people in any fashion other than insincere and dishonest?

I heard Frank Rich of New York Magazine make the same argument the other day, Dana. I'm not sure I have a good answer -- except to give you an old teacher's advice. Your job is not to just teach the brilliant. It's to try and teach everyone, knowing that it's never easy.

"Trump came to office by stoking their legitimate economic anxiety. But he sold them a lie. And, as they discover that lie, their anger will be frightening to behold."

My God you are such an ignoramus. Trump killed the TPP. After bribe-taking fake liberals have done nothing but betray workers for 25 years are you seriously going suggest workers are going to turn on Trump for killing free trade globalization? Because the jobs are not coming back according to your fake technocrats? Christ.

You think Trump supporters are stupid? Well at least they support something. You support nothing and have supported nothing your entire vacuous baby-boomer life.

I have to chuckle at people believing Trump is just a pure con artist.

No, the man just doesn't have a clue about anything. He imagines that signing some worthless piece of paper is all that there is to having an immediate change.

He knows less than zero about the Keystone XL pipeline, for example. Look at what he said after granting Transcanada rights to crossing the border: "When does construction begin?" as if it were all going to happen the next day, that there never was any opposition. The same with coal-miners on parade: "look happy, you're going back to work" or words to that effect. Right. Never heard of the alternative energy industry because he pays zero attention to things his brilliant mind isn't interested in. One giant dumb f*ck. Because he cannot read, and wasting time learning anything would cut into golf time when everyone just knows governing's all easy, no brain required.

I suppose the conspiracy theorists think he's just conning everyone! Nah, the man is so pure blind dumb and unread, he hasn't a clue about hearings, due process, etc. etc. never dealt with it in business life, never paid attention to government procedures because it held no interest for him in any of it, and thus believes it's all of no consequence or relevance. Probably hasn't read a book - ever. Just pure Yankee dumbness.

And Kevin O'Leary is about the same. Rules? What rules? Has zero clue about constitutional matters, and assumes his wonderfulness in disregarding anything he knows nothing about is just a minor impediment to the fulsome expression of his greatness. Another dumb f*ck from Yankeeland, equipped with no more than a giant helping of over self-confidence who figures that bulldozing things out of the way is all that's required.

And of course, the amazing thing is that the giant conservative dumb section of the public is no better informed, and believe these bull roars from idiots who are about as bright and well-read as they are. Which is to say, completely uninformed. And proud of it.

Not that the vast middle of the public is any better overall - they just let Trudeau trample everything, while the man himself is incapable of uttering complete sentences not filled with ums and ahs. They just trust the man, as anyone who meets the average citizen every day can attest. They think he's great and pay no attention to contrarian news - too much bother in their daily routine. So the Liberals will sell off our birthrights to their pals on the cheap to pay for whatever Morneau thinks it is he's up to - his defence of the budget on various radio and TV programs was rancid BS. Serving the masters' thoughts as usual as per that finance advisory committe set up over a year ago, which everyone seems to have forgotten about. You know, the one where members of the establishment get paid a dollar a year and all the parliamentary cafeteria food they can swallow to run the country.

We thus get what we deserve. Incompetence and/or arrogance, take your pick.

But on the other hand Owen you must see him as a modern day William Wallace. Just look at the freedom he is bringing to the internet. Who can complain about him giving the highest bidder complete transparacy of your browsing habits. Next up he is going to free the net from neutrality.

You've gone from just plain Anonymous to MAGA to BBS. But your style, your tone and your arguments always give you away. Too much time on your hands and and too much bitterness on your brain. Goodbye -- again.

Our privacy is for sale, Steve. For Trump, everything has its price.

Thanks for the link. It's still true, BM. We get what we deserve. It's a hard lesson to learn -- and it, unfortunately, takes a lot of pain to learn it.