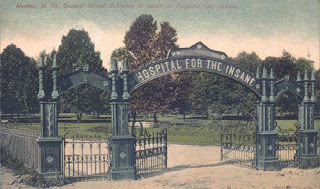 Over the weekend, Bergen Record columnist Mike Kelly asked Conway point blank, “Do you know whether Trump Tower was wiretapped?”

Conway’s response: “What I can say is there are many ways to surveil each other now, unfortunately. . . . There was an article this week that talked about how you can surveil someone through their phones, through their — certainly through their television sets, any number of different ways. And microwaves that turn into cameras, et cetera.”


Trump's budget director Mick Mulvaney has agreed with Trump -- until now -- that  you can't trust the information published by the Bureau of Labour Statistics:

The Bureau of Labor Statistics has been calculating the unemployment rate the same way since 1940. But Mulvaney nevertheless supports the theories of his tinfoil-hat-wearing boss, who throughout the presidential campaign called the unemployment rate a “hoax” and “totally fiction.” Most recently Trump relayed through his press secretary that the jobs report “may have been phony in the past, but it’s very real now.”


Trump's EPA Administrator, Scott Pruitt "suggested that — despite the overwhelming scientific consensus — carbon dioxide may not be a “primary contributor” to climate change." Trump appointee Curtis Ellis, who works in the Labour Department, " previously argued that Democrats were engaged in “ethnic cleansing” of working-class whites." And Sid Bowdidge " the massage therapist with no relevant experience. . . landed a job as a political appointee at the Energy Department, despite tweeting that Muslims ought to be exterminated and Obama was related to radical Islamist terrorists."

Like their boss, The Great Orange Id, they're all lunatics.

Image: Opacity.us
Posted by Owen Gray at 9:04 am

Every admin has a handgernade to hand over to the new boss. For Trump it was Obamacare and he pulled the pin and jumped on it. The explosion will be devestating. Its imoral by any measure to not have healthcare.

Strange, isn't it,Owen, that a country that once provided inspiration to the world is now a source of mockery and widespread despair? Americans have only themselves to blame for this sad state of affairs.

I agree, Lorne. It's a mystery to me why Americans didn't see from the beginning that Mr. Trump is a fraud.

As I read this, Owen, I began to wonder how any government so detached from the anchor of reality could possibly resist a continuous descent into authoritarianism. As a regime operates on belief rather than evidence and fact it operates on faith, akin to a religion and haven't there been some pretty dark iterations of those? As an operating system, belief must be propped up by some level of suspension of disbelief, a willingness, coercion or compulsion to acquiesce. Reality, unlike belief or faith, never goes away and as one moves further away from reality that becomes ever more obvious. It begins as an exercise in driving a square peg into a round hole only with an ever larger hammer of authoritarianism. The longer it persists the greater and more destructive the decline.

You've hit upon the central question, Mound. How long will the Trump administration be allowed to continue? It gets more corrosive with each passing day.

The last administration that dealt with reality was the Carter. The mailase speech changed the world.

And it led to Carter's defeat, Steve.

Liberals think the idea that deep state spooks can spy on anyone through any device connected to the internet that has a camera or mic connected is hilarious. They think: what will these tinfoil kooks think of next!

Of course a little bit of research shows this is exactly what IA Thought Police have been doing: i.e., the Vault 7 and Snowden leaks which show Obama created an Orwellian surveillance state.

The difference between Obama and Nixon? Obama could've spied on his political enemies and it would've only been a crime to reveal an executive-order wiretap existed!

Liberals once pretended they supported democracy and a just society. But every step along the way – including voting in the disastrous neoliberal era – they have supported establishment narratives, looting and tyranny.

"The basic problem with Trumpcare, Steve, is that the bill sees healthcare as a privilege, not a right."

How is that any different than Obamacare which left 30-million uninsured out of an original 50-million and did nothing to prevent people being gouged by insurance companies?

Certainly both are Republican healthcare plans. It only gets confusing if you are a liberal who, by definition, hates Republicans and has to pick through the garbage to determine which right-wing policies you now love (which you hated in the past) and which policies you are still supposed to hate (before they make it in the next Democrat/Liberal platform.)

I won't deny that Obama supported neo-liberal policies, MAGA. But the surveillance state was created long before he took office. And he can't personally order that his foes be watched. If Nixon accomplished anything, it was that he put the kibosh on that. Like Trump, you're accusing Obama of something that is now forbidden by law.

The difference, MAGA, is that 20 million people were covered who had not been covered. You're setting up a false equivalence -- and you're assuming that the Democratic Republican divide is binary choice.

It's true that Obamacare was essentially Romney's version of healthcare -- something Romney had to run away from when he ran for president. Obama went the Romney route because he knew he could never get single payer through Congress.

He was trying to break the binary nature of modern American politics.

Obama sure did a lot of nothing over his 8 years. But not expanding the surveillance state (and merely accepting the corruption) was not another sweet nothing. Not only did he expand the SS, he is furious with Snowden for exposing him and it.

If Obama did tap Trump, it would've been under the 'Russian mole' narrative:

"As for the genesis of a possible wiretap, it is possible the president was referring to the Foreign Intelligence Surveillance Act, a 1978 law that permits investigators, with a warrant, to collect the communications of someone they suspect of being an agent of a foreign power. That can include foreign ambassadors or other foreign officials who operate in the U.S. whose communications are monitored as a matter of routine for counter-intelligence purposes." (The Star.)

Obama won a super-majority in 2008. Could've done anything he wanted to. Promised the public option on healthcare. This allows people to buy into the government Medicare program. Compete with leeching private health insurance companies. It's no surprise this ended up in his Nothingness file. The HCII is going to pay Obama big time in speeches for killing the public option. Just like they did the Clintons for killing single payer.

Like the Clintons, Obama was using the threat of public policy to leverage money from the HCII: pay me to make me go away. (Bill also had a super-majority which he also quickly dispensed with.)

Like promising to end the wars (for which Obomba won a Nobel Peace Prize) and, instead, spreading war and terrorism across the Middle East, he didn't do this for nothing. He will get paid handsomely for all the big nothings he contributed to the world in speaking fees (aka 'soft corruption'; aka promissory bribes; the $1.4-million for the peace prize will be chump change in comparison… Like Bill, Barack will take in over $100-million in payola.)

That's why I like Trump. He's a billionaire. He doesn't need speaking fee chump change delivered in increments of $300k. That's a lot of work by his standards! He'll make more than that on POTUS merchandizing alone! LOL.

When I read your comments, MAGA, I get the impression you have your tongue in your check. Having fun?

I'm sure we would all prefer to "believe" that MAGA has his/her tongue in cheek.

MAGA.
You don't yet get it do you?
There is little to no difference between the USA versions of right and left wing, Republican vs Democrat, vs Conservative vs Tea Party etc etc!!
You are fighting a fight that does not exist.
You are looking for winners and losers.
You should be looking for right vs wrong, good vs bad.
You look for the childish vs adult.
Time to grow up.