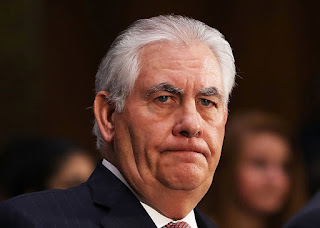 Rex Tillerson recently told the Journal Review, "“I didn’t want this job, I didn’t seek this job,” but he took it because "“my wife told me I’m supposed to do this.” He may be having second thoughts. Certainly others are. Jonathan Freedland writes that Tillerson's remarks could be read as:

a coded admission that he knows he is not qualified to be secretary of state, that he’s in way over his head – but we shouldn’t blame him, because it wasn’t his idea. On this reading, the secretary of state is, if anything, pointing an accusing finger at his boss: I know I’m rubbish at this, but it’s Trump’s fault for picking me.


Jonathan Malthorpe is more blunt. Tillerson, he writes, is "clueless:"

His priorities so far are to toady to the world’s autocrats (perhaps reflecting the instincts of his boss in the Oval Office), while maintaining Washington’s role as the leader of a 60-year alliance of democracies is well down his list of concerns.

Tillerson’s tour of Asia last week appears to have given China a diplomatic coup and unsettled Washington’s Asian allies. They already had good reason to be twitchy after Trump jettisoned the Trans-Pacific Partnership — a 12-nation trade and security agreement aimed at containing China’s regional power ambitions — and opined that Japan and South Korea should perhaps get their own nuclear weapons instead of relying on the U.S. for their defence.

And now it has been announced that Tillerson is going to skip a summit of the foreign ministers of the 28 members of the North Atlantic Treaty Organization (NATO) next month. He wants to be in the U.S. for a planned visit by Chinese leader Xi Jinping.

Trump has just sent a budget proposal to Congress that envisages cutting the State Department’s funding by 30 per cent and slashing other soft-power agencies in a similar way while throwing money at Defense and other armed agencies. This proposed budget won’t survive the process of going through Congress in recognizable form. They never do. But the virgin document speaks volumes about Trump’s view of the world.


It's Trump's vision of the world that's the problem. And, clearly, Tillerson's State Department is not going to champion an alternative universe.

Image: slate.com
Posted by Owen Gray at 8:49 am

Email ThisBlogThis!Share to TwitterShare to FacebookShare to Pinterest
Labels: Trump And Tillerson At State

Tillerson has added that his wife talked him into accepting the sec state job, telling him that Trump's offer was proof that "God isn't finished with you yet." Kind of sounds like he was doing God's work at Exxon, doesn't it? Now he's still following in the Savior's path as defender of American global hegemony. The Lord surely works in mysterious ways eh Owen?

Theirs is a strange faith, Mound. Apparently wealth and salvation go hand in hand.


At this point I think were due for a re-write of Matthew:

"And blessed are the meek for they shall inherit what's left of the earth".

A little humility would do us all good, JM.

It wouldn't be remiss to simply replace them with the Woes of the Pharisees.

It may be that we will experience plagues of Biblical proportions, Dana.

The USA Evangelists are just s dangerous as ISIS; if not more so.
Both seek to promote their agendas by force.

They'll convert you, TB -- even if they have to knock the hell out of you.

"His priorities so far are to toady to the world’s autocrats (perhaps reflecting the instincts of his boss in the Oval Office), while maintaining Washington’s role as the leader of a 60-year alliance of democracies is well down his list of concerns."

This self-deluded, self-righteous liberal bullshit. "Toady to the world's autocrats." Another reference to the Great Satan, Vladimir Putin. Because Putin is a BAD MAN. And Donald Trump has said some nice things about him. Oh, and Trump also doesn't want to risk a nuclear war with Russia.

Because only Trump has toadied to autocrats. If "toadying" means following policies that aren't detrimental to them, what about Obama and the Saudis? Or Obama and the coup in Honduras? Or Obama (and Clinton) on Egypt's past and present dictators? What about Justin Trudeau selling weapons to the Saudis? Or Jean Chretien slobbering over Indonesia's Suharto (and suppressing the rights of Canadian citizens to protest the dictator's presence in Canada)?

What about our "Third Amigo" Mexico, run by election-stealing, mass-murdering right-wing governments?

What about the whole damned sickening parade's continued toadying to the racist, murderous apartheid state of Israel?

Trump is an idiot. But this insane liberal pile-on about one of the only sane things he's ever said makes me weep for the future of humanity.

You're right to weep for the future of humanity, thwap.