The Rich Are Different From You And Me 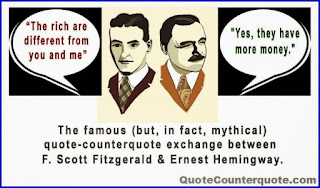 The wealthy still call the shots. If you doubt that assertion, consider recent revelations about Fintrac. Alan Freeman writes:

Time and again, Fintrac and the Canadian government have been called out by the Financial Action Task Force, an intergovernmental group that develops international standards in the fight against money laundering, for weak laws and half-hearted enforcement. Instead of being a leader, Canada has earned a reputation as a laggard in this battle.

This lukewarm commitment by Ottawa to policing money-laundering wasn’t helped by a Supreme Court of Canada ruling in 2015 that exempted lawyers from mandatory reporting of suspicious transactions, accepting the view that this would somehow violate solicitor-client privilege. Welcome, kleptocrats. Canada is beckoning.


If you want to launder money, you need secrecy. And Fintrac can and does provide it:

Then, last April, Fintrac finally landed a big fish. For the first time, a bank had been caught breaking the rules by failing to report a suspicious transaction and an undisclosed number of money transfers. It was fined a record $1,154,670 — but Fintrac decided to undermine its own action by using its discretion and refusing to name the guilty party.

Again, it was the dogged work of journalists — at the Toronto Star, National Observer and CBC — that identified Manulife Bank of Canada, a subsidiary of one of our biggest life insurance companies, as the offending institution. According to these reports, Manulife was guilty of five different violations of the law, including failure to report a suspicious transaction with a client who was a convicted felon and failure to report 1,174 international wire transfers of $10,000 or more involving other clients, as well as an overall lack of anti-money-laundering policies.


The little guys haven't received that kind of treatment:

While Manulife could hide in obscurity, protected by Fintrac’s discretion, dozens of tiny outfits have been named and shamed by the same agency and have paid the price in lost reputation. “It’s very unfair to name someone and not name someone else,” Michael Baumbach of the Diamond Exchange told the Toronto Star after his business, which has three employees, was named by Fintrac and fined $12,750 for violations on the same day that Manulife was fined and got its omerta protection. Why Fintrac has named 40 of its violators over the past nine years while protecting the identities of the other 55 is anybody’s guess.


There is a myth that F. Scott Fitzgerald once told  Earnest Hemingway, "The rich are different from you and me." Hemingway responded, "Yes, they have more money." The incident never happened. But the point behind it is still true.  The rich buy influence. And, thus, they have more power.

Email ThisBlogThis!Share to TwitterShare to FacebookShare to Pinterest
Labels: Fintrac

Own you read my mind, but I may be thinkingaboot something greater.

The facts is, that power and money after a certian point make you Trump, and we will all see this national suicide.

Thanks for the link, Steve. Power corrupts. And wealth can do the same thing.

Personally, I see FINTRAC's timidity around the big financials as simply a reflection of Trudeau's pursuit of the same neoliberal policies so religiously embraced by the Harper government. It is becoming increasingly apparent that the new emperor has no clothes, Owen.

It appears that the new boss is a younger version of the old boss, Lorne.

More and more Owen, these organizations like Fintrac, set up by the government to monitor any questionable money transactions, in this case money laundering, in fact ignore, or protect these companies. This also includes institutions like the CRA and the government itself. The bigger the company, the greater the discretion.

It's almost like intergovernmental groups like Fintrac & others are set up to give the impression to the Canadian public that the government is doing something about illegal financial violations, when in fact they are doing the minimum, while protecting companies like Manulife Bank of Canada from public exposure.

Trudeau governs for special interest groups,especially for the corporate elite. Canadians are of no interest, but can't be completely ignored, so when the government does deign to address them, they are lied to about what's really going on.

As the Mound of Sound says, Pam, it's about regulatory capture. Once you own the agency that makes the rules, you're home free.

I wonder how FINTRAC and BC Lotteries are getting along these days?