The Hypocrites Are In Charge 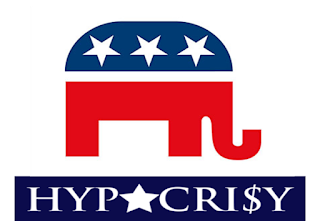 There is much to despise about Donald Trump. But Jonathan Freedland points out that Trump is not the only villain in the present drama, which is straight out of the Theatre of the Absurd. The Republican Party --  with a couple of exceptions -- have thrown their lot in with Trump:

Sure, Republican senators John McCain and Lindsey Graham vow to hold Trump to account. But the rest of them are profiles in moral weakness, prepared to turn two blind eyes to the actions of the president simply because he wears the right party colours. So Devin Nunes, chair of the House intelligence committee, which should be investigating all this, says “there’s nothing there”. His colleague Jason Chaffetz, who chairs the House oversight committee, declined to look into the Flynn affair because “it’s taking care of itself”. Oversight, it seems, is precisely the right word. But please don’t get the impression that Chaffetz is lethargic in his supervisory duties. On the contrary, there’s one scandal he’s very keen to investigate even now: Hillary Clinton’s use of a private email server.

It’s Republicans who are making a mockery of Trump’s claim to speak for the forgotten millions by planning a tax cut that will send billions of dollars into the pockets of the very richest. It’s Republicans who devoted years to denouncing Obamacare, promising to replace it with a system that would miraculously provide better healthcare to more people for less money. Now that they’re in charge, that’s been exposed as the magical thinking it always was. Trump is the face of that idiocy – saying this week that, “Nobody knew that healthcare could be so complicated”, when in fact everybody but him and the blowhards on Fox News knew precisely that many, many years ago.


The Republican Party is the Party of Hypocrisy:

For decades, Republicans cast themselves as the party of family values, wagging their finger at anyone who had fallen short of the moral standards they set. But when Trump came along, promising them the tax cuts and seats on the supreme court they craved, all that went out of the window. Suddenly they were prepared to embrace a thrice-married worshipper of mammon who brags about sexually assaulting women and was happy to assess his own daughter as “a piece of ass”. Note the polling on white evangelical Christians. In 2011 they were the group least likely to accept that a candidate guilty of immoral behaviour in their personal life might nevertheless be able to act ethically as a leader. Now they are the by 2017 to become the most forgiving on that score.

And of course, for decades Republicans wrapped themselves in the flag, claiming a monopoly on patriotism, casting themselves as the heirs to Ronald Reagan and all those who stood strong against Russian authoritarianism. Yet now, delegates to the CPAC ultra-conservative conference will happily wave little Russian flags, so long as they have Trump’s name on them.


Hypocrisy is nothing new in politics. But the Republicans have made Hypocrisy their calling card. And the hypocrites are in charge.

Ideology and a lack of critical thinking skills, Owen. Those are the things Trump enablers are counting on, likely with very good reason. Oh, and of course their very own private propaganda channel, a.k.a., Fox 'News'.

Con men -- and women -- know that the best marks are those who are too lazy to think, Lorne. And the ranks of the lazy are growing.