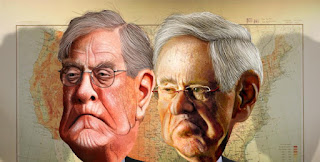 When David Koch was the Libertarian Party's vice presidential candidate in 1980, he and his running mate, Ed Clark, advocated the abolition of public schools, social security and taxation. They garnered one percent of the vote. Koch took the appropriate lesson from the experience. Third parties in the United States are non starters. If you seek political power, you have to capture one of the two major parties. And so, Linda McQuaig writes, Koch and his brother Charles set out to take over the Republican Party:

Operating mostly behind the scenes, and driven by an abiding hatred of government and anything that smacked of distributing wealth more broadly, the Kochs invested massively over the next few decades in creating a vast network of think-tanks, academic programs, front groups, political action groups and campaigns, lobbyists and politicians, as New Yorker writer Jane Mayer documents in her powerful book Dark Money.


With the election of Donald Trump, they have achieved their objective:

Trump's independence may be overstated; his vice president, Mike Pence, has been a major recipient of Koch money and was Charles Koch's first choice for president in 2012. Pence has brought Koch operatives into the White House and shows signs of becoming a Dick Cheney-style puppet master. For that matter, the Kochs are only an impeachment away from having their guy running the free world.

The role of Koch money in shaping Republican politics gets surprisingly little media attention. But it helps explain the otherwise baffling behaviour of Republican politicians scrambling to justify stripping health coverage from their constituents and using the savings to pay for $600 billion worth of tax cuts for the rich. Awkward.

Meanwhile, many Republicans in the "freedom caucus," who've been heavily funded by the Kochs, consider the proposed reform too generous to the disadvantaged.

Who says you can't buy a government?

Image: rabble.ca
Posted by Owen Gray at 9:23 am

Email ThisBlogThis!Share to TwitterShare to FacebookShare to Pinterest
Labels: Republicans And The Koch Brothers

Add to this the Koch money that has found its way into Canadian think tanks; the Fraser Institute and Manning Centre come to mind.

The Koch tentacles have a long reach, Toby.

Owen, when you observe the smirking Pence behind Trump, during his many his many bizarre public engagements, you get that feeling that Trump is doing the heavy lifting for the Kochs and their ilk. Once they have complete control of all federal government entities, they will work on the impeachment of The Donald allowing their man Pence to become the POTUS. RG

You really do have to wonder if that's been their plan all along, RG.

The question is Owen, who is there to stop the Koch brothers and others like them. No one! Their power over the government has become almost completely entrenched.

I agree, Pam. They know how to buy politicians. And politicians can be sold to the highest bidder.


Galbraith discusses this at length in "The Predator State." It's a very worthwhile read.

Thanks for the tip, Mound. From what I read, he's following in his father's footsteps.

Any chance the Koch brothers are behind those nasty anti-Horgan/NDP ads running in BC?

Good question, Toby. It's a sure bet that what Horgan and the NDP stand for is not what the Kochs stand silently behind.