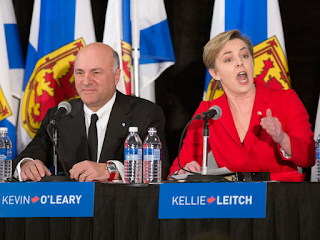 Around the world, immigrants are becoming the enemies of those who see themselves as "we, the people." South of us, that rage wears a large orange face. But the disease is creeping north, across the border. Andrew Coyne writes:

Whether it is Kelly Leitch’s insinuation that immigrants need to be instructed in such Canadian values as hard work (“Do you recognize (you) can’t expect to have things you want given to you?”) or Kevin O’Leary’s instantaneously discovered concern for closing the “loophole” in Canada’s refugee system (“Canada can’t afford to sit back & watch thousands of people walk right into our country … pretending to be refugees”) or Maxime Bernier’s weird demand that immigration policy “should not aim to forcibly change the cultural character and social fabric of Canada,” there’s evidently a market for this sort of thing.


The debate is all about the meaning of citizenship and the assumptions which underlie the concept:

One is the notion that birthright — where you were born, or who you were born to — should confer automatic right to citizenship. Heredity is not usually considered an appropriate basis for assigning  status and rights in modern societies. Yet while a landed immigrant may live and work here for years without being entitled to citizenship, should you have been born here while your parents were changing flights en route to Mongolia, you’re considered one of us.

The other, more basic assumption is that those born here have the automatic right to prevent others from joining them. Of course any society is entitled to set the terms of the social contract, that is the rights and obligations that go with membership, such as paying your taxes, obeying the law and so forth. But immigrants are not asking to be let out of the social contract: they ask only to be allowed to sign it. That they are nonetheless prevented from doing so, and on no other basis than where they were born, seems arbitrary in the extreme.

And there's the rub. Some of us have been blessed with good fortune. Others, like the millions of displaced people these days, seem to be followed by ill fortune and ill will wherever they go. Coyne reminds his readers that those of us who have the benefit of good fortune need to walk in the shoes of the displaced:

Certainly there is no “natural” or “right” level of population for a country, but if there were it would be an astonishing coincidence if, wherever we were, we should happen to be precisely at it. And yet that is the very thing our immigration restrictionists assert. Indeed, they always have.


If the restrictionists had had their way, most of us wouldn't be here.

Image: The National Post
Posted by Owen Gray at 8:37 am

Email ThisBlogThis!Share to TwitterShare to FacebookShare to Pinterest
Labels: The Immigration Debate

Funny, they don't seem to want to talk about how many immigrant millionaires are allowed in every year.

Can you imagine Leitch or O'Leary lecturing millionaires the same way?

If you're right, Dana, we could be in for a very rough ride.

Buying admittance? It's got to involve Big Ideas and Rock Stars to hold my attention. That’s the kind of immigration that meets the requirements of my Canadian values.

I've wondered to what extent beyond sharing in the publicity generated by the announcement that O'Leary Ventures became involved with Jason's "new" fast-track Startup Visa program for foreign entrepreneurs.

I've also wondered about what money and hands might have been involved in the transactions and what vibrant and dynamic entrepreneurial ventures actually emerged from the undertaking once the few dozen or so that participated, along with their kids and cousins, got their visas stamped. Provincial Nominee programs, anyone? Maybe we should ask Anne of Green Gables.

Thanks for the link, John. The "principle" is utterly transparent: Show me the money.

That’s right, Owen. Many of the principles that we claim to have used as guides to our understanding of the great questions of our time are derived through simple disposition. In light of the rationalizations that we’re currently witnessing, that brand of hypocrisy would seem to apply thoroughly to the investment class and the CRAP Party in general, and particularly to Mr. O’Leary given his statements on the refugee issue and the modifications he has applied less recently to his principled libertarian position on the TFWP question.

O'Leary assumes, John, that everything has a price -- and that the only thing that is debatable is whether or not the price is too high.