Not Exactly As They Appear 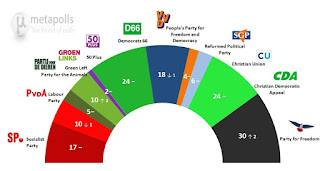 There was a collective sigh of relief when Geert Wilders did not come out on top in the Netherlands election. But Tom Walkom warns that all is not sweetness and light:


Wilder’s Freedom Party still did well. It came a strong second, winning five additional seats in the 150-person legislature, for a total of 20.

More important, other parties felt compelled to ape Wilders, at least in part.

The Christian Democratic Appeal, another conservative party, campaigned on a nationalist platform that included banning dual citizenship and requiring schoolchildren to sing the national anthem.

That, too, worked. The Christian Democrats saw their seat total rise from 13 to 19, virtually guaranteeing them a central role in whatever coalition government emerges.

Much has been made of Jesse Klaver’s Green Left party, which saw its seat share rise from four to 14.

The 30-year-old Klaver is of Moroccan and Indonesian heritage. He supports immigration, the EU and efforts to combat climate change. With his movie-star looks and dark, wavy hair he has been called Holland’s Justin Trudeau.

His success, as well as that of the pro-Europe D66 party, which went from 12 to 19 seats, underlines just how complicated the new populism is.

And, as is the case with any coalition government, everything depends on how well Rutte can get a team of rivals to work together. If he fails, the number two man may step in.

Things are not exactly as they might first appear.

Image: Metopolis
Posted by Owen Gray at 8:18 am

Email ThisBlogThis!Share to TwitterShare to FacebookShare to Pinterest
Labels: The Netherlands Election

I lived and worked in Amsterdam between 1969 and 1971. My friend and I had hitchhiked through Europe and were planning to stay for about 6 months. When we landed in Amsterdam it didn't take me long to fall in love with Holland. I told my friend, I wasn't going back to Canada and lived in Amsterdam for close to 2yrs.

At that time Holland was one of the most progressive welcoming countries in the world.There was no talk of adhering to Dutch Values, doing away with dual citizenship, or singing the Dutch national anthem in school.In it's attitude toward social democracy and giving rights to all people was very sophisticated. These included rights for prostitutes and gays that did not exist in many other countries. Marijuana was also legal.As a side issue the Dutch government would assign a child each year to tend to the grave of a Canadian soldier. There were 8000 Canadian soldiers who died liberating Holland. The Dutch have never forgotten.

Looking at how rightwing Holland has become I find very sad. It does not even seem like the same country I once knew. Tom Walkom, once again, as per his usual analysis is spot on.

It's a lesson that has been repeated before, Pam. Countries which are the seats of enlightenment and tolerance can be ruined by the small minded and mean spirited.